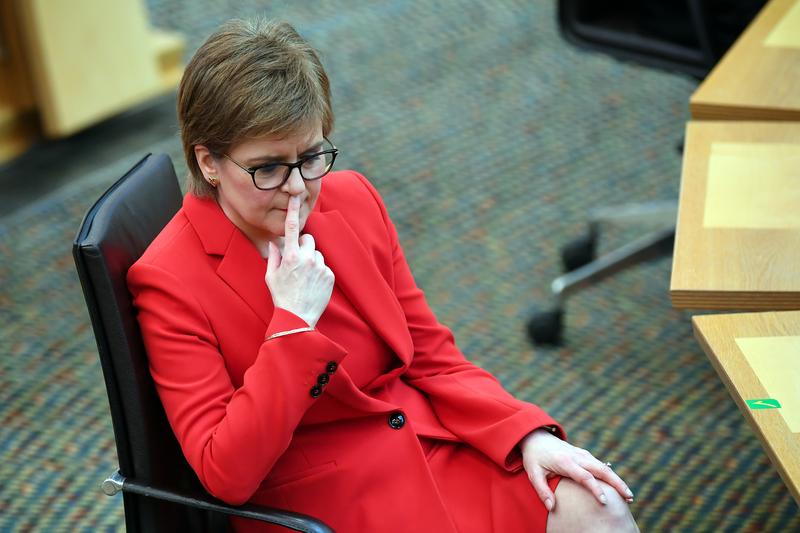 LONDON (Reuters) – A Scottish parliamentary committee said on Tuesday First Minister Nicola Sturgeon had misled it over evidence she gave on her handling of sexual harassment complaints, the latest twist in a row that could sink her hopes for an independent Scotland.

Sturgeon has been under intense scrutiny over what she did and did not do when she learnt of complaints by several women against her predecessor Alex Salmond – once her close friend and ally in the independence cause, now an implacable enemy.

The allegations against Salmond were first made in 2018, but the drama really erupted last month when, in explosive testimony to the committee, he cast doubt on Sturgeon’s actions and said her government had acted unlawfully.

Salmond, who was acquitted in 2020 of charges of sexual assault, portrayed himself as the victim of a conspiracy to drive him out of public life. Sturgeon says that is absurd.

The issue of how Sturgeon and her administration dealt with the complaints against Salmond has upended Scottish politics at a time when the stakes could hardly be higher.

A Scottish parliamentary election will take place in May, and Sturgeon has vowed to press for a second referendum on independence from the United Kingdom if her Scottish National Party (SNP) wins an absolute majority.

Scots voted 55% to 45% to stay in the UK in a 2014 referendum, but the SNP says Scotland should now hold another vote due to Brexit. Britain voted in a 2016 referendum to leave the European Union, but a majority of Scots wanted to remain.

The parliamentary committee set up to examine the complaints issue concluded on Tuesday the Scottish government’s handling of the matter was “seriously flawed”.

On one issue the committee found that Sturgeon’s written evidence provided “an inaccurate account of what happened, and she has misled the Committee on this matter. This is a potential breach of the Ministerial Code”.

SNP members disagreed with these conclusions, and she has already dismissed the parliamentary committee as being partisan.

Its findings came the day after an independent inquiry by a senior lawyer concluded she had not broken the ministerial code in any of her dealings with Salmond. [nL8N2LK4LE]

Tuesday’s verdict is unlikely to put Sturgeon’s job at risk, but it adds to her political headaches.

Before the Salmond row blew up, polls had suggested the SNP was on course for a clear majority. Surveys now show the outcome is far less certain, with Sturgeon’s popularity dented by an endless stream of negative headlines about the Salmond affair.

Scottish members of British Prime Minister Boris Johnson’s Conservative Party are holding a vote of no confidence in Sturgeon in the Scottish parliament later on Tuesday, but this is highly unlikely to succeed.

“The committee verdict is in – Nicola Sturgeon misled Parliament and the public,” said Murdo Fraser, the Scottish Conservative spokesman on the Salmond inquiry.