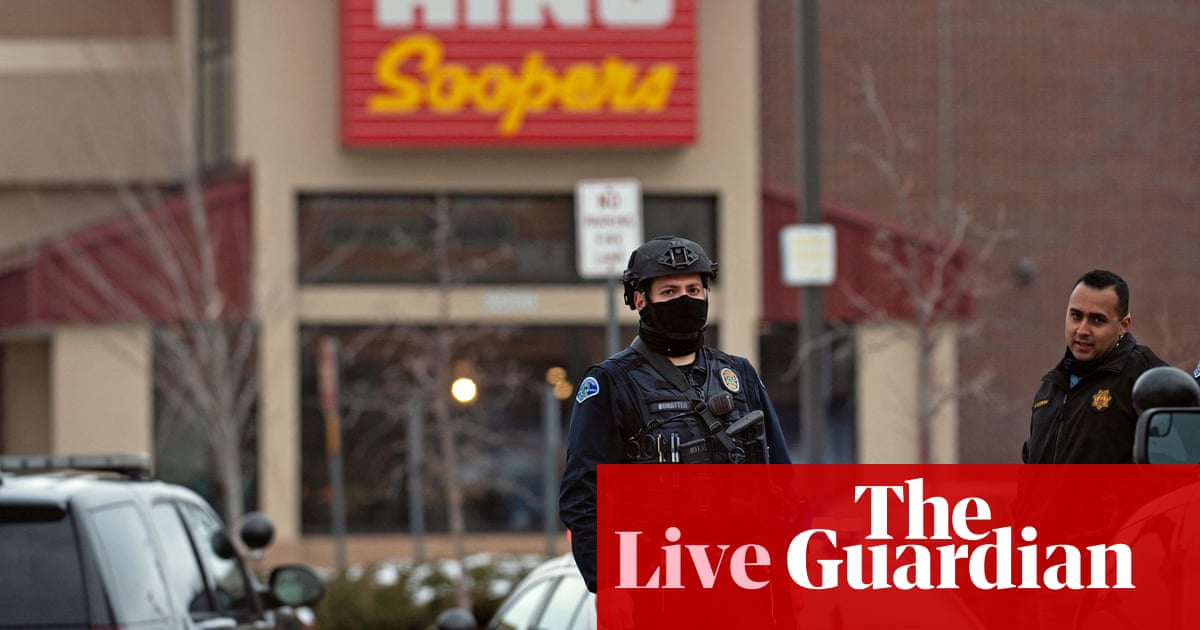 The press briefing in Boulder has ended, but there are still a number of key details about this afternoon’s shooting that have yet to be released.

Police appear to be waiting to notify family members of the victims before they confirm the number of fatalities.

At the first press briefing, Commander Kerry Yamaguchi with the Boulder Police Department could not release many details about the shooting at King Soopers grocery store in Boulder, Colorado this afternoon, saying they were still in the early stages of the investigation.

All he could say at this time was that there were multiple fatalities, including one Boulder police officer. Just four hours since the first call came in about the shooting, the police department was still notifying the victims’ families.

One person of interest was in custody, and that person was injured in the incident. No other injuries were reported.

One person of interest is in custody, police said. That person was injured in the incident and is being treated for the injuries.

Multiple people were killed in the shooting in Boulder, Colorado, including one Boulder police officer, police confirmed.

Joe Biden also has his eyes on the shooting in Boulder, Colorado:

We’re keeping the liveblog open a little later while we learn more about the shooting in Boulder, Colorado. Police are expected to address the media momentarily:

Nick Tilsen, a Lakota activist who was arrested while leading a protest before Donald Trump’s visit to Mount Rushmore last year, said he has negotiated with prosecutors to drop charges against him, the Associated Press reports.

Tilsen, the president of an Indigenous advocacy organization called NDN Collective, told the Associated Press that he will participate in a prison diversion program in exchange for all but one charge against him being dropped – assault of a law enforcement officer.

Tilsen faced up to 17 years in prison not for physically assaulting officers but for using “physical menace or credible threat” to put them “in fear of imminent bodily harm”. He had helped organize a demonstration that used vans to form a blockade on a road leading to Mount Rushmore to call for the Black Hills, which were seized from the Lakota despite treaties with the United States, to be returned to Indigenous control. For the Lakota people, the area is sacred and known as Paha Sapa — “the heart of everything that is.”

“The fact that the State is dropping these charges reveals that these were politically and racially motivated charges to begin with, exposing both the Sheriff and State prosecutor’s ill intent to abuse their positions of power to suppress our movement and overcriminalize Indigenous people,” Tilsen said in a statement. “How do I go from facing nearly 17 years in jail, to all charges being dropped? We organized, we fought, and we backed them into a corner where there was no longer any political upside for them to continue this unjust prosecution of myself and the other Land Defenders.”

The active shooter situation in Boulder, Colorado is still ongoing and authorities have not released much information from the scene at King Soopers grocery store.

It’s unclear if anyone has been killed or injured.

Police are responding to an active shooter situation in Boulder, Colorado where there appear to be at least several injuries.

The situation is still unfolding, but if confirmed as a mass shooting, this will be the 102nd in the US since the start of the year, according to Gun Violence Archive.

The Senate is on the floor voting on the nomination of Democratic Boston mayor Marty Walsh for labor secretary.

Arizona will open vaccine eligibility up to all residents 16 and older starting on Wednesday.

“Our goal has been and remains to get vaccine into the community as quickly, widely and equitably as possible,” Doug Ducey, Arizona’s governor, said in a press release. “Given a thorough review of vaccination data, anticipated vaccine supply, and current demand among prioritized groups, now is the time to take this critical next step.”

Arizona has so far administered more than 2.9m vaccines, according to the Centers for Disease Control, at a rate of 40,432 per 100,000 residents.

Hey all, Vivian Ho on the west coast, taking over the blog for the brilliant Joan Greve.

In the next hour, the Senate is expected to consider on the nomination of Marty Walsh for labor secretary. So hang tight.

That’s it from me today. My west coast colleague, Vivian Ho, will take over the blog for the next few hours.

Here’s where the day stands so far:

Vivian will have more coming up, so stay tuned.

Moments ago, Lt Gen Karen Gibson was sworn in as the new sergeant at arms of the Senate.

The Senate majority leader, Chuck Schumer, noted that this will be the first time that the sergeant at arms leadership team will be comprised entirely of women.

“Lt Gen Gibson has a tall order, but I have every confidence that she will perform her duties at the same exemplary standard she set over the course of her three-decade military career,” Schumer said. “Lt Gibson is ready to go.”

The former Senate sergeant at arms, Michael Stenger, resigned a day after the Capitol insurrection on January 6.

Miami Beach officials have extended their spring break-related curfew into April, as police say they have arrested more then 1,000 people so far during this spring break season.

Miami Beach officials have extended a curfew and state of emergency into April, in response to large spring-break crowds of partygoers who have celebrated in the area’s bars and beaches despite the coronavirus.

The throngs of young people holidaying in Miami Beach have prompted a crackdown by police, which has included the use of ‘pepper balls’ fired into the crowds.

Miami Beach city commissioners said they were extending a curfew from Thursdays through Sundays between 8pm and 6am through 12 April.

Police say they have arrested more than 1,000 people – about twice as many as they arrested last year – during this spring break season. They say the curfews are necessary to maintain order, according to the local CBS affiliate.

Britain and the EU have taken joint action with the US and Canada to impose parallel sanctions on a senior Chinese officials involved in the mass internment of Uighur Muslims in Xinjiang province in the first such western action against Beijing since Joe Biden took office.

The move also marked the first time for three decades the UK or the EU had punished China for human rights abuses, and both will now be working hard to contain the potential political and economic fallout. China hit back immediately, blacklisting MEPs, European diplomats and thinktanks.

The US and Canada also imposed sanctions on several senior Chinese officials as part of the coordinated pressure campaign.

The UK foreign secretary, Dominic Raab said that China’s treatment of the Uighur minority was “the largest mass detention of an ethnic and religious group since the second world war”.

Evidence of repression in Xinjiang “is clear as it is sobering,” Raab said.

The sanctions will be imposed immediately and include travel bans and asset freezes against four officials, Raab told MPs.