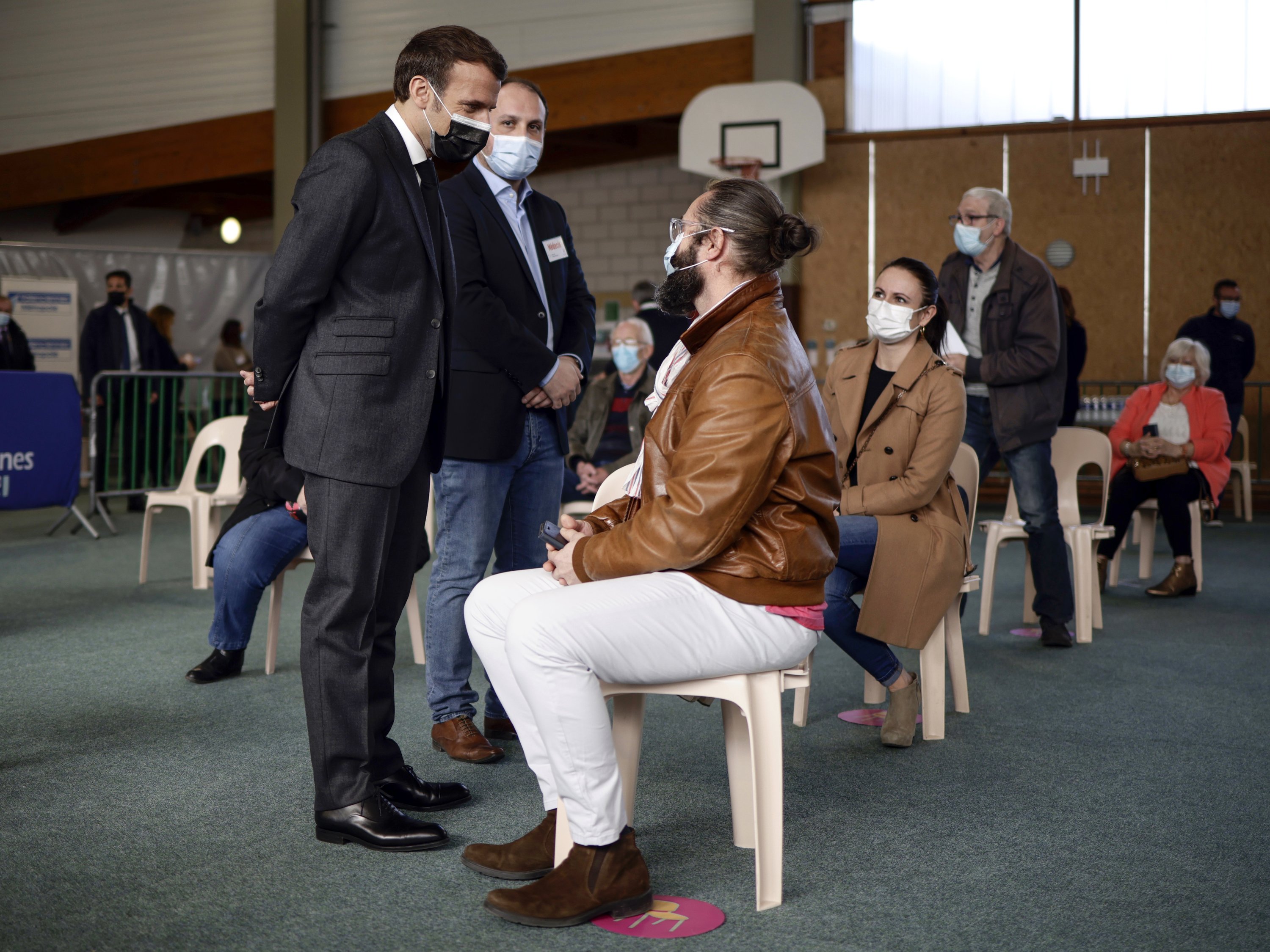 PARIS — President Emmanuel Macron is changing strategies and pushing for mass vaccinations with coronavirus infections on the rise in northern France and the Paris region.

“The heart of the battle, in the coming weeks and months, will be the vaccination,” Macron said Tuesday in announcing lowering the age group of those eligible for shots from 75 to 70 years starting this weekend.

The Health Ministry says about 200 “mega-centers” will administer as many as one million shots per week. Some could be in place by the end of the month.

“There are no holidays, no weekends. We must vaccinate every day, vaccinate in the evenings, too,” Macron said while visiting a gymnasium converted to a vaccine center and pharmacy in the northern town of Valenciennes.

France added 344 confirmed deaths in the past day, increasing the total to 92,650 deaths by Monday night.

— Dr. Fauci warns of possible virus surge in US, need to vaccinate

— One Good Thing: Artist Yang Qian is channeling her memories from the height of the pandemic into artwork

BRUSSELS — The head of the European Union’s medicines agency says the agency still needs additional data from the makers of Russia’s Sputnik V coronavirus vaccine as it evaluates the shot.

The European Medicines Agency is currently assessing whether to authorize Sputnik V for use in the 27-nation bloc.

Speaking Tuesday to European Parliament lawmakers, EMA Executive Director Emer Cooke said, “we still have some additional questions that the company needs to supply us with. We have to wait for that data to be submitted” before the vaccine can be evaluated.

Cooke says the agency is planning inspections of “manufacturing and clinical sites in Russia” and cannot give a timeframe for approval of the Russian vaccine.

Cooke also told lawmakers that supplies of the fourth vaccine approved by the agency, made by Johnson & Johnson’s Janssen facility in the Netherlands, “are not expected to be available until sometime in April.”

NEW DELHI, India — India will start vaccinating everyone over age 45 starting April 1, with new infections on the rise the past few weeks.

Federal information minister Prakash Javadekar made the announcement on Tuesday, when more than 40,000 new cases were detected in the past 24 hours. Most infections are in Maharashtra state in India’s western coast. But cases have spiked in other states like Punjab, Gujarat, Chhattisgarh, Karnataka and Tamil Nadu.

So far, India’s vaccination had focused on the elderly or those over 45 with ailments such as heart disease or diabetes. The vaccine is being offered for free at government hospitals and sold at a fixed price of 250 rupees or $3.45 per shot at private hospitals.

India has given the green signal for the use of two vaccines — the AstraZeneca vaccine made locally by Serum Institute, and another by Indian vaccine maker Bharat Biotech. The minister says India had sufficient supplies of vaccines.

Javadekar added the interval between the two doses of the AstraZeneca vaccine, being made in India by Serum Institute, would be increased to up to eight weeks, compared to 4-6 weeks advised earlier.

TARRYTOWN, New York — A large new study adds evidence that quick use of a drug with antibodies to fight COVID-19 can help prevent serious illness.

Regeneron Pharmaceuticals says tests in more than 4,000 recently diagnosed patients found its two-antibody combo drug cut the risk of hospitalization or death by 70%. All in the study were outpatients and at risk of developing serious illness because of age or other health conditions such as obesity or high blood pressure. The drug also cut the median recovery time from 14 days to 10.

The drug’s benefits were similar at half of the dose currently allowed in the United States under emergency use provisions. The company says it would ask regulators to allow the lower dose, too.

The results haven’t been published or reviewed by independent scientists yet. The drug is given once, through an IV, and the company also is testing it in shot form, which would make it easier to use.

Previously, Eli Lilly announced that its two-antibody treatment also reduced the risk of hospitalization or death in similar patients.

WASHINGTON — Dr. Anthony Fauci is warning that a surge of coronavirus cases in Europe could foreshadow a similar surge in the United States.

Fauci, the nation’s top infectious disease doctor, is urging Americans to remain cautious while the nation races to vaccinate its citizens.

In an interview on ABC’s “Good Morning America,” Fauci says he is “optimistic” of the vaccines’ effectiveness and expressed hope that AstraZeneca’s vaccine could join the arsenal of inoculations.

He deemed it an “unforced error” that the company may have used outdated data, perhaps providing an incomplete view of its effectiveness. But he says Americans should take comfort knowing the FDA would conduct an independent review before it was approved for use in the United States.

AstraZeneca reported Monday that its COVID-19 vaccine provided strong protection among adults of all ages in a long-anticipated U.S. study, a finding that some experts hoped would help rebuild public confidence in the shot around the world and move it a step closer to clearance in the U.S.

BRUSSELS — A leading European Union official has lashed out at the AstraZeneca vaccine company for its massive shortfall in producing doses for the 27-nation bloc, and threatened that any shots produced by them in the EU could be forced to stay there.

Sandra Galina, the chief of the European Commission’s health division, told legislators on Tuesday that while vaccine producers like Pfizer and Moderna have largely met their commitments “the problem has been AstraZeneca. So it’s one contract which we have a serious problem.”

The European Union has been criticized at home and abroad for its slow rollout of its vaccine drive to the citizens, standing at about a third of jabs given to their citizens compared to nations like the United States and United Kingdom.

Galina says the overwhelming responsibility lies with the AstraZeneca vaccine, which was supposed to be the workforce of the drive, because it is cheaper and easier to transport and was supposed to delivered in huge amounts in the first half of the year.

“We are not even receiving a quarter of such deliveries as regards this issue,” Galina said, adding AstraZeneca could expect measures from the EU. “We intend, of course, to take action because, you know, this is the issue that cannot be left unattended.”

The EU already closed an advance purchasing agreement with the Anglo-Swedish company in August last year for up to 400 million doses.

MANILA, Philippines — Philippine President Rodrigo Duterte’s spokesman is warning that the government will forcibly close Roman Catholic churches in the capital if priests proceed with a plan to hold masses. That plan is in defiance of new restrictions against public meetings, including religious gatherings, to ease an alarming surge in coronavirus infections.

Presidential spokesman Harry Roque said Tuesday that such exercise of the state’s police powers would not violate the constitutional principle on the separation of church and state and religious freedom, amid the pandemic in Asia’s largest Catholic nation.

“In the exercise of police powers, we can order the churches closed and I hope it will not come to that,” Roque said in response to a question during a televised news conference. “We won’t achieve anything … if you will defy and you will force the state to close the doors of the church.”

The administrator of the dominant Roman Catholic church in Manila and nearby suburbs said in a pastoral instruction that no processions and motorcades and other street activities would be held during the Lenten period and Easter but added religious worship would be organized inside churches starting Wednesday for a limited number of churchgoers.

’It is sad that we will again be physically limited during the holiest days of the year for us,” Bishop Broderick Pabillo said.

The Philippines has reported more than 677,000 confirmed COVID-19 infections, with nearly 13,000 deaths, the highest totals in Southeast Asia after Indonesia.

The Data and Safety Monitoring Board said in a statement early Tuesday that it was concerned that AstraZeneca may have provided an incomplete view of the efficacy data.

AstraZeneca reported Monday that its COVID-19 vaccine provided strong protection among adults of all ages in a long-anticipated U.S. study, a finding that could help rebuild public confidence in the shot around the world and move it a step closer to clearance in the U.S.

In the study of 30,000 people, the vaccine was 79% effective at preventing symptomatic cases of COVID-19 — including in older adults. There were no severe illnesses or hospitalizations among vaccinated volunteers, compared with five such cases in participants who received dummy shots — a small number, but consistent with findings from Britain and other countries that the vaccine protects against the worst of the disease.

AstraZeneca also said the study’s independent safety monitors found no serious side effects, including no increased risk of rare blood clots like those identified in Europe, a scare that led numerous countries to briefly suspend vaccinations last week.

The company aims to file an application with the Food and Drug Administration in the coming weeks, and the government’s outside advisers will publicly debate the evidence before the agency makes a decision.

Authorization and guidelines for use of the vaccine in the United States will be determined by the Food and Drug Administration and Centers for Disease Control and Prevention after thorough review of the data by independent advisory committees.

Moon on Tuesday received his shot at a public health office in downtown Seoul along with his wife and other presidential officials who plan to accompany him during the June 11-13 meetings.

Moon’s office said he was feeling “comfortable” after receiving the shot and complimented the skills of a nurse who he said injected him without causing pain.

The office said Moon will likely receive his second dose sometime around mid-May.

South Korea launched its mass immunization program in February and plans to deliver the first doses to 12 million people through the first half of the year, including elders, frontline health workers and people in long-term care settings.

Officials aim to vaccinate more than 70% of the country’s 51 million population by November, which they hope would meaningfully slow the virus and reduce risks of economic and social activity.

ISLAMABAD — Pakistan’s foreign minister on Tuesday sought more Chinese vaccines to fight the pandemic as the nation reported 72 deaths from COVID-19 and 3,270 new cases in the past 24 hours.

Shah Mahmood Qureshi made the request during a telephone call to his Chinese counterpart Wang Yi.

Qureshi also thanked Beijing for promising 1.5 million doses of Chinese vaccines for Pakistan, saying it had been pivotal to protecting lives. So far, Pakistan has received 1 million of those doses.

The statement quoted Yi as reassuring Pakistan that “China will continue to firmly support Pakistan in its fight against the pandemic.”

Pakistan has reported 633,741 cases among 13,935 deaths from coronavirus since last year.

ORLANDO, Fla. — The number of Floridians eligible for a COVID-19 vaccine expanded on Monday as the state allowed anybody age 50 and up to get the shot.

The county that is home to the state’s biggest theme parks set the bar even lower by allowing anyone age 40 and up to get an injection.

With the loosening of the qualifications, more than a third of Floridians were now eligible solely based on age.

Starting Monday, Orange County expanded the age eligibility a decade lower than the statewide requirement. Reservations were required for the drive-thru site at the Orange County Convention Center in Orlando, and 7,000 appointments were filled within 13 minutes.

In expanding the eligibility, Orange County Mayor Jerry Demings said last week there has been decreasing demand at the site. He said he had notified the state and felt he had the authority to expand eligibility in the county.

DeSantis said he had concerns about Orange County “choosing to prioritize a healthy 40-year-old” over older residents. “It’s not authorized,” said DeSantis.

But Demings said his goal was to get as many people in Orange County vaccinated. “This is about the safety of the people in this community.”