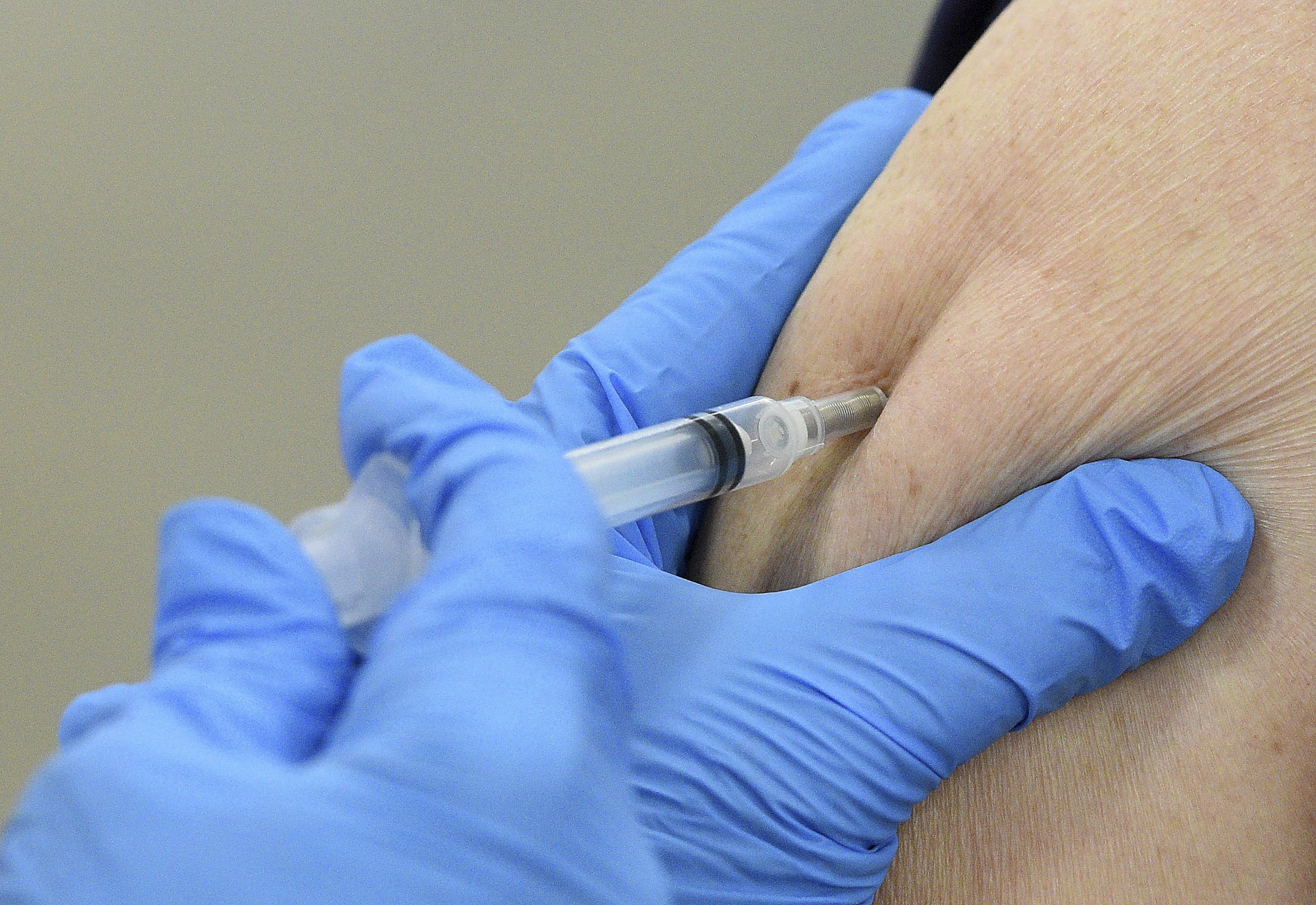 CHICAGO — Chicago is seeing an significant increase in the number of COVID-19 cases in the past week. It’s triggered fresh concerns from top health officials in the nation’s third-largest city.

Chicago’s average number of confirmed daily cases was 350 Tuesday, which was up 23% from the average of 285 the week before.

She says the good news is COVID-19 infection rates by race now more closely match the population. Throughout the pandemic, case rates among Black and Latino Chicagoans have been disproportionately high.

CASES: The seven-day rolling average for daily new cases in the U.S. decreased over the past two weeks from 58,252 on March 7 to 54,307 on Monday, according to Johns Hopkins University.

DEATHS: The seven-day rolling average for daily new deaths in the U.S. decreased over the past two weeks from 1,693 on March 7 to 1,000 on Monday, according to Johns Hopkins University.

— US colleges tout hopes for return to new normal this fall

COLUMBUS, Ohio — The governor of Ohio has vetoed a GOP-backed bill that would limit Ohio governors’ ability to issue orders during a public health emergency, a move promising a showdown with members of his party who have vowed to override him.

Republican Gov. Mike DeWine made good on his earlier promise to veto the latest iteration of the proposal, marking the second time in four months the longtime officeholder has shut down attempts by his fellow Republicans to limit his powers during the coronavirus pandemic.

The executive action came one day after DeWine sent a letter to Rep. Scott Wiggam, of Wooster, pleading with him and majority Republicans to reach a compromise on the proposal.

The Senate bill in question would allow state lawmakers to rescind public health orders issued by the governor or the Ohio Department of Health as soon as they take effect, as well as prevent the governor from reintroducing similar orders for at least 60 days. The bill would also limit state of emergency orders to a period of 90 days but allow lawmakers to extend them in 60-day increments indefinitely.

BERLIN — Authorities in the German capital said staff in secondary schools will get coronavirus vaccinations sooner than previously planned, following demands from teachers that they should be prioritized for the shots.

Berlin authorities had already given priority to some 100,000 staff in elementary schools and kindergartens, arguing that the close contact they have with hundreds of children each week meant they should be protected against the virus.

PHILADELPHIA — The city of Philadelphia is canceling tens of thousands of vaccination appointments for the Federal Emergency Management Agency-run vaccination clinic after links for people to get second doses were shared with others seeking first appointments.

The FEMA site at the Pennsylvania Convention Center has shifted for the next three weeks to giving second doses of either the Pfizer or Moderna vaccines to the about 122,000 people who had received first doses earlier this month at the site.

Philadelphia Public Health Commissioner Thomas Farley said the appointment links with a QR code sent to people who need to come in for the second dose of vaccine were shared or taken from social media posts and have led to thousands of people trying to schedule first appointments that no longer exist.

Farley said city health officials are sending emails and making efforts to contact people who scheduled first appointments to tell them not to come. If people without email access do show up, he said clinic workers will help them sign up for other vaccination sites if they are currently eligible under the city’s priority restrictions or will help them register on the vaccination interest database if not.

ANKARA, Turkey — Daily COVID-19 infections in Turkey surged above 26,000, weeks after the government eased restrictions in dozens of provinces under a so-called “controlled normalization” program.

The Health Ministry reported a total of 26,182 new infections on Tuesday — a level previously seen in December. The death toll reached 30,316, with 138 new deaths — the highest one-day fatality since January.

The government on March 1 divided Turkey’s provinces into four risk categories and allowed restaurants and cafes to re-open in low, medium and high-risk provinces. Weekend lockdowns were also eased in those provinces although nighttime curfews, introduced in late November, are still in place across the country.

WASHINGTON — The White House says 27 million doses of coronavirus vaccines will be distributed next week, more than three times the number when President Joe Biden took office just over two months ago.

Coronavirus coordinator Jeff Zients informed governors on their weekly conference call that 23 million doses of Pfizer and Moderna and about 4 million of Johnson & Johnson’s single-dose vaccine will be shipped next week.

About 18 million of those shots will be given directly to states and jurisdictions to administer, White House press secretary Jen Psaki says. Most of the remainder will go to the federal retail pharmacy program, with a smaller share to federally qualified community health centers.

The administration expects supplies to continue to increase in the coming weeks, which comes as more states are relaxing eligibility criteria for shots. Biden is directing all adults be eligible for vaccines nationwide by May 1, and the U.S. remains on track to have enough supply to cover all adults by the end of May.

The daily death toll was last higher – 603 – on Jan. 19. Italy is struggling with a surge of infections, and health experts say its partly fueled by the coronavirus variant found in Britain.

Italy’s vaccine rollout was slowed by delays in deliveries by manufacturers and other logistic problems. Many people 80 or older say they haven’t been able to reserve a slot for a first dose of vaccine. Doctors lament older adults account for the biggest share of deaths and filled ICU beds.

There’s been than 3.4 million confirmed coronavirus infections in the country. Italy’s total known death toll is 105,879, the second highest in Europe after Britain, which has more than 126,000 deaths.

GAZA CITY, Gaza Strip — Hamas authorities are reinstating restrictions in the Gaza Strip after a rise in daily coronavirus infections.

The Interior Ministry of the Islamic militant group announced Tuesday a nighttime curfew starting at 9 p.m. on Saturday in the Palestinian territory. Mourning houses and street wedding parties will be banned.

The Health Ministry reported 450 confirmed cases of coronavirus on Tuesday, weeks after the number had stood at less than 200. In January, Hamas had started a gradual easing of restrictions and lifted all limits this month.

The pandemic has killed 589 people and close to 60,000 residents have contracted the virus.

Gaza has received vaccines enough to inoculate only 41,000 of the nearly 2 million residents.

MOSCOW — Russian President Vladimir Putin “doesn’t like” the idea of getting vaccinated against COVID-19 on camera and will get his shot out of the public eye on Tuesday, his spokesman says.

Asked whether the Kremlin will release any photos or footage of Putin getting his coronavirus vaccine shot, the spokesman said during a conference call that reporters would have to “take (our) word for it.”

Russia, where only 4.3% of the 146-million population have received at least one shot, lags behind a number of countries in terms of the vaccination rate. A poll by the independent pollster Levada Center found 62% Russians were not willing to take the Russian Sputnik V vaccine.

Russian authorities have given regulatory approval to three domestically developed shots — Sputnik V, EpiVacCorona and CoviVac. The Kremlin spokesman refused to reveal which of the three vaccines authorized for use in Russia Putin will receive, saying all three are “absolutely good, reliable, effective.”

NEW YORK — About 80,000 New York City municipal employees who have been working remotely during the coronavirus pandemic will return to their offices starting May 3.

Mayor Bill de Blasio announced Tuesday that the city will employ strict safety measures, but added “we need our city workers back in their offices where they can do the most to help their fellow New Yorkers, and it’s also going to send a powerful message about this city moving forward.”

A spokesperson for de Blasio said about 80,000 municipal office workers will begin a staggered process of returning to their work sites on May 3.

Asked if the return of city workers to offices could set an example for private businesses, de Blasio said each company will approach the question of whether employees need to be in their offices full time or part time.

AUSTIN, Texas — Texas is becoming the most populous state to make COVID-19 vaccines available to all adults.

That’s more than a month before President Joe Biden’s goal of making the shots available to anyone who wants one by May 1. The announcement by state health officials Tuesday adds Texas to the rapidly growing list of states that are making the vaccine available to all adults.

Texas has one of the nation’s lowest vaccination rates. Roughly 10% of the state’s population had been fully vaccinated as of Tuesday, and about 22% had received at least one dose, according the U.S. Centers for Disease Control. State officials have blamed the numbers on February’s blackouts from a deadly winter storm

The vaccination expansion for the state’s nearly 30 million residents will begin Monday. For the past two weeks, Texas has been the nation’s largest state with no coronavirus restrictions after Republican Gov. Greg Abbott repealed a mask mandate and lifted limits on restaurant and retail occupancy.

Michal Dworczyk, a government official in charge of the vaccination program, says more than 1 million people registered for vaccination since Monday, including those age 59 and above.

Poland, which bought some 16 million of AstraZeneca vaccines, never suspended the company’s product despite concerns in some other countries about reports of cases of blood clots. Dworczyk says the national vaccination program is “our only chance for ending the pandemic and returning to normal social and economic life.”

Almost 5.1 million doses of Pfizer, Moderna and AstraZeneca vaccines, including almost 1.8 million second doses, have been administered in the nation of 38 million.

More than 24,000 beds are filled among 35,000 beds available in Poland to COVID-19 patients. There have been 2.1 million reported cases and nearly 50,000 confirmed deaths in Poland.

MADRID — Spain is lifting a three-month restriction on flights from the United Kingdom, amid criticism of the government’s pandemic travel policies ahead of the traditional Easter vacation period.

Government spokeswoman María Jesús Montero said after a Cabinet meeting Tuesday that people from the U.K. will be allowed to fly to Spain if they have tested negative for the coronavirus within 72 hours of arrival.

Since December, only Spaniards have been allowed back into Spain from the U.K. Spanish authorities were concerned about the spread of a more contagious coronavirus variant first detected in Britain.

Opposition parties in the Spanish parliament chided the government for allowing foreign tourists into Spain while banning travel between Spanish regions due to the risk of contagion.

The British government is discouraging vacations abroad until at least mid-May.