Two of Palestinian Authority President Mahmoud Abbas’s top advisers on negotiations with Israel urged in an editorial that Palestinians abandon their campaign for an independent state and instead aim for a “soft” sovereignty that would see Jordan and Egypt take over responsibility for border security affairs.

Writing in the latest edition of Foreign Affairs magazine, Hussein Agha and Ahmad Samih Khalidi said that the normalization deals between Arab states and Israel require that Palestinians rethink their approach to obtaining peace and statehood.

“The prospects of securing ‘hard’ sovereignty, based on nineteenth-century notions of the nation-state, with full and complete control over land, borders, and resources, are remote,” they wrote.

Palestinians may have to choose between the “self-defeating chimera of hard sovereignty” or “adopting softer versions,” they said.

They argued that the pan-Arab confrontation with Israel was coming to a close with the agreements that had recently been signed between some countries and the Jewish state. In the meantime, the Palestinians, they warned, are being left behind.

“It is plain that the Palestinians need a new approach—one founded on a reconsidered strategic vision and recalibrated aspiration,” Agha and Khalidi wrote. “It must redefine the Palestinian notion of sovereignty, review Palestinian views of security, and refrain from shirking responsibility or indulging in threats that are not credible.”

Jordan, through its history and geographical location, is inextricably tied to the West Bank, and Egypt, in a similar way, is tied to the Gaza Strip, they wrote.

“New Egyptian and Jordanian roles can be effective supplements at a time when the Palestinians on their own have been unable to secure their land from further Israeli encroachment,” they said, calling for both those countries to be directly involved in any future peace talks between Israel and the Palestinians. 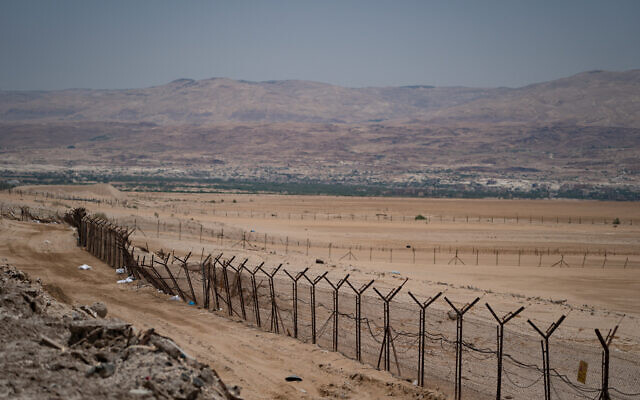 View of the border between Israel and Jordan, in the Jordan valley, in the West Bank on June 17, 2020. (Yaniv Nadav/Flash90)

Both living in London, Agha and Khalidi have long been involved in negotiations between Israel and the Palestinians.

In their Foreign Affairs op-ed they cited Israel’s recent normalization agreements with the United Arab Emirates, Bahrain, Sudan and Morocco and wrote that Saudi Arabia has also taken “unprecedented steps in that direction.”

Oman may also be set to normalize, while other Arab governments “maintain important, albeit discreet, ties with Israel.”

“Further moves toward normalization appear to be only a matter of time,” they predicted, accusing the Arab governments that have already taken the step of acting out of self-interest.

Normalization has undermined what was once a common Arab position, laid down in the 2002 Arab Peace Initiative based on land for peace, that ties to Israel would only be established after full withdrawal to pre-1967 lines. Israel, they said, now has little incentive for peace with the Palestinians.

“Bereft of effective Arab strategic depth—that is, the willingness of Arab states to lend their backing to the Palestinian cause—the Palestinians must now think hard about how to reorder their struggle, how to address what has brought them to this point, and how to change it,” they said.

They noted that initial Palestinian anger at the normalizations has faded and that the Palestinians themselves have weakened their ability to object by insisting on a national right to “independence of will.” Such a policy allows other nations to “claim the right to answer to their own sovereign will and forge their own path.”

“In short, Palestinian diplomacy has failed massively,” they wrote. “It takes exceptional talent to transform an almost complete consensus among Arabs and Muslims on the future of Palestine and Jerusalem into just another matter on a packed Arab agenda.”

But despite their skepticism of the normalization between Israel and Arab countries, the two speculated that future deals might offer opportunities for the Palestinians, including conditioning Saudi relations with Israel “on Israel’s ending its de facto annexation of the West Bank through its settlement expansions.”

That view diverged from the one offered Monday in an op-ed in the Palestinian Al-Quds daily by a former top Saudi adviser who stressed that the kingdom would only normalize ties with Israel after the establishment of a fully independent Palestinian state. 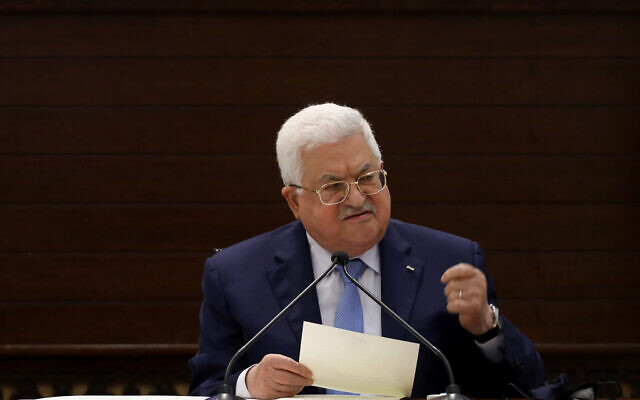 Palestinian Authority President Mahmoud Abbas speaks during a meeting of the Palestinian leadership in the West Bank city of Ramallah, September 3, 2020. (Flash90)

Yet they also reserved criticism for the PA, which “has hardly offered a seductive model of good government, better life, or greater freedom.”

However, they praised Abbas as having greatly reduced the notion of “armed struggle” among broader Palestinian society.

Peace talks between Israel and the Palestinians have been frozen since 2014.