BEIRUT — Airstrikes in northwest Syria near the Turkish border that killed a person and set afire trucks used to distribute aid targeted areas considered the safest in the rebel-held region, a top UN official said Monday.

The strikes on several locations a day earlier angered Turkey, prompting it to place its troops on high alert. Turkey’s Defense Ministry said it asked Russia to secure an immediate halt to the attacks.

Mark Cutts, UN deputy regional humanitarian coordinator for the Syria crisis, called the attacks “extremely worrying” because they endangered the lives of the area’s most vulnerable population.

The US condemned the attacks and called for a nationwide ceasefire. In a statement Monday, it said the strikes near the Bab al-Hawa border crossing with Turkey had put access to much needed assistance at risk.

The area along the border with Turkey in rebel-held northwestern Syria had been considered one of the safest spots in the conflict-stricken region, and had attracted aid groups who located their offices and warehouses there.

The rebel-held enclave divided between Idlib and Aleppo provinces is home to more than 2.7 million displaced people, mostly living in camps and temporary shelters, many having escaped repeated rounds of military offensives and fighting.

“Many of the camps are in that area, about a million people in camps around that area. They are highly vulnerable when airstrikes and shelling happen,” Cutts told The Associated Press. “It is also the area where many of the humanitarian organizations have offices and warehouses. They put their warehouses and offices there thinking that was the safest part of Idlib. So when that starts coming under attack that is extremely worrying.” 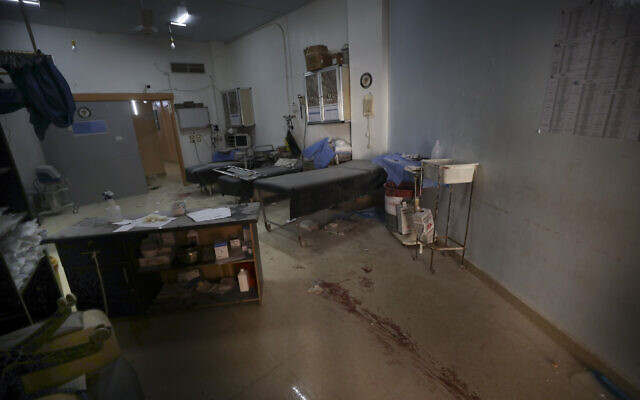 Opposition activists claimed that Russian warplanes carried out the attacks near the Bab al-Hawa border crossing with Turkey late Sunday, hours after government artillery shells hit a major hospital in Atareb, another rebel-controlled town. Six patients, including a 10-year-old child, were killed. Medical staff were wounded, forcing the facility to shut its doors.

The Bab al-Hawa border crossing is the main point from which international aid is brought to rebel-held parts of northwest Syria. 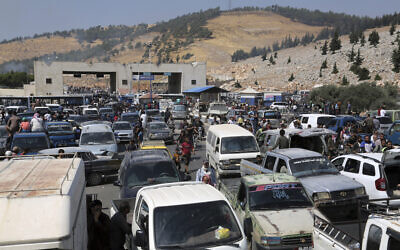 Cars and trucks line up to enter Turkey as hundreds of protesters gather during a demonstration at the Bab al-Hawa border crossing with Turkey, Syria, August 30, 2019. (AP Photo)

The crossing “remains the only UN-authorized humanitarian border crossing in Syria and remains the most efficient and effective way to provide life-saving humanitarian assistance” every month to residents of the area, US State Department spokesman Ned Price said.

Cutts called the attack on the hospital “really horrific,” adding that the same facility came under attack years before, forcing it to go underground to continue to operate.

Idlib-based journalist Salwa Abdul-Rahman said one of the strikes hit an area near the town of Sarmada, setting afire trucks used by aid workers to distribute assistance.

“The targeted locations were civilian with no military presence,” she said.

One person was killed in the strikes, according to the Britain-based Syrian Observatory for Human Rights, an opposition war monitor, and the opposition’s Syrian Civil Defense, also known as White Helmets.

An AP video from the area showed about a dozen trucks on fire as civil defense members sprayed them with water.

Cutts said the year-old ceasefire has held in some parts, but not everywhere, saying that shelling in some areas has happened every day.