Standing in a mostly empty voting center in a school in the northern Arab city of Tamra, Othman said he had a bad feeling about Tuesday’s Knesset elections, at least as far as Arab parties were concerned.

“I’m normally optimistic, but I don’t really see reason to expect the best. People are exhausted,” said the Hadash party member, who did not give his last name.

Reports of low Arab turnout had been coming in from across the country, although no reliable, official figures had yet emerged. General voter turnout was down, with only 51.5 of eligible voters casting a ballot by 6 p.m., the lowest rate in more than a decade.

But voting was said to be particularly low in Arab communities, with the predominantly-Arab Joint List party estimating a final turnout of some 55% by the end of the day. It stood at around 32% by 4 p.m., the Joint List said. Final Arab turnout in the March 2020 election stood at some 65%, a two-decade high. 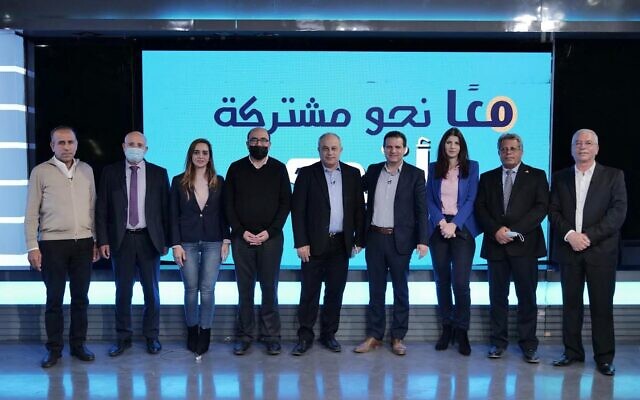 Ma’an party leader Ahmad Darawsheh stands in the middle of a group of Joint List politicians in front of a slogan declaring the parties’ unity (Courtesy: Ma’an)

While the Arab parties have run together in a four-party bloc known as the Joint List in most elections since 2015, the coalition broke apart in early February.

The conservative, Islamist Ra’am left the bloc after its leadership took positions that the other parties saw as crossing red lines — including contemplating an alliance with Prime Minister Benjamin Netanyahu and his Likud party.

“They’ve tried this method [of collaborating with the right] before. This isn’t a new idea, and it doesn’t work. I want to tell everyone who hasn’t yet voted — these are false promises,” said Tamra resident Yazan Abu al-Heija, 29, a Hadash activist working at the polls. 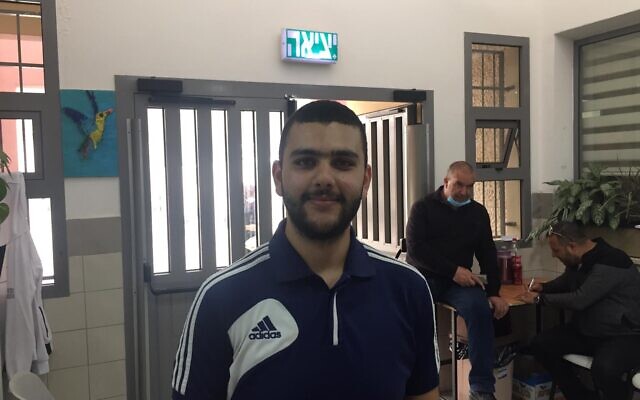 Tamra resident Yazan Abu al-Heija at a polling station in a local school on March 23, 2021 (Aaron Boxerman/Times of Israel)

If the drop in the Arab vote continues, the outlook for the Arab parties could be bleak: The Joint List’s seats might drop from 15 to 8 or 7, while Ra’am might not make it past the 3.25% vote threshold required to enter parliament.

Badran Abu al-Heija, Yazan’s father, told The Times of Israel that he hoped that the Islamists make it into the Knesset despite everything.

“For them not to pass would throw away many Arab votes. If they make it into the Knesset, they might yet return to the Joint List,” Abu al-Heija said.

Ruba Tahaa, a 16-year-old Tamra resident manning the polls, said she was surprised by how few people had headed out to vote.

“Honestly, it’s less than I expected. People have shown up, but there ought to have been many more,” Tahaa said.

Some had speculated that the clash between Ra’am and the Joint List would prompt each side to bring out one another’s base in an attempt to defeat the other. Instead, the opposite seemed to have occurred: The relentless infighting between the two sides appeared to have driven Arab voters away. 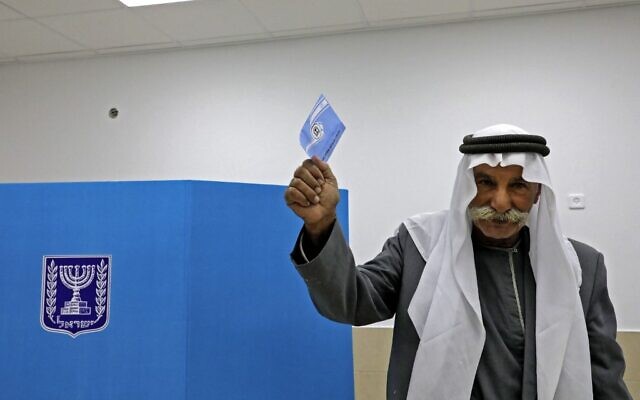 An Israeli Bedouin casts his ballot on March 23, 2021 in the Bedouin town of Rahat on the fourth national election in two years. (HAZEM BADER / AFP)

The opposing Arab factions have been at each others’ throats ever since the split became official in February. The two sides were unable to even agree to sign a surplus vote agreement — which transfers any excess votes for one slate that could add up to an additional seat for the other to that party — with the attempt collapsing into recriminations.

“When everything is so verbally violent, and everyone is attacking and calling each other traitors and demonizing one another, the first to benefit are the Zionist parties, even as the voter level goes down,” prominent Arab pollster Yousef Makladeh said earlier this week.

While the pace in Tamra began to pick up slightly as the evening went on, with cars beginning to cluster in the tight alleyways close to the school, it was unclear whether the later turnout would be enough to overcome the slow early hours.

“People seem to be feeling apathetic towards the vote,” Abu al-Heija said.