China is set to take a more active role in encouraging negotiations between Israel and the Palestinians, offering to host officials from both sides for a summit, Chinese Foreign Minister Wang Yi told the Saudi news network al-Arabiya Wednesday.

Wang said that China will advance a five-point plan to realize “regional peace and stability in the Middle East.”

As part of the initiative, Wang also told al-Arabiya that China plans to invite Israeli and Palestinian “notables” to meet for talks in Beijing.

China has hosted Israeli-Palestinian delegations in the past, with a 2017 trilateral meeting including both senior Palestinian Authority officials and then-Israeli deputy Knesset speaker Hilik Bar.

Beijing proposed a four-point Israeli-Palestinian peace plan in 2013, which included the establishment of a Palestinian state alongside Israel. 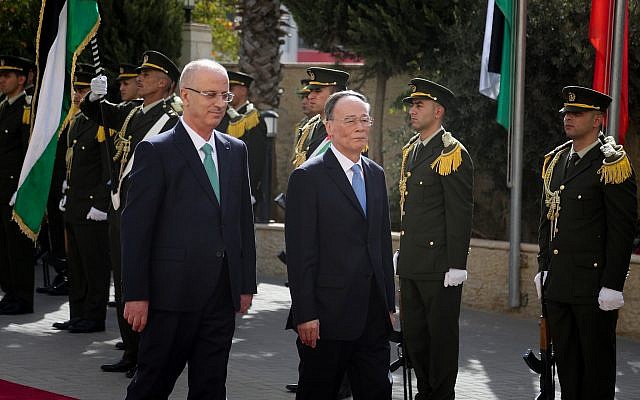 In 2018, during a four-day state visit to Israel, China’s vice president Wang Qishan visited the West Bank city of Ramallah to meet with Palestinian Authority prime minister Rami Hamdallah, who called for greater Chinese involvement in the Israeli-Palestinian peace process.

Hamdallah told Wang that Israel and the United States had greatly undermined peace talks and the two-state solution, pointing to settlement construction in the West Bank and moves by the Trump administration such as the recognition of Jerusalem as Israel’s capital.

Noting that China is a permanent member of the United Nations Security Council, Hamdallah told Wang that Beijing should take an active role in the peace process and back PA President Mahmoud Abbas’s call for an international conference on the issue. He also said China should pressure Israel over alleged violations of international law.

Though a member of the Security Council, China has historically had a minor role in peace talks, which have been largely led by the US. It is not a member of the Middle East Quartet, which includes countries and international organizations involved in mediating the Israeli-Palestinian peace process.