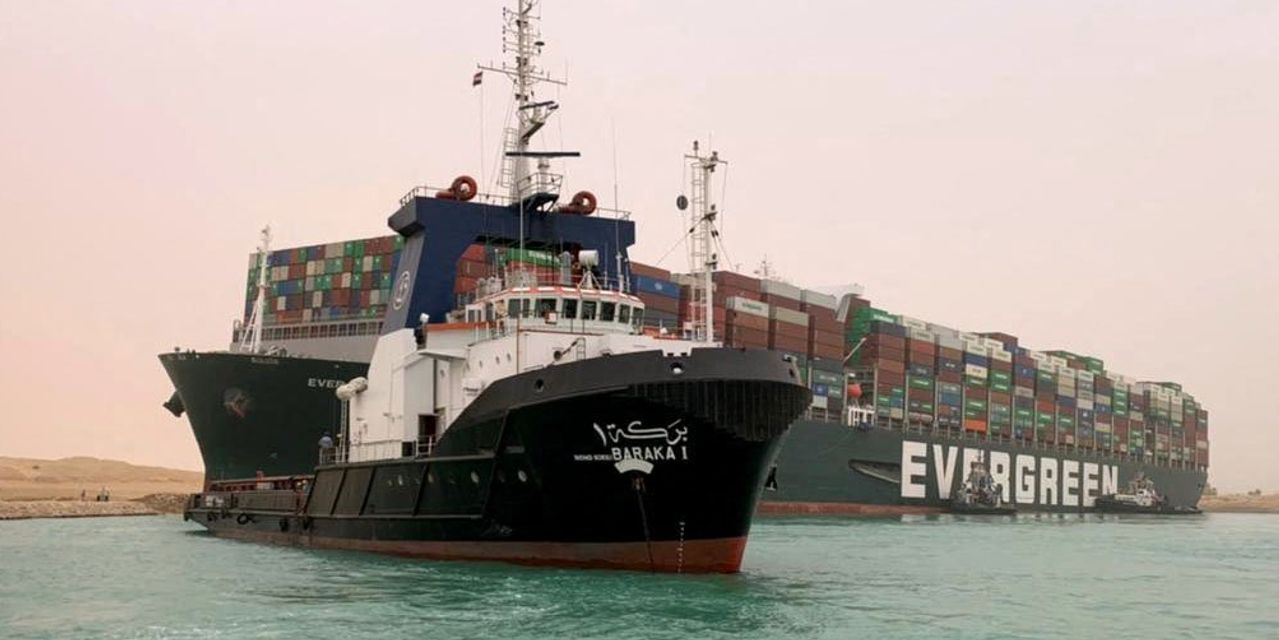 A giant boxship ran aground in the Suez Canal on Tuesday, blocking all vessel traffic and creating a backlog of ships on one of the world’s busiest trade routes.

The Ever Given, a 400-meter (1,312 foot) container ship, was stuck in the canal sideways, with its bow wedged in one bank and its stern nearly touching the other, according to ship operators and images posted on social media.

The ship, operated by Taiwan-based Evergreen Group, is one of the biggest ocean vessels. It can move more than 20,000 containers and is taller than the Empire State Building if turned upright.

“There are at least 100 ships waiting to transit between the Red Sea and the Mediterranean,” said a London broker. “Tug boats are trying to refloat it, but it’s not going to be easy.”

The Suez Canal Authority, which operates the canal, wasn’t immediately available for comment. An Evergreen spokesperson said the ship was probably hit by strong winds “causing the hull to deviate from the channel and run aground.”

Suez Canal maritime services provider Leth Agencies said in a note to clients that some 42 vessels traveling northbound through the canal are idle along with 64 vessels sailing southbound.

The Suez Canal is a vital trade route for tankers carrying oil and natural gas along with container ships moving manufactured goods like clothing, electronics and heavy machinery from Asia to Europe and the other way around. Around 19,000 vessels crossed the Suez in 2020, according to the Suez Canal Authority.

The Ever Given is owned by Japan’s Shoei Kisen and operated on a long-term charter by Evergreen. It was sailing to Rotterdam from China, according to shipping data.

Parts of the 120-mile long Suez Canal are a single lane stretch waterway measuring up to 300 feet wide. Ships transit in northbound and southbound convoys. Any ship getting stuck can stop others from completing the transit.

Gulf Agency Co., another service provider in the canal, said the Ever Given was sailing northbound as part of a convoy when it got stuck around 7 a.m. local time on Tuesday. More than a dozen ships behind her moved to anchorages waiting for the waterway to be cleared, Gulf Agency said in a notice to clients.

“There are ships ahead and behind us as far as you can see,” said Manolis Kritikos, a mechanic at a Greek operated tanker.

—Joanne Chiu contributed to this article.

Write to Costas Paris at costas.paris@wsj.com