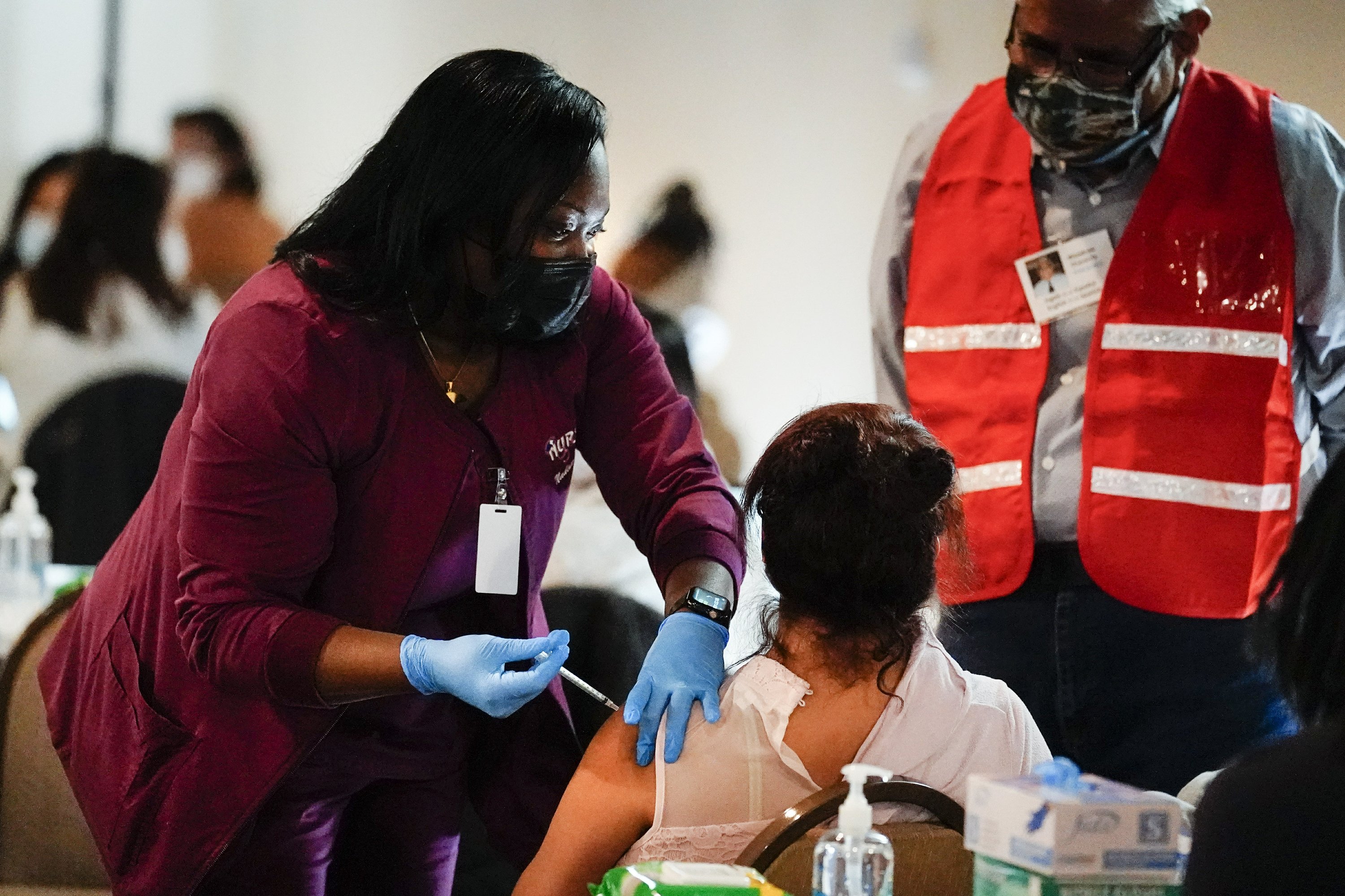 NEW YORK — More than three months into the U.S. vaccination drive, 70% of Americans 65 and older have received at least one dose of the vaccine.

Also, COVID-19 deaths have dipped below 1,000 a day on average for the first time since November. Dozens of states have thrown open vaccinations to all adults or are planning to do so in a matter of weeks.

More than 43% of Americans 65 and older — the most vulnerable age group, accounting for an outsize share of the nation’s more than 540,000 confirmed coronavirus deaths — have been fully vaccinated, according to the CDC. The number of older adults showing up in emergency rooms with COVID-19 is down significantly. Vaccinations overall have ramped up to 2.5 million to 3 million shots per day.

The outlook in the U.S. stands in stark contrast to the deteriorating situation in places like Brazil and Europe. At the same time, public health experts such as Dr. Anthony Fauci in the U.S. are warning it’s too early to declare victory and relaxing social distancing and other measures could easily lead to another surge.

CASES: The seven-day rolling average for daily new cases in the U.S. decreased over the past two weeks from 56,045 on March 9 to 53,308 on Wednesday, according to Johns Hopkins University.

DEATHS: The seven-day rolling average for daily new deaths in the U.S. decreased over the past two weeks decreased from 1,557 on March 9 to 940 on Wednesday, according to Johns Hopkins University.

— Dr. Fauci: Positive signs with vaccinations, but U.S. not turning corner yet on coronavirus

MADRID — Spain’s top health official has warned the country is at risk of another spike in coronavirus infections that has already struck many parts of Europe.

“We are facing a decisive moment,” Health Minister Carolina Darias said after meeting with Spain’s regional health chiefs on Wednesday. “We must invert this tendency. We have to intensify our efforts.”

Darias says the spread of the more contagious variants is pushing up infections across Spain. A nightly curfew and other restrictions on movement had put a cap on infections until two weeks ago, when the figures started to increase.

Darias made her appeal alongside Interior Minister Fernando Grande-Marlaska, who said police will be extra vigilant to enforce bans on travel between regions and unauthorized social gatherings for next week’s Easter holidays.

“Our goal is to save lives,” says Grande-Marlaska. Also Wednesday, thousands of Spaniards lined up to get AstraZeneca shots again, the latest country to restart the vaccine after its credibility suffered a series of recent setbacks.

Spain reported more than 7,000 infections in the past 24 hours and 320 deaths, increasing the confirmed death toll to more than 74,000.

ANKARA, Turkey — Turkey has received approximately 1.4 million doses of the Pfizer vaccine and will begin administering shots next week.

Turkey’s health minister Fahrettin Koca announced on Twitter that Turkey received delivery of some 750,000 doses of the Pfizer vaccine on Tuesday and 700,000 more arrived on Wednesday. Turkey is set to receive a total of 4.5 million doses of the vaccine.

Turkey rolled out its vaccination program in January after authorities approved the emergency use of the vaccine developed by China’s Sinovac company. More than 14 million shots have been administered so far. Some 6 million people have received their two doses.

The country of 83 million aims to provide vaccines to 50 million people by the fall.

WASHINGTON — Dr. Anthony Fauci isn’t ready to say the nation has turned the corner on the coronavirus pandemic, despite about 2.5 million Americans getting vaccinated each day.

The government’s top infectious disease expert says he often gets asked that question. His response: “We are at the corner. Whether we or not we are going to be turning the corner remains to be seen.”

At the White House coronavirus briefing on Wednesday, Fauci says the main challenge remains a stubbornly high level of new daily cases in the country. It’s hovering around an average of 55,000 and up slightly in recent days. While that is clearly much better than the 250,000 daily cases at the peak of the winter wave, it’s uncomfortably close to levels seen during the COVID wave of last summer.

“When you are at that level, I don’t think you can declare victory and say you have turned the corner,” Fauci adds.

On the plus side, along with the growing level of vaccinations, Fauci is underscoring recent studies that show negligible rates of coronavirus infection among fully vaccinated people. There’s also been a significant drop in the number of people 65 and older going to the emergency room with COVID-19. That’s the age group most vulnerable to the disease.

BRUSSELS — Belgium is reintroducing strict lockdown measures in response to a surge of new coronavirus infections.

The government announced schools would be closed on Monday and residents would have limited access to non-essential businesses starting Wednesday night.

Under the new rules, non-essential shops can remain open but customers will need to book appointments. Hairdressers and beauty parlors must close until April 25.

PARIS — France’s culture minister has been hospitalized for COVID-19, the latest senior official to be infected as the nation faces a third surge of infections.

Roselyne Bachelot announced last weekend that she had tested positive and her hospitalization was made public Wednesday. The latest surge has been likely propelled by the highly contagious virus variant first seen in Britain.

ICUs in the Paris region as well as in northern and southeastern France are filling up.

French President Emmanuel Macron, who was infected months ago but never hospitalized, on Tuesday announced an acceleration of the country’s vaccination campaign. Now all people over 70 are eligible to get a vaccine shot.

The country’s Health Ministry says that’s up from the previous high of 333 on Tuesday. Ukraine began vaccinations in late February after receiving 500,000 doses of the AstraZeneca vaccine.

Reluctance to take the shots is strong even as new infections severely tax the country’s underfunded medical system. There have been 30,773 confirmed deaths in Ukraine during the pandemic.

BRUSSELS — The European Union is moving toward stricter export controls to ensure there are more COVID-19 vaccine supplies for the bloc.

European Commission President Ursula von der Leyen said on the eve of a summit of the 27 leaders that it has a plan ready to guarantee more vaccines produced in the bloc are available for its own citizens before they can be shipped for exports.

EU nations have been specifically stung by the United Kingdom, which has received some 10 million doses from EU plants while they say nothing came back from Britain. Prime Minister Boris Johnson has spoken in the past few days to European leaders, including von der Leyen and French President Emmanuel Macron.

“Vaccines are an international operation,” Johnson says, adding that the U.K. would “continue to work with European partners to deliver the vaccine rollout.”

The EU has been insisting that two AstraZeneca plants in Britain should also be part of the EU deliveries.

BERLIN — Chancellor Angela Merkel has dropped plans for a five-day shutdown in Germany over Easter, which had prompted confusion and criticism.

She called the idea a mistake and apologized to Germans. Merkel announced the decision after calling a hastily arranged videoconference with Germany’s 16 state governors, who are responsible for imposing and lifting restrictions.

The same group had come up with the unexpected plan for deeper restrictions over Easter, which was announced early Tuesday. The plan was to make Thursday, the day before Good Friday, a “rest day,” with all shops closed, and only allow supermarkets to open on Easter Saturday.

Draghi told the Senate not all the nation’s regions are following the Health Ministry’s directives that give priority to older age groups. Said Draghi: “Some (regions) are neglecting their elderly in favor of groups that proclaim priority” based on their lobbying ability.

Draghi expressed satisfaction of vaccination in nursing homes, telling lawmakers that 86% of care home residents have received at least one vaccine dose. He also says Italy will aim to reopen all primary and nursery schools nationwide, possibly after Easter, even in regions with the strictest COVID-19 restrictions

Faisal Sultan, a special assistant to the prime minister, says on Twitter an order has been placed for the purchase of Chinese-made vaccines which will be delivered to Pakistan within days.

Also Wednesday, Education Minister Shafqat Mahmood saiys the government is ordering the closure of schools in the capital, Islamabad and in several high-risk cities until April 11.

WARSAW, Poland — Poland has recorded a record daily high of nearly 30,000 new coronavirus cases amid a huge surge in infections that is overwhelming hospitals.

Prime Minister Mateusz Morawiecki says the dire situation will lead to greater restrictions over the Easter holiday, with full details to be announced later this week.

ZAGREB, Croatia — Croatia’s prime minister has been vaccinated with an AstraZeneca coronavirus shot in an apparent effort to boost public confidence in the vaccine.

“I hope that with this message we have influenced others to follow our example and get vaccinated so we can defeat this pandemic and return to the normal life,” Beros said.

Croatia did not suspend administering AstraZeneca shots unlike some other European Union states over reports linking the vaccine with isolated cases of blood clots.

There have been reports in Croatia of people not showing up for their vaccination with AstraZeneca shots because of fears over its effectiveness. Like many other EU members, Croatia has been suffering with the lack of vaccines.

Sorgente articolo:
The Latest: Dr. Fauci: Not turning corner yet on coronavirus – The Associated Press