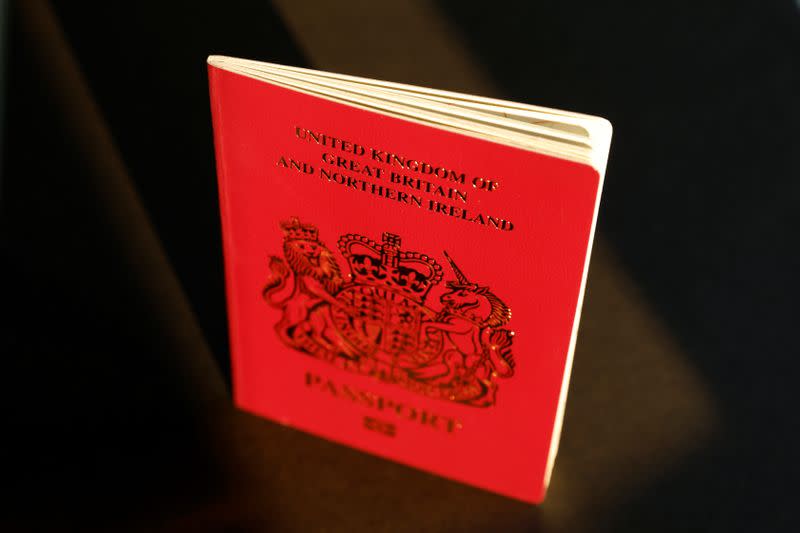 HONG KONG (Reuters) – The Hong Kong government on Thursday confirmed a Reuters report that it had told 14 countries to stop accepting a British travel document that many of its young people use to apply for working holiday visas in Europe, North America and parts of Asia.

In a move seen by some envoys as a diplomatic affront, the government informed the foreign consulates in a letter that it no longer considered the British National Overseas (BNO) passport a valid travel document as of Jan. 31.

The letter, seen by Reuters and confirmed by the Hong Kong government after the story was published, demanded that its Hong Kong passport should be used instead.

A diplomatic row broke out over the BNO in January after Britain introduced a new visa scheme offering a pathway to full citizenship for Hongkongers who want to leave the Chinese-ruled territory.

“The Hong Kong government has no authority to dictate which passports foreign governments recognise as valid,” a spokeswoman for the British Foreign Office said when asked about the Reuters report.

Almost 3 million Hong Kong residents hold or are eligible for the BNO document that was created ahead of Britain handing the city back to Chinese rule in 1997.

Hong Kong has also started to mirror mainland China by not recognising dual nationality, preventing for the first time foreign diplomats from visiting locals with foreign passports in detention.

“Most countries are going to ignore this,” said one senior Western diplomat who had seen the letter.

“It is the Hong Kong government just trying it on … They have no right to tell any state what foreign passports it can recognise.”

Another envoy described the move as “bordering on belligerent” and said it was not the way the Hong Kong government, generally mindful of the city’s standing as an international financial hub, has traditionally behaved.

In a statement to Reuters, the Hong Kong government said: “Hong Kong participants under the Working Holiday Scheme should be confined to holders of the HKSAR passport,” referring to the document of the Hong Kong special administrative region.

“The government of the HKSAR has formally notified the 14 partner countries which had signed working holiday agreements with Hong Kong.”

A Hong Kong government website lists Japan, Canada, Germany, Britain, Sweden, Ireland and Australia among the countries under the scheme.

Officials in Japan, South Korea, Italy, Sweden and New Zealand confirmed to Reuters that they still recognised the BNO passport for visas. South Korea’s Foreign Ministry added that it had not received the letter, while Hungary said it had and had started talks to change the working holiday programme.

Other nations, including the United States, Finland and Norway, also offer similar arrangements or student exchanges for Hongkongers, and have accepted BNOs from applicants.

It is not known if the United States also received the letter but a State Department spokesman told Reuters the BNO remained valid for visa-issuing purposes and for travel to the United States.

Hong Kong’s moves against the BNO followed an announcement from the UK government that its new visa could attract more than 300,000 people and their dependents.

London said it was fulfilling a historic and moral commitment to Hong Kong’s people in the wake of the national security law, which allows for suspects in serious cases to be taken across the border and tried in mainland Chinese courts.

Beijing and Hong Kong authorities say the legislation is necessary to bring stability to the city after anti-government protests flared in 2019.

The UK scheme allows those with BNO status to live, study and work in Britain for five years and eventually apply for citizenship.

Beijing said it would make them second-class citizens, a line propagated by pro-Beijing media commentators in Hong Kong.

Britain handed its former colony back to Chinese rule in 1997 with guarantees its core freedoms, extensive autonomy and capitalist way of life would be protected.