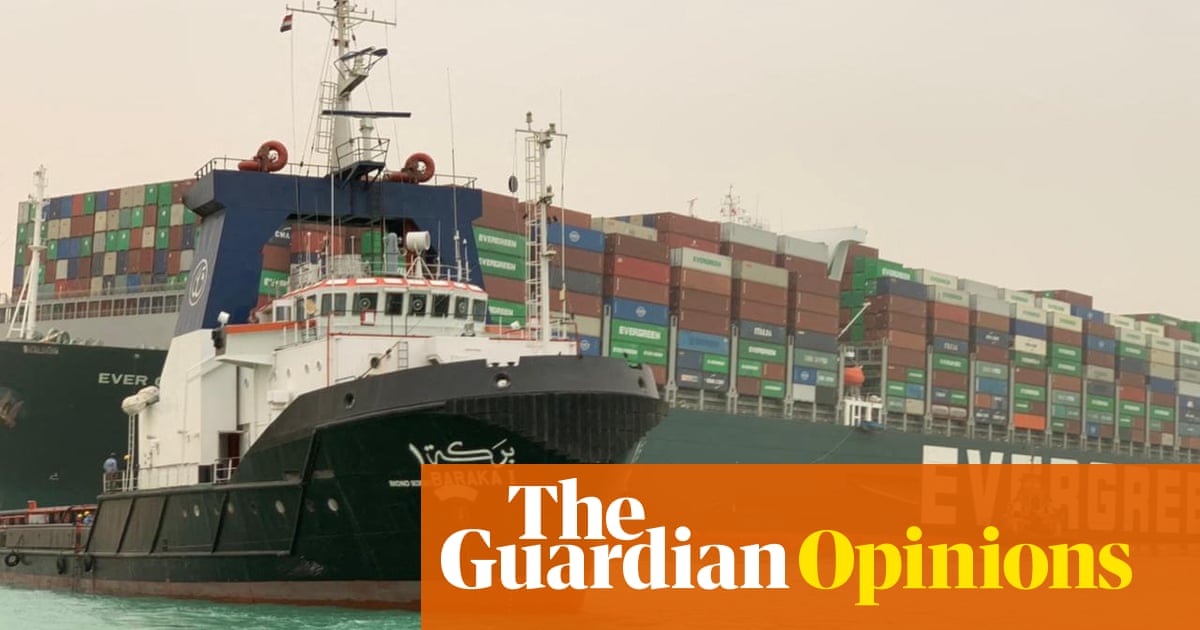 However grim and difficult life these days is, I’d still prefer to be sitting on dry land in lockdown than trying to do a three-point turn on the Suez canal with a 400-metre cargo ship under my control. Wouldn’t you? The grounding of the Ever Given container vessel in the Suez canal has provoked both hilarity and genuine concern. Vessels have got stuck before in the canal: at its narrowest, the “ditch in the desert”, as crew on the container vessel I travelled with in 2010 told me, is only 300 metres wide. It’s tight. That’s why ships must wait at either end to be sent through in a slow convoy. But the Ever Given is longer than the canal is wide, and it is stuck sideways. A simple shunt off the banks will not work.

The blockage is costly in all sorts of ways, as well as embarrassing for the Taiwan-based Evergreen Marine, the company that operates the ship. The Suez canal was opened in 1869, after the French engineer Ferdinand de Lesseps employed forced labour to improve rudimentary pre-existing canals (that had been in existence probably since the time of Pharaoh Senusret III) and created an essential thoroughfare for marine traffic, expending many lives in the process and taking 10 years.

Transiting the canal saves ships more than a week and many fuel costs compared with the longer route via the Cape of Good Hope. The canal is a huge money-spinner for the Egyptian government, earning it several billion dollars a year. When I went through on Maersk Kendal in 2010, as research for a book I wrote about the shipping industry, the transit cost $300,000. That fee included 14 hours of sedate trundling down what is actually rather a dull canal, once you’ve had an hour or so of excitement at seeing sand and palm trees, and realise you’ve got 13 more hours of them to go. It also included an obligatory “Suez crew”, who joined for the transit and had their own cabin, and a pilot who took control of the ship. This is standard procedure in modern shipping: ships often take on pilots in harbour areas or tricky passages because they have better local knowledge. Technically the pilot took command of the bridge, though the pilot we had was too busy eating his way through the entire menu, and dozing, to be particularly commanding. The second officer had to keep waking him up for instructions.

Although the official reason given so far for the Ever Given’s plight is that it was blown sideways by wind, I do wonder. In the vast majority of maritime accidents, human error is at fault. And no wonder: seafarers, working in ever smaller crews on ever larger ships, are knackered. Most on my journey were old enough to remember when they could stop for lunch in port. Now, ships are rarely in port for more than several hours, and those are busy. As we entered the canal, transiting south with our mostly empty boxes to collect made-in-China consumables and essentials such as medicine, the second officer was operating on three nights of three hours’ sleep, and would have no sleep during the transit. There is, as the Ever Given demonstrates, much to look out for during the passage.

I think of those tired workers often, when I read about crew who have been stuck on their ships for the entire pandemic, forbidden from setting foot ashore, unable to go home. Even 10 years ago, the Filipino crew I sailed with called their job “dollar for homesickness”. So among the jokes and references to beached whales, I think of the crews on the 150 ships stuck behind and ahead of the Ever Given.

Over the years, ships have been getting bigger and bigger, the better to bring us 90% percent of world trade – even if most people probably think that their breakfast cereal and electronics and clothes and fish arrive by air. In fact, modern shipping is so efficient, it’s cheaper to send Scottish fish to be filleted in China and back again than it would be to do the filleting at home. But that efficiency comes at a price: of ships reliant on this one waterway to get to the bounties of Asia, and of crews who spend months away from home, missing the births and birthdays of their children, to bring us what we need, and what we think we need.

Sorgente articolo:
I’ve sailed the Suez canal on a cargo ship – it’s no wonder the Ever Given got stuck – The Guardian