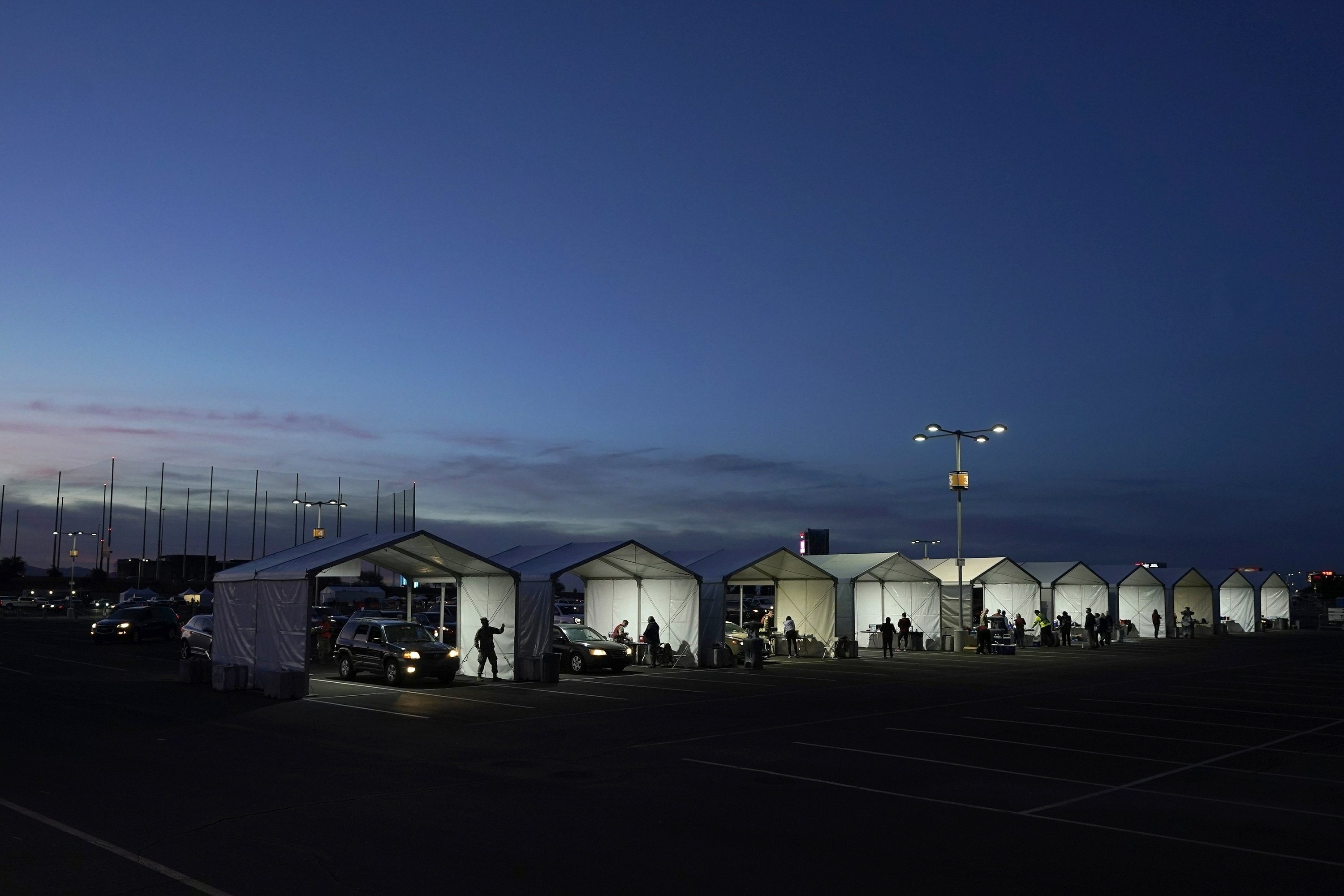 PHOENIX — Health officials in Arizona announced an outdoor state-run COVID-19 mass vaccination site in the Phoenix suburb of Chandler will be replaced April 5 by a drive-thru operation inside a large business warehouse in Mesa in advance of approaching hot weather.

The department said the 24-hour site at State Farm Stadium in Glendale will convert to overnight operations only and additional indoor sites are being sought in preparation for summer heat.

Department officials say people who received first doses at the Chandler-Gilbert facility on or after March 14 have been scheduled for their second doses at the Dexcom site, which will operate 7 a.m. to 5 p.m. seven days a week.

CASES: The seven-day rolling average for daily new cases in the U.S. increased over the past two weeks from 55,516 on March 11 to 58,617 on Thursday, according to Johns Hopkins University.

DEATHS: The seven-day rolling average for daily new deaths in the U.S. decreased over the past two weeks decreased from 1,371 on March 11 to 967 on Wednesday, according to Johns Hopkins University.

— China outlines COVID-origin findings, ahead of WHO report

ATHENS, Greece — Authorities in Greece said students and teachers will have to use self-test kits for COVID-19 in order to attend classes when schools reopen.

Greece is planning to make the test kits freely available on a weekly basis to every resident of the country with a social security number, starting next month. The program is designed to allow for the reopening of schools as well as restaurants and retail businesses which have remained mostly closed since the lockdown was imposed in early November.

Vassilis Kontozamanis, the deputy health minister, said a legislative amendment in parliament would be needed to make testing mandatory for school attendance.

Greece is currently grappling with a surge in coronavirus infections which has seen many hospitals run by the state health system reach capacity. The country’s center-right government says it plans to launch the tourism season in mid-May but has not yet given a date for schools and retail businesses to reopen. School children of all ages are currently attending compulsory online classes.

NICOSIA, Cyprus — Cyprus’ Health Ministry says the spread of the U.K. variant of the coronavirus throughout the east Mediterranean island nation has marked an “alarming” increase, making up 95.5% of all new infections from Feb. 16 through Mar. 6.

The Ministry said statistics show that cases of the U.K. variant have more than doubled from the two-week period covering Feb. 1-Feb. 15.

It said various studies completed within several European countries have indicated that the U.K. variant is 50% more contagious. In Cyprus, it’s also appearing in younger COVID-19 patients which has resulted in more hospitalizations of younger people.

COLUMBIA, S.C. — The governor of South Carolina has opened up COVID-19 vaccination to all of the state’s residents ages 16 and up, saying the state could begin scheduling appointments next week and receive the vaccine starting March 31.

As of this week, more than 1.1 million in South Carolina had gotten at least one vaccine dose, or about 27%, according to public health officials. Nearly 618,000 had been fully vaccinated, or about 15%.

TOPEKA, Kan. — The governor of Kansas has announced that the state is making everyone over the age of 16 eligible to get the coronavirus vaccine starting Monday.

“With the anticipated increase in supply from the federal government, we must get every dose of vaccine into arms quickly,” Democratic Gov. Laura Kelly said in a statement.

She added: “I strongly encourage every Kansan to get the COVID-19 vaccine so we can get back to school, back to work, and back to normal.”

Several other states also have made the vaccine available to all adults, including Alaska, Arizona, Florida, Georgia, Mississippi, Utah, and West Virginia.

As of Friday, 35.1% of the adult population in Kansas had received at least one dose of the vaccine.

SALEM, Ore. — The governor of Oregon has said she will accelerate the state’s vaccine eligibility timeline by two weeks for residents over age 16 with underlying medical conditions, frontline workers and those living in multi-generational homes.

Democratic Gov. Kate Brown said those groups will now be eligible to sign up for the COVID-19 vaccine on April 5. Those over age 45 with underlying conditions become eligible for the vaccine on Monday and are already eligible in 22 counties that have already inoculated most of their older population.

Brown said all residents over the age of 16 will become eligible for vaccination no later than May 1. Brown said the number of counties ahead of schedule on vaccinating their population and increased vaccine supply from the federal government made it possible to speed up the timeline.

GENEVA — The head of the World Health Organization is asking rich countries to donate at least 10 million coronavirus vaccines so the U.N. health agency can reach its goal of vaccination in all countries within the first 100 days of 2021.

Tedros Adhanom Ghebreyesus says supply problems faced by the U.N.-backed effort COVAX, which aims to provide vaccines to all countries, means that about 20 countries are still awaiting their first doses of vaccines from the program.

Tedros says he’s also asking manufacturers to scale up their production so extra vaccines could be donated to poorer countries. He slammed the numerous private deals countries have struck with pharmaceuticals that have meant fewer vaccines for developing countries and warned COVAX would need many more hundreds of millions of vaccines in the coming months.

On Thursday, WHO’s COVAX partner Gavi, announced supply problems meant it would have to delay the delivery of about 90 million vaccines until about May.

However, some parents want to keep their children home, and social distancing guidelines determined by states may mean schools can’t bring all students back at once.

Oregon’s Hillsboro district plans to introduce limited in-person learning for some students this month. Ohio’s Youngstown district doesn’t expect the money to change its numbers before the school year ends. And surveys in Virginia’s Fairfax County indicate many families in the state’s largest district may not want more time in classrooms.

There were 626 COVID-19 patients occupying hospitals on Thursday, down from 628 on Wednesday and only a fraction of the pandemic high of 5,082 on Jan. 11, according to the state’s coronavirus dashboard.

WASHINGTON — Dr. Anthony Fauci says scientists are trying to answer the two most pressing questions for millions of Americans already fully vaccinated against COVID-19: Can they become infected without showing any symptoms, and if so, can they transmit the coronavirus to someone else?

Fauci said at the White House coronavirus briefing Friday that a large trial is under way involving 12,000 college students at more than 20 universities.

“This is a question of extreme importance,” he said. “This will help inform science-based decisions about mask use and about social distancing post-vaccination.”

Half the students will get the two-dose Moderna shot and the other half will initially serve as a control group, while getting the same vaccine four months later.

All the students will keep an electronic diary, swab their noses daily and provide occasional blood samples. They’ll also provide the names of close contacts. Fauci says it may take about five months to get some answers.

BERLIN — Germany has declared all of France, including its overseas territories, as a “high incidence area” for the coronavirus.

The cities are Boston, Norfolk, Virginia, and Newark, New Jersey, according to coronavirus coordinator Jeff Zients. Together, the three sites will be capable of vaccinating 15,000 people daily.

Zients says the U.S. is now vaccinating an average of 2.5 million people a day, a pace that allows the nation to meet the new goal Biden announced Thursday. States are moving up the dates for younger adults to get vaccinated and the federal government is taking steps to increase the number of vaccinators and vaccine sites.

Zients says Johnson & Johnson is on track to meet its target of delivering 20 million doses of its one-shot vaccine by the end of March, with at least 11 million doses expected next week. Meanwhile, daily virus cases and hospitalizations are rising.

“It is clear there is a case for optimism, but there is not a case for relaxation,” Zients says. “This is not the time to let down our guard.”

Health Minister Jens Spahn says if infections continue unchecked, Germany’s health system could be stretched to its limit in April. The head of Germany’s disease control center says the country is just at the “beginning of the third wave” of the pandemic. Germany reported 21,573 new cases on Friday, compared to 17,482 a week earlier.

He says more than 10% of Germans had received at least a first dose of a COVID-19 vaccine in a slow rollout of vaccines in Europe.

LONDON — The European Medicines Agency has approved new manufacturing sites for coronavirus vaccines made by Pfizer, Moderna and AstraZeneca in a move that could significantly boost Europe’s supply of the shots.

In a statement published on Friday, the EU medicines regulator says it had approved sites in the Netherlands, Germany and Switzerland for vaccines made by the companies.

The new approvals come amid the 27-nation bloc’s struggles to ramp up COVID-19 vaccination and repeated delivery delays and manufacturing problems. In addition, the EMA says it was granting “more flexible storage conditions” to the Pfizer vaccine — which was cleared on the basis that it needed ultra-cold freezer temperatures for storage and delivery.