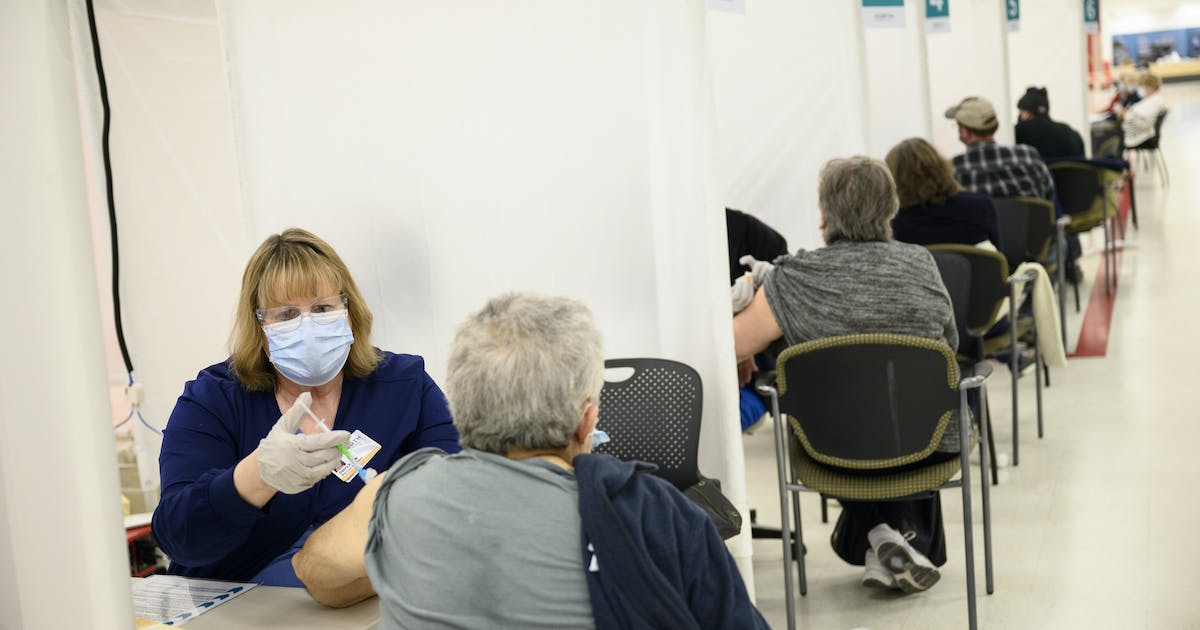 The expansion “doesn’t mean everyone owes you vaccine on Tuesday,” she said, “because that’s not how this works.”

The announcement nonetheless means an aggressive expansion in Minnesota of eligibility, where as many as 2 million prioritized people at elevated risk of severe COVID-19 illness remain unvaccinated. Walz in a live address on Friday explained the earlier-than-planned expansion, noting concern over rising pandemic activity due to more infectious viral variants and confidence in increasing weekly supplies of federally controlled vaccine.

“We have to outrun those variants,” said Walz, who will seek vaccine himself on Tuesday. “We have to stop the spread that’s out there, and Minnesota is one of the states where it is gaining, but the good news is we are countering it with an aggressive vaccine effort.”

The governor was in quarantine through Thursday due to contact with a staffer who tested positive for the novel coronavirus that causes COVID-19.

Walz said he was influenced by some rural vaccine providers who are in position to expand eligibility, as well as Minnesota’s overall progress. The state has risen from among the worst in the nation in January to first in March in a key measure of vaccine efficiency — with 89% of available shots in the state already administered.

Minnesota also has reached a key goal of providing vaccine to 80% of Minnesota’s senior citizens, who have sustained 89% of the state’s 6,821 COVID-19 deaths. That includes seven deaths reported on Friday along with 1,714 more diagnosed infections — which raised Minnesota’s total case count to 512,097.

The move catches Minnesota up with states such as Alaska, Arizona, Mississippi, Utah and West Virginia that had already expanded access to everyone who is eligible, but in some ways it just makes the long waiting line longer.

The new expansion adds another 1.2 million people 16 and older who are at lower risk of severe COVID-19 outcomes, including healthy adults who have been anxiously waiting their turn and teenagers who are looking for the security of vaccine to protect them in classes and during sports.

Walz challenged Minnesota to be the first state to vaccinate 80% of its entire eligible population — an amount that could achieve a level of herd immunity that stifles the spread of the virus. Needier people will still be prioritized under the new open-access system, which Walz likened to a multilane highway with seniors and others vulnerable to COVID-19 in the fast lane.

“If no one is in that lane, our providers will move to the next lane,” said Walz, encouraging people to sign up on the state Vaccine Connector to be notified when vaccine is available.

Increased supplies will help but not totally cover the new demand. Minnesota is expecting its weekly supply of 185,000 first doses — including those going to chain pharmacies under a federal contract — to increase to 304,000 first doses in early April.

Kathryn Klibanoff of Minneapolis and her husband have received first doses of Moderna vaccine already, but will be aggressively seeking appointments starting Tuesday for their 16-year-old daughter. Vaccination would ease her anxiety about going back to in-person classes April 12 and reduce her infection risks while playing Ultimate Frisbee.

“She’s really nervous about being in an environment 3 feet apart from lots of teenagers who may or may not have the best COVID hygiene,” her mother said. “So she is anxious to be vaccinated.”

The two-dose Pfizer vaccine is available to people ages 16 and 17, while the age limit for the two-dose Moderna and single-dose Johnson & Johnson versions is 18.

More infectious variants of the SARS-CoV-2 virus that causes COVID-19 appear to be responsible for some increase in pandemic activity in Minnesota and caused an outbreak centered on youth sports in suburban Carver County. The positivity rate of COVID-19 diagnostic testing has risen from 3.5% to 4.7% this month.

The 357 Minnesota hospital beds filled with COVID-19 patients on Thursday was the highest count since Feb. 6 — though well below the peak of 1,864 during the last pandemic wave.

“We are in a race between the variants and the vaccine, and we must remain vigilant and work together so the vaccines win,” said state Health Commissioner Jan Malcolm, encouraging Minnesotans to get “vaccinated as soon as you have the opportunity.”

Providers were responding in different ways to the expansion, with some offering appointments right away and others maintaining tighter restrictions on who they will schedule for appointments.

In a statement, M Health Fairview indicated “it is currently giving COVID-19 vaccines only to paid and unpaid healthcare workers who are unable to work remotely, people age 65 and older, people age 50 and older who live in multigenerational housing, and people with certain conditions or disabilities … Starting Tuesday, M Health Fairview will begin vaccinating anyone age 50 and older, people 16 and older who have a health condition identified in the state’s plan, and BIPOC people of any age.”

Some health care providers opposed the early expansion, lobbying against it until the decision was initially announced on Thursday afternoon. Many providers have found it more challenging to reach the final groups of vulnerable COVID-19 patients and are worried that the expansion will disrupt efforts to get them vaccinated.

“Opening up vaccine to everyone is almost a sign of defeat” toward vaccinating those vulnerable individuals, said Michael Osterholm of the University of Minnesota’s Center for Infectious Disease Research and Policy, “because what’s happened is the political pressure to get all these vaccine doses administered is so high that you don’t want to hold them for three days or more.”

Reaction to the expansion split in some ways along rural-urban lines. Vaccine access had been proportionally greater in some rural sections of the state that got further ahead in immunizing their health care providers and senior citizens. While many urban providers are booked solid for vaccine appointments, some rural pharmacies and providers were starting to see appointments going unfilled.

“Rural vaccinators are excited for the opportunity to move into the next tier as they had begun to exhaust the eligible populations in their communities,” said Adam Shadiow, an EMS leader and part of the Northeast Healthcare Preparedness Coalition. “Until the eligibility announcement was released by the governor’s office yesterday, many of our providers had declined a shipment of vaccine to their community for next week.”