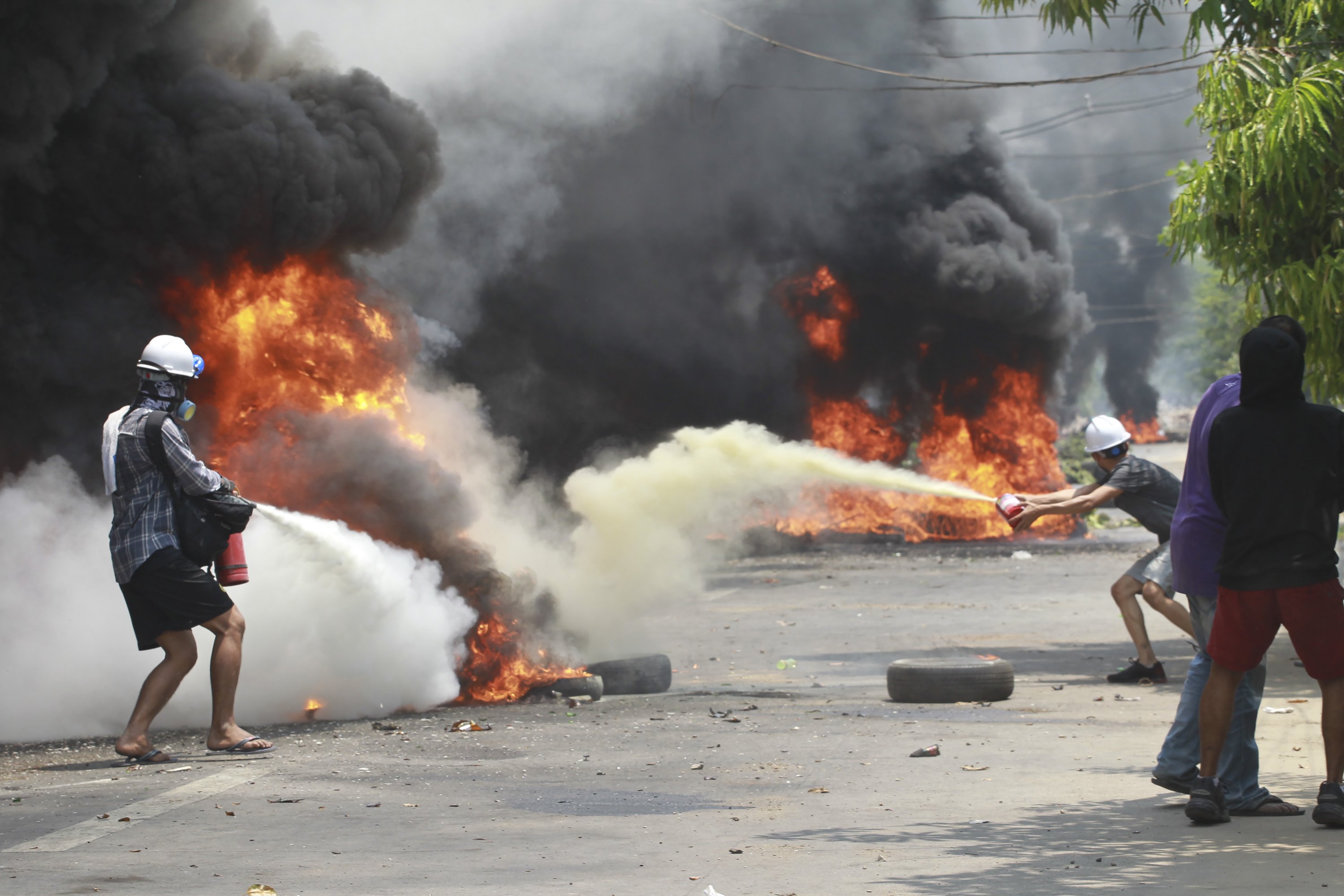 A count issued by an independent researcher in Yangon who has been compiling near-real time death tolls put the total as darkness fell at 93, spread over more than two dozen cities and towns.

Both numbers are higher than all estimates for the previous high on March 14, which ranged from 74 to 90.

Figures collected by the researcher, who asked not to be named for his security, have generally tallied with the counts issued at the end of each day by the Assistance Association of Political Prisoners, which documents deaths and arrests and is widely seen as a definitive source.

The Associated Press is unable to independently confirm the death tolls.

THIS IS A BREAKING NEWS UPDATE. The AP’s previous story is below.

As Myanmar’s military celebrated the annual Armed Forces Day holiday with a parade Saturday in the country’s capital, soldiers and police elsewhere reportedly killed dozens of people as they suppressed protests against last month’s coup.

A count issued by an independent researcher in Yangon who has been compiling near-real time death tolls put the total killed by late Saturday afternoon at 74, spread over more than two dozen cities and towns. That would make it equal to the deadliest day since the coup.

Figures collected by the researcher, who asked not to be named for his security, have generally tallied with the counts issued at the end of each day by the Assistance Association of Political Prisoners, which documents deaths and arrests and is widely seen as a definitive source. The Associated Press is unable to independently confirm the death tolls.

The killings quickly drew international condemnation, with multiple diplomatic missions to Myanmar releasing statements that mentioned the killing of civilians Saturday, including children.

“This 76th Myanmar armed forces day will stay engraved as a day of terror and dishonour,” the European Union’s delegation to Myanmar said on Twitter. “The killing of unarmed civilians, including children, are indefensible acts.”

The death toll in Myanmar has been steadily rising as authorities grow more forceful with their suppression of opposition to the Feb. 1 coup that ousted the elected government of Aung San Suu Kyi. The coup reversed years of progress toward democracy after five decades of military rule.

Up through Friday, the Association of Political Prisoners had verified 328 people killed in the post-coup crackdown. The highest daily death toll had been at least 74 people on March 14, but on that occasion all but a handful of deaths were in Yangon, the country’s biggest city.

Junta chief Senior Gen. Min Aung Hlaing did not directly refer to the protest movement when he gave his nationally televised Armed Forces Day speech before thousands of soldiers in Naypyitaw. He referred only to “terrorism which can be harmful to state tranquility and social security,” and called it unacceptable.

This year’s event was seen as a flashpoint for violence, with demonstrators threatening to double down on their public opposition to the coup with more and bigger demonstrations. The protesters refer to the holiday by its original name, Resistance Day, which marks the beginning of a revolt against Japanese occupation in World War 2.

State television MRTV on Friday night showed an announcement urging young people — who have been at the forefront of the protests and prominent among the casualties — to learn a lesson from those killed during demonstrations about the danger of being shot in the head or back.

The warning was widely taken as a threat because a great number of the fatalities among protesters have come from being shot in the head, suggesting they have been targeted for death. The announcement suggested that some young people were taking part in protesting as if it was a game, and urged their parents and friends to talk them out of participating.

In recent days the junta has portrayed the demonstrators as the ones perpetrating violence for their sporadic use of Molotov cocktails. In contrast, security forces have used live ammunition for weeks against overwhelmingly unarmed and peaceful crowds.

The military government does not issue regular casualty counts, and when it has released figures, the totals have been a fraction of what independent parties such as the U.N. have reported. It has said its use of force has been justified to stop what it has called rioting.

In his speech Saturday, Min Aung Hlaing used the occasion to try to justify the overthrow of Suu Kyi’s government, accusing it of failing to investigate irregularities in last November’s general election, and repeating that his government would hold “a free and fair election” and hand over power afterward.

The military has claimed there were irregularities in the voting rolls for the last election, which Suu Kyi’s National League for Democracy party won in a landslide.

The junta detained Suu Kyi on the day it took power, and continues to hold her on minor criminal charges while investigating allegations of corruption against her that her supporters dismiss as politically motivated.

Phil Robertson, deputy Asia director for New York-based Human Rights Watch, said Saturday’s events showed that the military, known in Myanmar as the Tatmadaw, should be prosecuted in international courts of law.

“This is a day of suffering and mourning for the Burmese people, who have paid for the Tatmadaw’s arrogance and greed with their lives, time and time again,” he said.

Sorgente articolo:
Dozens killed in one of deadliest days since Myanmar coup – The Associated Press