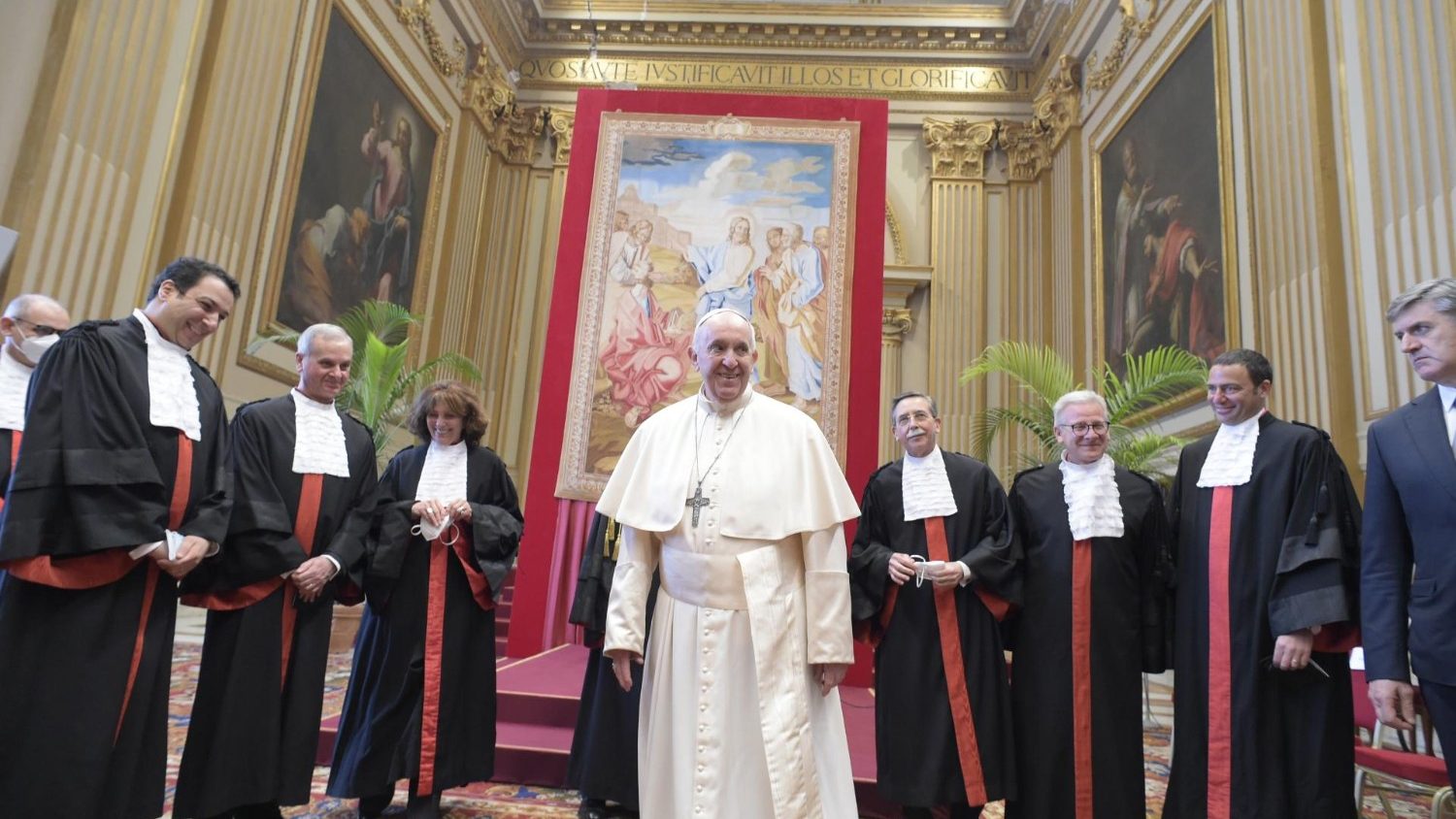 At the beginning of the Vatican’s judicial year, Pope Francis expressed his gratitude and recognition for the work of judiciary, especially in light of reforms made in recent years. “These changes,” the Pope said, “will be more fruitful to the extent that they are accompanied by further reforms in the penal sphere,” directed above all at combatting and repressing financial crimes; promoting and speeding up international cooperation between Vatican institutions and other financial oversight bodies; and other initiatives undertaken by the Vatican police.

The meaning and task of the Church

Pope Francis began his address by noting that the inauguration of the judicial year was taking place, due to anti-Covid measures, in the Hall of Blessings, located between St Peter’s Square and the main body of the Basilica. “In this singular position,” Pope Francis said, “one can see the meaning and task of the Church,” established by Christ “to carry out the mission of supporting the truth… and ‘proclaiming, even by its own example, humility and self-sacrifice.’”

The Holy Father insisted on the “urgency” of identifying and introducing new forms of cooperation, as requested by financial supervisory institutions in order to achieve quicker results in investigations. He expressed his hope that meetings at the appropriate levels might soon take place in order to make collaboration more effective.

Inspired by principles of ecclesial life

At the same time, Pope Francis noted that measures aimed at “absolute transparency of the institutional activities of the Vatican State” must be inspired “by the founding principles of ecclesial life,” while also taking into account internationally recognised “best practices.”

He emphasized in particular the importance of ensuring the equality of all members of the Church, and their equal dignity and position, in the procedural system of the Vatican judiciary, calling for an end to privileges “that are no longer in keeping with the responsibilities each individual has in building up the Church.”

A duty of witness

Despite being a relatively small entity, the Vatican nonetheless has a “particular duty of witness,” the Pope said. “We are called to witness, concretely and credibly, in our respective roles and tasks, to the immense patrimony of values that characterizes the Church’s mission, to her being ‘salt and light’ in society and in the international community, especially in moments of crisis such as the present one.”

He urged those present to reflect on the fact that in carrying out their daily work, they “offer a precious contribution so that the Church, in this very small Vatican City State, may give a good example of what she teaches in her social magisterium.”

And he invited all those “called to work for the cause of justice,” to not be afraid to “waste time” in prayer, noting that “only in prayer, do we draw from God, from his Word, that inner serenity which enables us to carry out our duties with magnanimity, equity and foresight.”

The eyes of Justice look to heaven

Illustrating his message with an appeal to the artistic tradition, Pope Francis noted that painting and sculpture represent justice as weighing and balancing opposing interests, on the one hand, while defending what is right on the other. “Christian iconography then adds to the previous artistic tradition a detail of no small importance,” he said: “The eyes of Justice are not blindfolded, but turned upward, and look to Heaven, because only in Heaven there is true justice.”

Pope Francis said he hoped that, in the new judicial year, “this awareness would accompany and inspire” his hearers in their “daily work in the service of justice.” He said, “I pray for this, and I accompany you with my blessing,” before concluding his address with a request that they, in turn, pray for him.