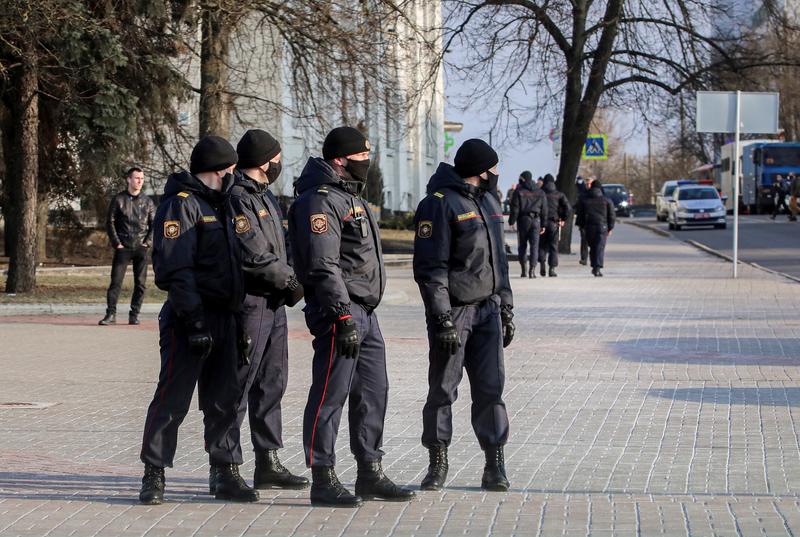 MOSCOW (Reuters) – Belarus police detained over 100 people on Saturday, among them three editors of online news platforms, as they gathered for fresh protests against President Alexander Lukashenko, according to reports from the outlets and the Russian RIA state-run news agency.

The city square in Minsk where the demonstration was called to start on Saturday afternoon was surrounded by police vehicles and prison vans, and roads leading to it were closed.

No large-scale demonstrations took place at the site, though more than 100 people were detained during the course of the day, RIA cited a spokeswoman for the Belarus Interior Ministry as saying.

Videos shared on Belarus opposition media channels showed black-clad police officers violently detaining people on the square and in other parts of the city, including what appeared to be passersby.

In many videos, people detained did not appear to be carrying any banners or flags. Reuters could not immediately verify the videos.

“Over 100 people have been transported to [police stations] for administrative violations,” the ministry’s Olga Chemodanova was quoted by RIA as saying.

“These were cases of one-person pickets and other public disturbances,” she said, adding there were no major protests on Saturday, despite the opposition’s call.

Among those detained were Galina Ulasik and Anna Kaltygina, editors at opposition news outlet TUT.by, said the organisation, whose channel on the Telegram messenger app has over 400,000 followers.

Another outlet, Nasha Niva, with 90,000 Telegram readers, said its editor-in-chief Yahor Martsinovich was also detained at the square, along with a photographer.

The platform, which regularly shares videos of detentions and police brutality filmed by its followers, is a significant source of information on anti-government protests in Belarus.

The demonstrations became a weekly fixture in the capital and beyond after an election in August returned Lukashenko to power that opposition figures deemed rigged.

After a two-month lull, opposition leaders have called on the public to ramp up protests once again.

Belarus authorities warned early on Saturday that anyone participating in these actions was liable to criminal prosecution.

The Minsk Investigative Committee said it had opened a case against the authors of posts on the Telegram messenger app that called for people to go out on the streets.

Dozens were detained on Thursday during a relatively minor protest, coordinated to coincide with ‘Freedom Day’, an unofficial anniversary marking Belarus’ 1918 declaration of independence from Russia, a period that proved short-lived.

Over 34,000 people have been detained since the start of regular demonstrations in August last year, which attracted hundreds of thousands of people and formed the biggest challenge so far to Lukashenko’s nearly 27-year-rule.

Lukashenko denies electoral fraud and has accused the West of sponsoring the protests.

On Friday, Belarus was disqualified from the Eurovision Song Contest after lyrics of submitted songs were deemed to be mocking of anti-government protests.