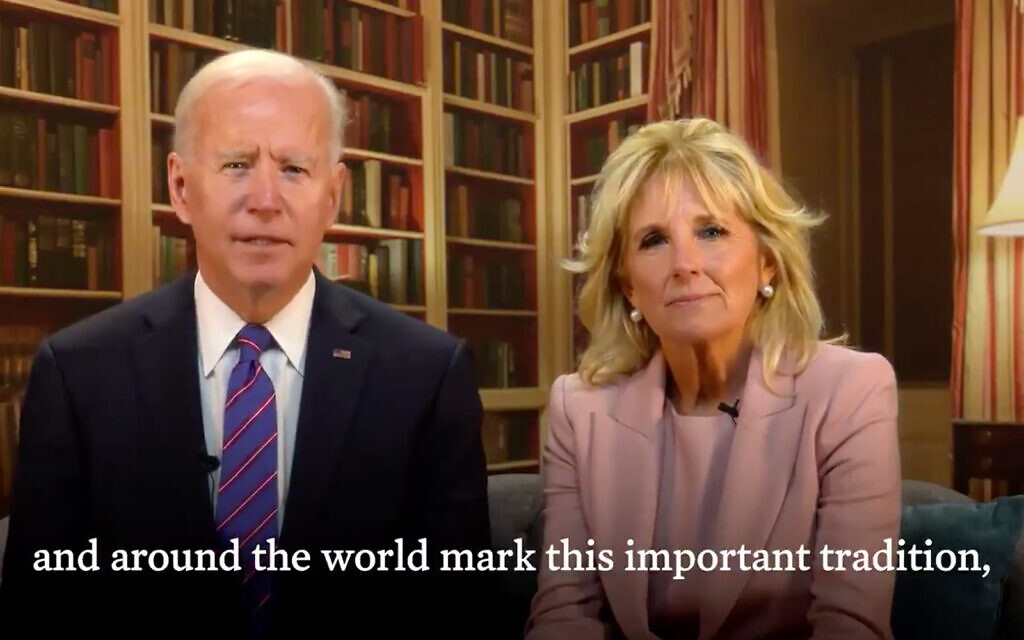 US President Joe Biden and his wife, Jill, issued a statement welcoming Passover on Friday, a day ahead of the holiday’s start.

Biden likened the holiday, which marks the Jewish Exodus from bondage in Egypt, to the recovery from the COVID-19 pandemic.

“As we continue working to defeat this pandemic, we continue to confront discrimination and prejudice. As we seek to rebuild from the time of struggle and loss, we need the inspiration of the Passover now, more than ever,” Biden said in a video posted to his official Twitter page.

“This year, like last, we’re still planning virtual celebrations, blessing the matzah and wine over the screen rather than side by side. There are still some grandparents who haven’t been able to embrace their grandchildren since the last Passover, and there are far, far too many empty chairs at our seder, a solemn reminder of all we’ve lost,” he said.

“We can close the seder by adapting a familiar refrain — not only next year in Jerusalem, but next year in person, next year, together.”

As we recall the Passover story of overcoming adversity, finding hope, and becoming free, we find a renewed salience. This weekend, as Seders close with the familiar refrain, “Next year in Jerusalem,” we offer an additional prayer: Next year in person. Next year, together. pic.twitter.com/TBU2dXMPCQ

“At its heart, Passover is a story of overcoming adversity and finding hope, of summing the resilience and resolve to emerge from a long dark night to a brighter morning,” Jill Biden said. “This celebration is Jewish, but its message is universal. It resonates from generation to generation.”

Former president Barack Obama launched White House seders in 2009; they have until now been closed to the public.

Emhoff shared anecdotes about his Jewish upbringing and used the holiday to deliver a message about the role of women in the bible. He was joined during the event by Harris and the Bidens.

Biden, a Roman Catholic, has Jewish family members and longstanding ties to Israel.