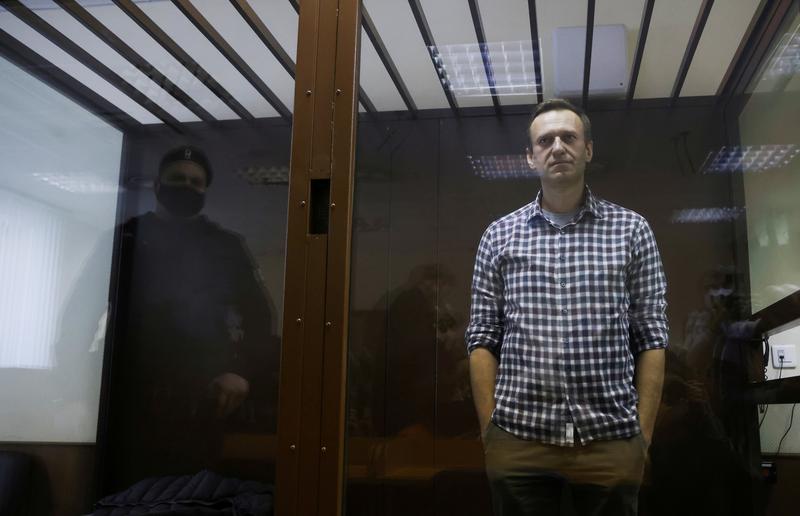 MOSCOW (Reuters) – Jailed Kremlin critic Alexei Navalny asked for help from a public commission to get access to painkiller injections for severe pain in his leg, the head of the commission said in a statement published on late on Saturday.

Navalny was jailed last month for two and a half years on charges he called politically motivated. He was arrested as he returned to Russia from Germany in January, where he had been recovering from what doctors said was a nerve agent poisoning.

The 44-year old opposition politician has said in a statement that his request for treatment by a civilian doctor had been rejected and that he was being woken up by a guard every hour during the night in a deliberate attempt to undermine his health.

Members of a local Public Monitoring Commission, a semi-official body with access to Russian prisons, visited Navalny in his penal colony 100 km (60 miles) east of Moscow on Friday.

“From a conversation (with Navalny) we learned that he feels pain in his leg and he asked for help in getting injections of Diclofenac to reduce pain. He is still able to walk,” said Vyacheslav Kulikov, the head of the commission, in an online statement.

The commission did not say if Navalny received the painkiller injections he asked for.

“We… made sure that his request had been recorded officially,” Kulikov said.

A spokeswoman for a regional department of Russia’s prison authority declined any immediate comment.

Diclofenac is a medicine that reduces inflammation and pain and is used to treat problems with joints, muscles and bones, information on Britain’s National Health Service website said.

Navalny has said that his only treatment was two Ibuprofen pills per day and his diagnosis was unclear.

Navalny’s lawyer Vadim Kobzev, who visited the politician the day before the public monitors, said he was not aware of his request for the painkiller injection.

Two dozen Russian medics said in a open letter published online on Sunday that Navalny may be suffering from consequences of the poisoning or from a new illness caused by incomplete recovery.

“We are afraid of the worst. Leaving a patient in this condition without help, may be even surgical, may lead to severe consequences, including an irreversible, full or partial loss of lower limb functions,” the doctors said in the letter, published by Russian media outlet The Insider.