The meeting took place at Lapid’s home in Tel Aviv and according to the Kan public broadcaster, was facilitated by Taibe mayor Shuaa Masarwa Mansour, who is close to both party leaders.

Lapid and Abbas “discussed the possibility of forming a new government. At the end of the meeting, the two sides agreed to continue talks between them in the coming days,” Ra’am said in a statement.

According to the Ynet news site, the Islamist party chief presented a number of demands for potential support, including voting freedom on LGBT matters, a freeze on the controversial Jewish nation-state law and the Kaminitz Law (legislation seen as targeting Arab illegal building), as well as recognition of unrecognized Bedouin villages in the Negev.

Abbas also said there would also need to be a concrete plan to work to eradicate crime in Arab communities, the report said.

Ra’am later denied reports on its demands to Lapid, calling them “rumors.” 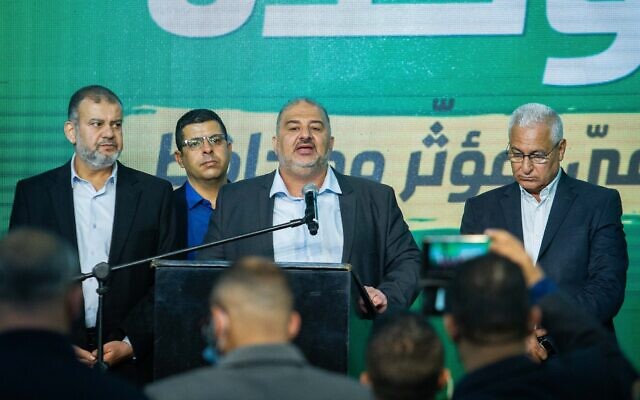 Ra’am leader Mansour Abbas and party members at the Ra’am headquarters in Tamra, March 23, 2021, at the end of voting on election day. (Flash90)

The meeting came a day after Ayoub Kara, a lawmaker from Prime Minister Benjamin Netanyahu’s Likud party, met with Abbas. Kara told Army Radio he received requests from within Likud to visit Abbas, but didn’t specify from who.

Abbas told Nas Radio on Sunday that his party was “not inclined more to either [the pro- or anti-Netanyahu] camp. We are the third camp, and are closer to our Arab community and its interests… especially of our people in the Negev, in the unrecognized villages.” He highlighted the surging “violence and crime in the Arab sector,” and the community’s “social and economic difficulties.”

Netanyahu repeatedly ruled out relying on Ra’am to form a government in the run-up to the March 23 elections, calling the party anti-Zionist. However, some Likud lawmakers have entertained partnering with Ra’am following last week’s elections, which saw the premier and his right-wing religious allies again fall short of a majority. 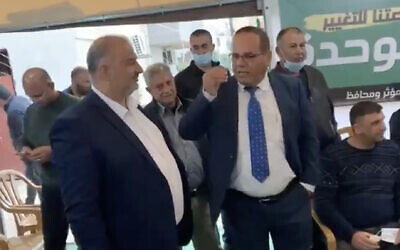 However, the seemingly improbable possibility of the Islamist party doing so appeared to shrink further after both Ra’am and members of the far-right Religious Zionism party ruled out joining forces. An unsourced Channel 13 report on Saturday said Netanyahu will work in the coming days to try to get Religious Zionism head Bezalel Smotrich and his far-right faction partner Itamar Ben Gvir to soften their stance toward Ra’am.

The meeting between Lapid and Abbas came as the so-called “change bloc” in the incoming Knesset was holding intensive discussions as it attempts to create a blueprint for an alternative government to one led by Netanyahu — but such efforts were marred by fighting over who should lead the bloc, as well as radically differing ideologies and political red lines that could doom any such effort from the onset.

According to Hebrew-language media reports on Sunday, Lapid has reached out to the Arab-majority Joint List and is expected to hold meetings with the faction in the coming days.

On Friday, Lapid met with Yisrael Beytenu leader Avigdor Liberman for the first time since Tuesday’s election to discuss ways to cooperate. The two agreed to remain in touch and meet again soon, a spokesperson for Yesh Atid said. 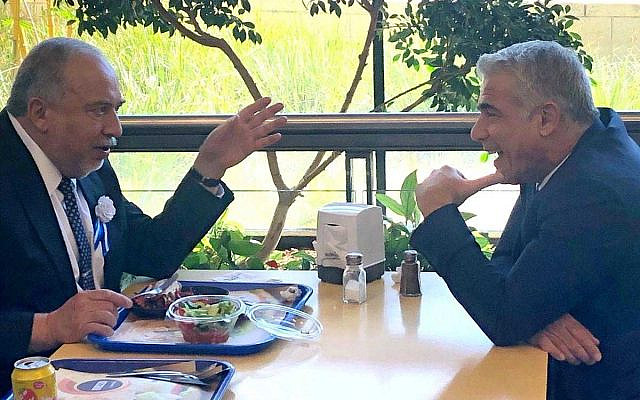 Yisrael Beytenu leader Avidgor Liberman (L) talks with then-Blue and White No. 2 Yair Lapid in the cafeteria of the Knesset on October 3, 2019. (Raoul Wootliff/Times of Israel)

Meanwhile, in a statement Friday, Yamina leader Naftali Bennett said he’d spoken over the past two days with the heads of all non-Arab parties from the right and the left, wished them a happy Passover, and “stressed the need to take responsible, principled action in order to release Israel from chaos and allow it to return to functioning properly as soon as possible.”

According to a report by Channel 12 news Friday night, one proposal on the table was for Lapid and Bennett to lead a “national government of healing” for a limited period of time, possibly a year, during which time the two would rotate the premiership between them.

The report said such a coalition would be a minority in the Knesset, composed of the 52 seats of Yesh Atid, Blue and White, Yamina, Labor, New Hope and Yisrael Beytenu, supported from the outside — or at least not opposed — by Meretz and the majority-Arab parties.

This government would ensure the passage of a state budget for the first time since 2018 and aim to stabilize the country and the economy in the wake of the political chaos and coronavirus pandemic, before a new election is called.

The proposal also suggests that once such a government is formed, it will seek to bring in the ultra-Orthodox parties who currently remain resolutely in Netanyahu’s camp — apparently assuming Haredi lawmakers’ loyalty to the premier will be tested once he and they are no longer running the government.

However, the report noted that such a plan requires parties to jump through many hoops, some of them potentially insurmountable — chiefly the need for right-wing parties Yamina and New Hope to agree to form a government with the tacit support of the Arab, non-Zionist parties, a move that could be political suicide for those parties’ leaders among their right-wing base. 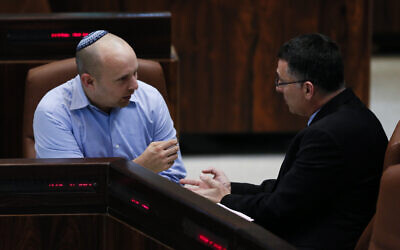 New Hope leader Gideon Sa’ar and Yamina’s Bennett met at the latter’s home to discuss potential cooperation, Channel 12 reported. Sa’ar has vowed not to join a Netanyahu-led government, while Bennett has not done so but is widely seen as preferring not to ally with the prime minister.

The report said Sa’ar made it clear to Bennett that he would not fight him for leadership of the “change bloc.”

Associates of Bennett told Channel 13 on Friday that there was no chance he’d abandon Netanyahu’s bloc unless he is prime minister first in the new government, and not Lapid. But the network also said Lapid is currently seeking to get a majority of votes from party leaders when they head to give President Reuven Rivlin their recommendations on April 5, and to be the first to be given a crack at forming a government.

Meanwhile, the network said Netanyahu, despite winning only 59 seats for his bloc of supporters (if Bennett’s Yamina party is included in the count), is making great efforts to woo former Likud MK Sa’ar over to his side and clinch a majority. Through emissaries, the premier offered his longtime rival a deal by which he will resign after one more year in power and hand the premiership to him.

Sa’ar, noting the similarity to Netanyahu’s 2020 power-sharing deal with Blue and White’s Benny Gantz, one Netanyahu avoided honoring, was said to respond wryly: “Tell him only on the condition that Deri is a guarantor.”

Minister of the Interior Aryeh Deri, head of the ultra-Orthodox Shas party, was famously reported to have vowed to Gantz that he’d ensure Netanyahu honored their coalition deal, only to eventually renege on that promise.