A Likud lawmaker who oversaw polling stations for the party said Saturday no evidence was found of voter fraud in Tuesday’s election and that the vote count had not been skewed. The MK, Shlomo Karhi, also rejected blame for the poor showing by Prime Minister Benjamin Netanyahu’s party.

Having failed to win enough seats to smoothly muster a majority coalition, Prime Minister Benjamin Netanyahu has reportedly set up a team to examine whether any problems with the vote or the count could yield another Knesset for Likud and its allies at the expense of the anti-Netanyahu camp.

MK Karhi, the deputy chairman of the party’s election committee who was in charge of its representatives at polling stations, has reportedly been blamed by the premier and other Likud lawmakers after the pro-Netanyahu bloc again came short of a majority in the vote, Israel’s fourth in two years.

Final results showed Likud won 285,000 fewer votes this week than in the elections last March, dropping from 36 to 30 seats in the 120-seat Knesset.

The Kan public broadcaster reported Thursday that the premier and other Likud lawmakers blamed Karhi for the lost votes.

“You didn’t deliver,” Netanyahu told Karhi, according to the report.

Karhi denied the report on Friday, calling it “a complete lie,” in a Twitter thread defending the party’s handling of the election.

Since being tasked by Netanyahu with overseeing the party’s “ballot box staff,” Karhi said he had dedicated all his time to the position.

“The main aim was to do everything to prevent any possibility of fraud, skewing results and safeguarding the integrity of the elections in the entire country! In every sector!” he wrote. 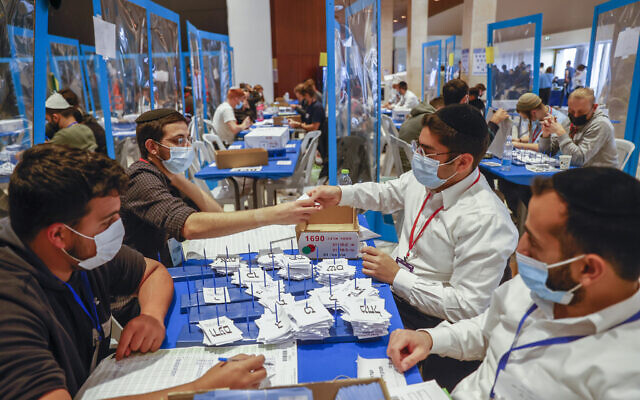 Karhi, who was also Likud’s representative on the Central Elections Committee, touted a number of measures to increase election security and confidence in the vote count, such as photographing results immediately after ballots were counted.

“I’m sure that without these, we would have been in a much more difficult position in terms of results,” he said.

He also denied there were problems with an application used to track voter turnout, after claims it was to blame for the decreased turnout for Likud. The Kan report said Likud officials believe former supporters stayed home during the vote — though it is also possible they migrated to other parties.

“It’s disappointing, but this is the result,” said Karhi, who is 24th on Likud’s electoral slate and set to enter the incoming Knesset. “We didn’t allow any opening for fraud or skewing the results and we fought for every vote for Likud.”

“Thanks to all the information we gathered on election day, including complete protocols of all the ballot boxes that we already have… I recommended to the prime minister to establish a team of Amit Halevi and Simcha Rothman and the main branch, which will go over all the protocols to do another check,” Karhi said.

He seemed to be referring to a team Netanyahu reportedly ordered be formed to search for potential mistakes and problems with votes for the Joint List, seeking to annul some 2,600 votes to secure an extra seat for Likud at the Arab faction’s expense and shift the Knesset balance slightly in his favor. 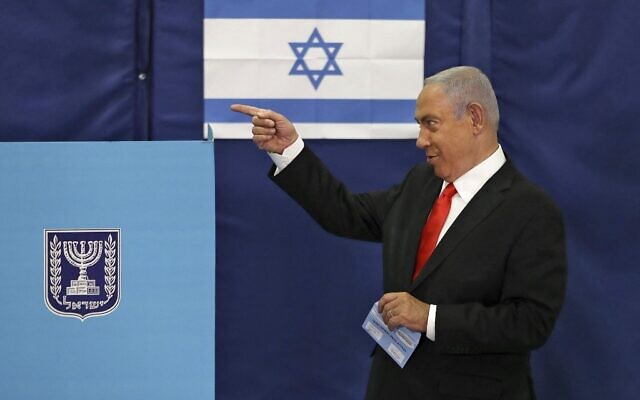 Benjamin Netanyahu gestures as he votes at a polling station in Jerusalem on March 23, 2021 in the fourth national election in two years. (Ronen Zvulun/Pool/AFP)

Karhi’s comments came after the Israel Hayom newspaper said the team that Netanyahu ordered be formed will focus on finding discrepancies at polling stations with a high turnout for the Joint List in Arab towns such as Umm al-Fahm, Taybeh, Jaffa and Kfar Manda.

The report said the team is made up of Likud MK Amit Halevi, Religious Zionism MK-to-be and lawyer Simcha Rothman and lawyer Michael Rabilo. Netanyahu reportedly met with the three on Wednesday to examine the legal options open to Likud.

Rothman, who was elected to the Knesset as the fourth candidate on the far-right Religious Zionism slate, confirmed to the paper that the team had been tasked with finding “mistakes and forgeries.”

Even if the effort was successful, Likud would still fall short of a majority with 60 seats, even with the support of the right-wing Yamina party, which has not committed to either the pro- or anti-Netanyahu bloc. Netanyahu was said to be seeking “defectors” in other parties to jump ship and join his coalition to put him over the top and form a majority. 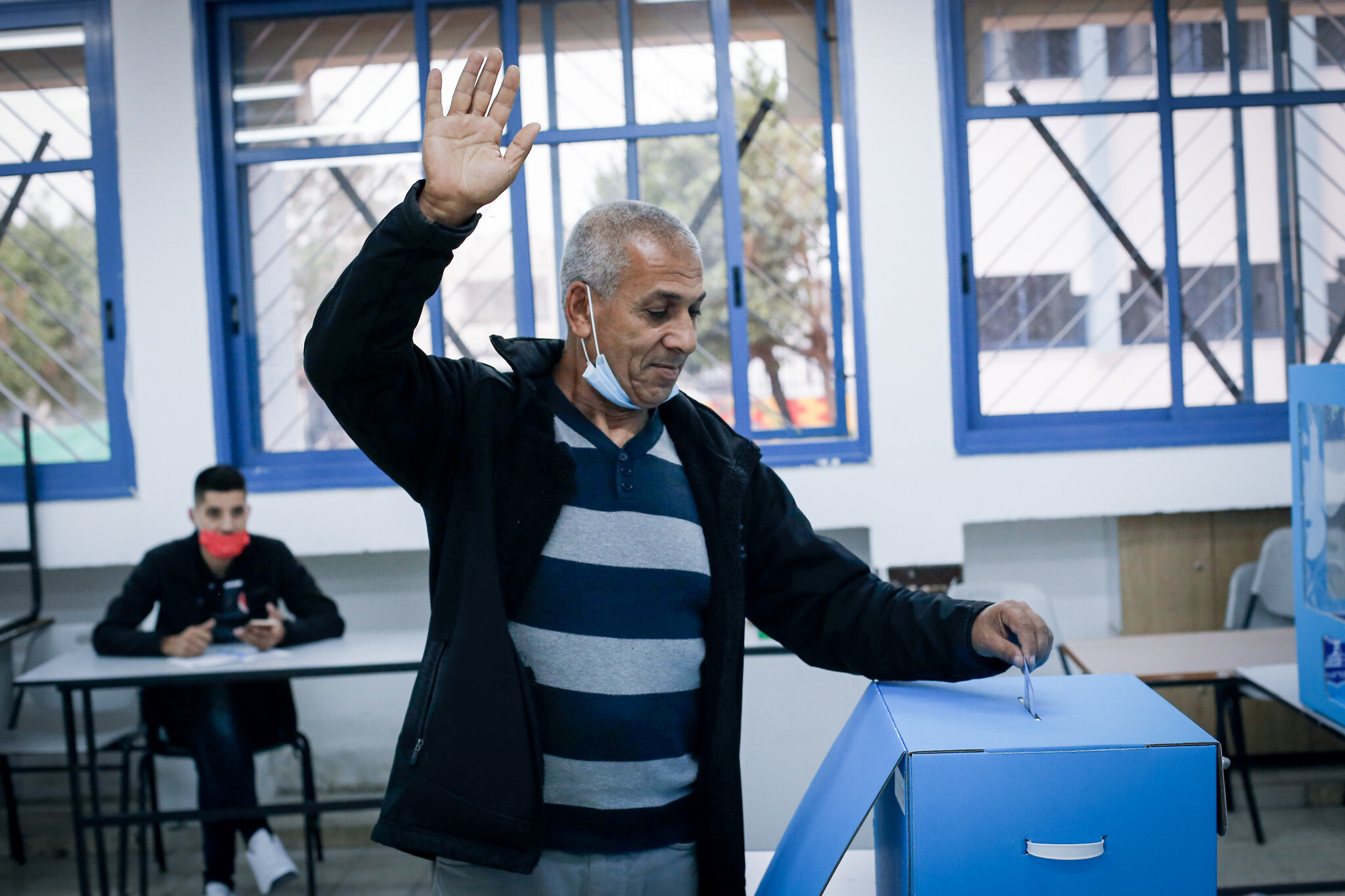 An Israeli cast his vote in the general election, in Kafr Manda, northern Israel, on March 23, 2021. (Jamal Awad/FLASH90)

Likud has in past elections claimed voter fraud among Arab Israeli voters, angering the Arab community and the center-left, but has failed to provide proof of any mass fraud.

Ahead of Tuesday’s election Netanyahu abandoned such rhetoric and attempted to embrace the Arab public, in a bid to net support from the community.

The effort saw Likud win a much larger percentage of the vote in some Arab communities, but it amounted to very little in actual numbers — both a result of low turnout among the Arab public and the fact that support for Likud, even multiplied, remained minuscule in these communities.

Before the election, Knesset Speaker Yariv Levin of Likud attacked the Central Elections Committee as “biased” and “illogical,” but denied a Trump-like plan to dispute the results and promised to accept the voters’ will.

With all votes counted Thursday evening, results showed Netanyahu had failed, for the fourth time in a row, to win a clear parliamentary majority. The results left both the premier and his political opponents once again without a clear path to forming a majority coalition, and heralded enduring gridlock and a potential fifth election.

Sorgente articolo:
Likud MK tasked with overseeing polling stations says there was no voter fraud – The Times of Israel