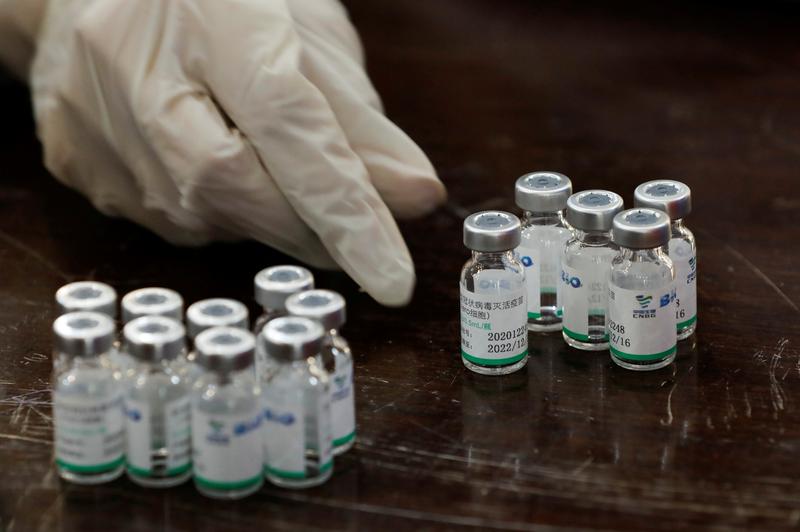 BEIJING (Reuters) – China National Pharmaceutical Group (Sinopharm) will need to assess results from overseas Phase III clinical trials to decide whether its two-shot COVID-19 vaccine should be followed by a booster shot, a company executive said on Sunday.

Regulators and vaccine developers are looking at whether booster doses are necessary amid concerns that emerging variants of the new coronavirus might weaken protection of vaccines designed against older strains.

“Is a booster shot needed? When will the booster be given? The answer should be based on the results of future phase III clinical studies,” Zhang said at a news conference.

Lab testing was ongoing for variants found in Brazil and Zimbabwe, Zhang said.

The effect of antibodies induced by Sinovac Biotech’s vaccine declined against a variant identified in South Africa, while the effect against a variant found in Britain remained similar to that against the older Wuhan variant, Gao Qiang, general manager at Sinovac unit Sinovac Life Sciences, said during the same presser.

Sinovac is importing the variant from Brazil for vaccine research and development, and work tailored to the South Africa variant had already started, Gao said.

The correlation between antibody levels and the vaccine’s efficacy was not immediately clear, a Sinovac spokesman said.

Sinovac was also testing a third booster shot in a China-based clinical trial, with participants given a third dose around eight months after receiving the second, the company said on Tuesday.

The South Africa variant could pose a greater threat than others based on antibody responses triggered by the vaccine from CanSino Biologics Inc (CanSinoBIO), a company executive said earlier this month. Antibodies triggered by one dose of CanSinoBIO’s vaccine showed a roughly four-fold drop in their ability to block the 501Y.V2 variant, the firm’s chief scientific officer, Zhu Tao, said. The weakening effect by other variants fell into a less severe range, he added.