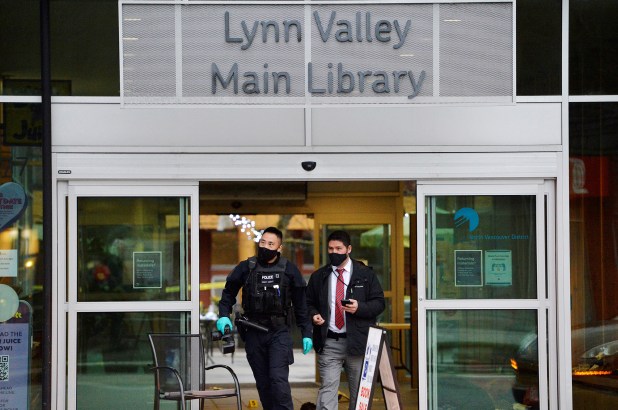 Authorities are seen at Lynn Valley library where a knifeman allegedly killed one woman and injured five others in North Vancouver, British Columbia, Canada. REUTERS/Jennifer Gauthier

Dramatic video footage shows the moment an attacker who allegedly went on a stabbing spree at a Canadian library was wrestled to the ground and detained by police, according to a report Sunday.

The knifeman — who is accused of killing one woman and injuring at least five other people in North Vancouver Saturday — is seen in a crosswalk before he suddenly falls to the ground for reasons not yet clear, according to footage posted by the UK Sun.

“He cut himself!” someone can be heard shouting in the video.

Six cops — some of them with guns drawn — then storm the man as he lays in the middle of the street before arresting him, according to the outlet.

The take-down came after the yet-to-be named suspect slashed his victims on Saturday afternoon at the Lynn Valley library branch.

A man who works at a bank across the street later said the attacker was arrested after possibly being shot with rubber bullets by cops.

Other witnesses said they saw victims,  including a woman and her 7-year-old son, with  multiple stab wounds outside the library.

“I was in the library community room and just outside, suddenly, we hear yelling and everyone stopped and stared, everyone started running out the side door,” Mary Craver, a witness said, according to the outlet.

“I just started running too. We ran all the way to the mall.”

Sergeant Frank Jang, a homicide investigator for the Royal Canadian Mounted Police, said Sunday the suspect was still alive and has a previous criminal record. Police have not released the man’s name.

“Obviously the question is why did this happen,” Jang said. “We believe we know the who, the what and the when. It is our job now to determine the why.”