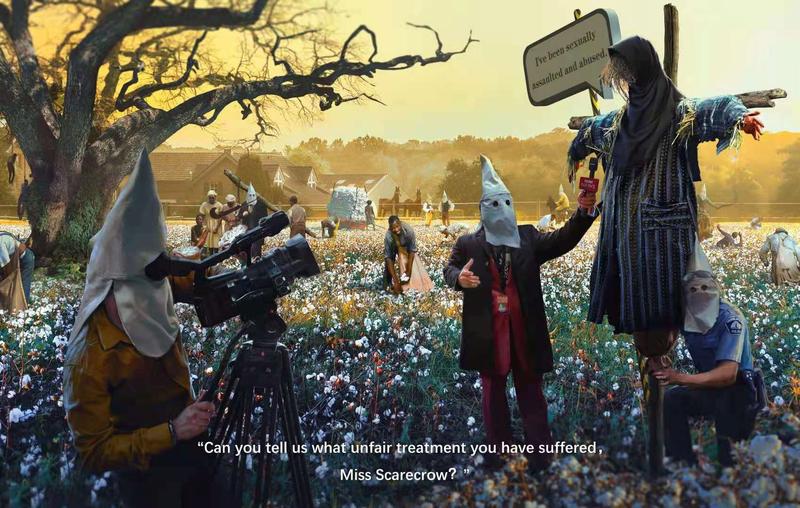 The digital art by the artist who goes by the name Wuheqilin, referring to a one-horned Chinese mythical beast, shows two figures with white pointed hoods interviewing a scarecrow in a field of cotton and Black slaves.

One of the journalists holds up a microphone with a logo that looks similar to “BBC News”.

At the bottom of the illustration reads: “Can you tell us what unfair treatment you have suffered, Miss Scarecrow?”

“I’ve been sexually assaulted and abused,” a placard next to the scarecrow says.

Steadying the cross on which the scarecrow is held is a hooded figure wearing a Minneapolis police uniform, an apparent reference to the police officer who pressed his knee on the neck of a dying George Floyd last year.

Western governments and rights groups have accused authorities in the western Chinese region of Xinjiang of detaining and torturing Uighurs in camps, drawing fierce denials from Beijing, who says the camps are vocational training centres that help combat religious extremism.

Earlier this year, BBC reported that women in the camps had been subject to rape, sexual abuse and torture.

The Chinese foreign ministry said at the time that the BBC report was “without factual basis” and the people interviewed by the BBC have been “proved multiple times” to be “actors disseminating false information”.

Last week, Swedish clothing retailer H&M faced a public backlash in China when social media users circulated a statement the company made last year announcing it would no longer source cotton from Xinjiang.

The assault on Western brands followed coordinated sanctions by the United States, the European Union, Canada and Britain on Chinese officials for alleged human rights abuses in Xinjiang, which Washington has said have amounted to genocide.

In Wuheqilin’s illustration, which has garnered 1 million “likes”, the blood-red letters “HM” can be seen carved onto the trunk of a tree, while in the background is a black antique cotton scale that looks similar to Nike’s swoosh logo.

Entitled “Blood Cotton Initiative”, the illustration also refers to the Better Cotton Initiative (BCI), an international group that promotes sustainable cotton production which said in October it was suspending its approval of cotton sourced from Xinjiang, citing human rights concerns.

Nike, H&M and a number of Western brands are BCI members.

Wuheqilin, who has 2 million followers on China’s Twitter-like microblog Weibo, in December published a digitally manipulated image of an Australian soldier holding a bloodied knife to the throat of an Afghan child, drawing the fury of Australian Prime Minister Scott Morrison.