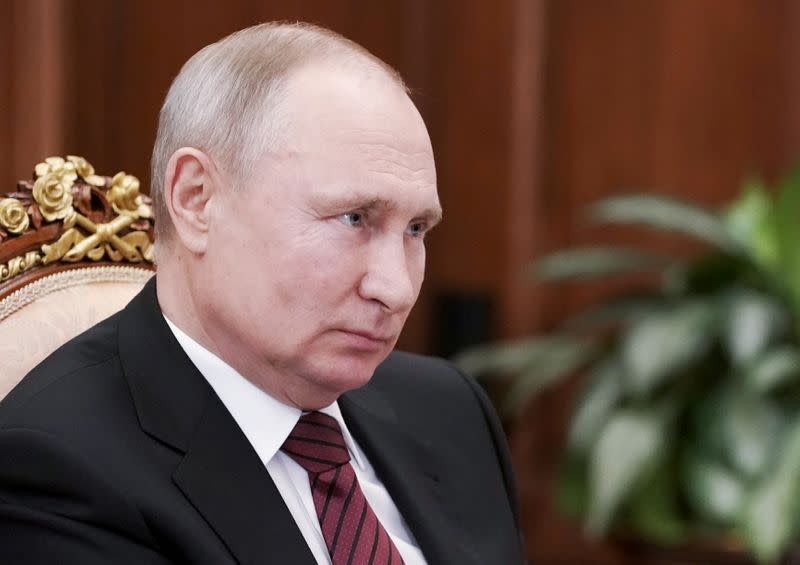 MOSCOW (Reuters) – Russian President Vladimir Putin said on Sunday he had experienced minor side effects from the coronavirus vaccine after receiving the first shot on Tuesday, the Interfax news agency reported, citing a TV interview.

“I woke up the next morning after the vaccination and it seemed to me I felt slight pain in muscles. I took a thermometer… my temperature was normal,” he told the state Rossiya 1 TV channel.

He said he also had an uncomfortable feeling on the site of the injection.

Putin did not reveal which of three Russian vaccines he had taken, saying only the doctor who inoculated him knows that.

The Kremlin announced Putin’s decision to get immunised against the coronavirus in December and the president said the delay was due to a need to combine it with other vaccines he planned to receive.

Putin said that all three Russian vaccines, the most well-known and widely-available of which is Sputnik V, were almost equal.

Nearly two-thirds of Russians are not willing to receive the Sputnik V vaccine, according to independent pollster Levada Center, as of March 1, with most respondents citing side effects as the main reason.

Russia started its vaccination campaign against the coronavirus in December. Last Monday Putin said that 4.3 million out of 144 million Russians had so far got two shots of a vaccine.

Russia has registered over 4.5 million coronavirus infections to date.

Putin said he expected Russia to reach herd immunity and lift pandemic-related restrictions by the end of summer.

Herd immunity refers to a situation where enough people in a population have immunity to an infection to be able to effectively stop the disease from spreading.

With the new coronavirus outbreak, some scientists hope that herd immunity would kick in when between 50% and 70% of a population is immune.