Bennett is refusing to commit to ousting Netanyahu unless he is given the premier position, which Lapid won’t cede, Channel 13 reported Monday.

Despite the ambitious demand, Bennett told his fellow party members and close activists that he stands by his commitment to ensure Israel doesn’t head to a fifth round of elections in two years, Channel 12 News reported. 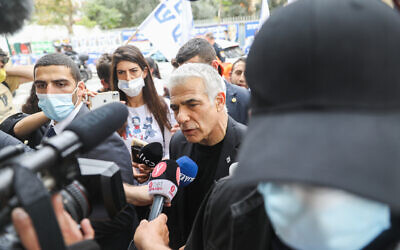 Lapid will reportedly receive a boost in his bid for the premiership from the predominantly Arab Joint List party, five of whose six members are expected to recommend him for the role, the Kan public broadcaster reported Monday.

However, the Joint List’s nationalist Balad faction will not recommend Lapid as prime minister under any circumstances, and its leader is not expected to attend a meeting later this week between Joint List chiefs and Lapid, Army Radio reported.

MK Ahmad Tibi, leader of the Joint List’s Ta’al faction, told Channel 13 he will meet with Lapid this week, noting that his party will never recommend Netanyahu.

“For us, that crosses a red line,” Tibi said, referring to Netanyahu’s partners Bezalel Smotrich and Itamar Ben Gvir of the far-right Religious Zionism party. 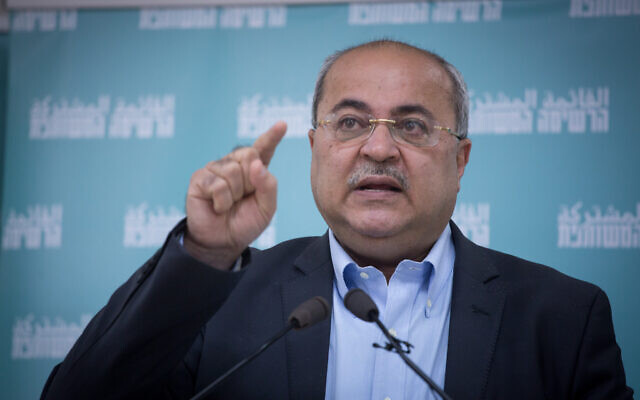 Religious Zionism won six seats in the election, making it a key building block in Netanyahu’s quest to remain in power.

A persistent question mark in the coalition-building efforts has been Mansour Abbas, the leader of the Islamist Ra’am party, which split off from the Joint List in the election and is seemingly in the kingmaker role. Abbas, though he has indicated he could back Netanyahu, has said he will not do so if Religious Zionism is part of the coalition.

Abbas intends to make a high-profile press statement in the coming days, with Channel 12 reporting that he intends to once again pledge support for cooperation with Israel’s Jewish majority, and seek to further legitimize the option of his party being part of a ruling coalition. 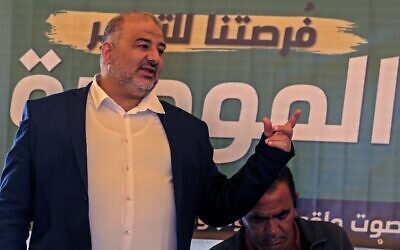 Mansour Abbas, head of the Islamist Ra’am party, speaks to a crowd in the northern town of Maghar on March 26, 2021. (Ahmad Gharabli/AFP)

However, some Likud lawmakers have entertained the option of partnering with Ra’am following last week’s elections, which saw the premier and his right-wing religious allies again fall short of a majority.

Lapid on Sunday night met with Benny Gantz, who leads the centrist Blue and White party, as he continued his efforts to build a coalition.

Gantz and Lapid discussed ways to form a new government during their meeting, according to a Yesh Atid statement. They were expected to hold further talks in the coming days. 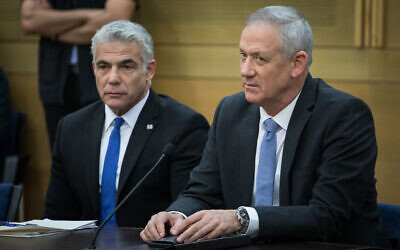 Then Blue and White leaders Benny Gantz (right) and Yair Lapid during a faction meeting at the Knesset on November 18, 2019. (Hadas Parush/Flash90)

The two were political allies in Blue and White but had a bitter falling out last year when Gantz decided to join Netanyahu in a unity government, citing a need for a functioning government during the pandemic, but breaking his central campaign pledge. Lapid went to the opposition.

Sunday’s meeting was their first since the acrimonious split.

Gantz on Monday sent out a call to Lapid, Sa’ar and Bennett, telling them the four had to meet together and find a way to form a new government without Netanyahu. “I called on the leaders of the change bloc to sit [together] as soon as possible, so that we can establish an honest government and stop Netanyahu’s rule,” Gantz said.

Lapid, Sa’ar and Bennett on Monday night had yet to respond to Gantz’s call, Channel 12 reported.

On the other side of the aisle, further dampening Netanyahu’s prospects, half of the ultra-Orthodox United Torah Judaism party, long a staunch ally of the prime minister, has reportedly refused to declare its support for him.

Netanyahu turned to Moshe Gafni, leader of the Degel HaTorah faction in UTJ on Sunday, and asked for his backing, but Gafni replied that he needed “time to think,” the Kan public broadcaster reported. 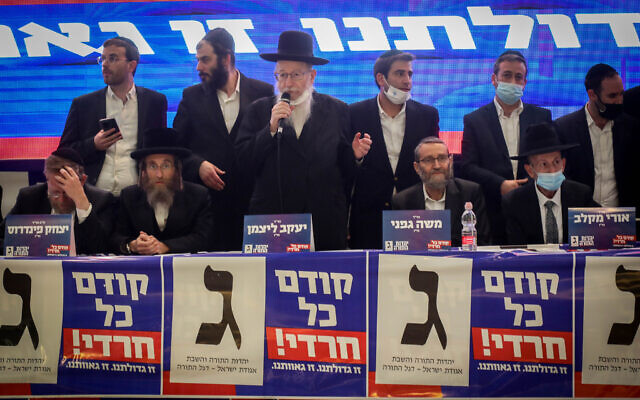 Still, MK Yaakov Litzman, who leads UTJ’s Agudat Yisrael faction, noted that his party ad “informed the public before the election that we will go with Netanyahu, so there is no question here.”

He added that his party’s goal is to “establish a right-wing coalition for all Israeli citizens. Everything else is spin.”

Neither the pro- nor anti-Netanyahu blocs have a clear path to forming a majority coalition after Tuesday’s vote, the fourth national election in two years. However, the prospect of a fifth election has spurred speculation that unlikely bedfellows could come together in an effort to oust Netanyahu or to enable him to retain power.