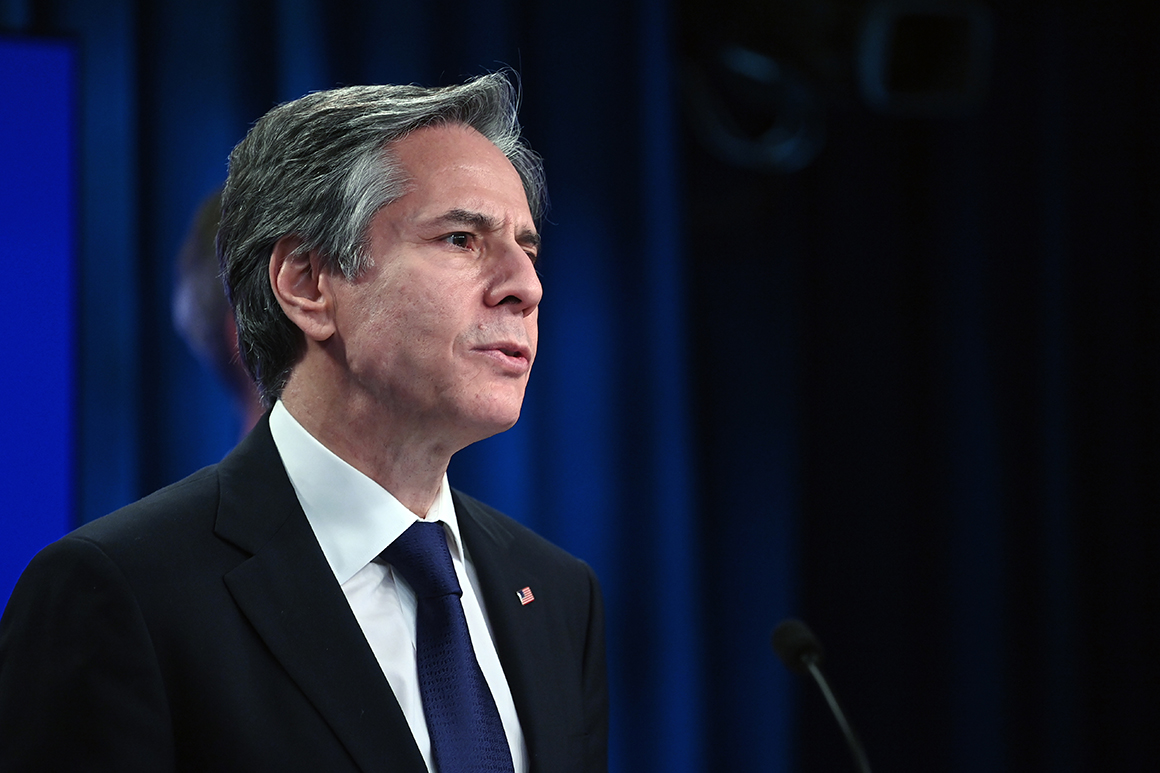 Many human rights scholars chided Pompeo, saying that having a hierarchy of rights could ultimately lead to efforts to erode the rights of certain groups, like women and LGBTQI people, by saying they simply mattered less.

Blinken agreed with that critique, saying that human rights are interdependent. One needs freedom of assembly, for example, to be able to organize a union, he said.

The State Department’s yearly Human Rights Report has long been considered a valuable resource for activists, lawyers, historians and others, including members of Congress, which sets the foreign affairs budget.

The newest one covers 2020 and — once a promised addendum on women’s reproductive rights is issued — will differ in both subtle and overt ways from versions published under then-President Donald Trump.

Here are some highlights:

Perhaps the biggest difference between the 2020 report and those before it is the presence throughout its pages of the Covid-19 pandemic.

In his cover statement, Blinken wrote that “some governments used the crisis as a pretext to restrict rights and consolidate authoritarian rule,” and that “women and children faced heightened risk as the prevalence of gender-based and domestic violence increased due to lockdowns and the loss of traditional social protections.”

In Brazil, for instance, some civil society sources reported that “LGBTI workers, who were more likely to work in the informal economy, lost their jobs at a much higher rate than the general population during the pandemic.”

In Italy, the report states: “The suspension of family visits enacted as part of the government’s response to the Covid-19 pandemic initially triggered prison riots. Between March 7 and April 20, approximately 10,000 inmates rioted in 49 of the 194 detention centers countrywide, resulting in the death of 13 detainees.”

Had Trump stayed in power, there’s no question the report would have included mentions of the pandemic. But given the former president’s efforts to downplay the severity of the crisis, it’s hard to say to what degree the department would have emphasized it.

In a bow to conservatives worried about potential support for abortion abroad, the Trump team limited the information about women’s reproductive rights that was catalogued and released in the annual report.

Instead, it included a section titled “coercion in population control.” That section largely covered topics such as whether people faced forced abortions or sterilizations in other countries.

Because the new report is about 2020 and most of the work on it was done before Joe Biden became president, for now, the sections on “coercion in population control” were left in. The Biden administration announced, though, that later this year it would release an addendum to the report that delves into “a broader range of issues related to reproductive rights.”

“The addendum will cover maternal health issues such as maternal mortality, government policy adversely affecting access to contraception, access to skilled healthcare during pregnancy and childbirth, access to emergency healthcare, and discrimination against women in accessing sexual and reproductive health care, including for sexually transmitted infections,” the report states. “These topics were included in previous Country Reports on Human Rights Practices, and they will be included again in future years.”

Israel and the Palestinians

Trump heavily favored the Israelis in the long-running Mideast conflict. He recognized Jerusalem as Israel’s capital; cut off aid to the Palestinians; and, among other things, reversed a longstanding U.S. position that Israeli settlements in land claimed by Palestinians were inconsistent with international law.

A newsletter from POLITICO that unpacks essential global news, trends, and decisions.

In the Human Rights Report, the Trump administration also largely erased mentions of the West Bank and Gaza as being “occupied” by Israel.

The report under Biden, however, states that it covers “the West Bank, Gaza, and East Jerusalem territories that Israel occupied during the June 1967 war.” But it doesn’t go so far as past versions of the report whose section on that part of the world was titled “Israel and the Occupied Territories.”

On a conference call after the report’s release, POLITICO asked if the Biden administration believes Israel occupies the West Bank. State Department officials sidestepped the question, saying that the terms used in the report were meant to be about geography, not to convey a position on “final status” issues involving potential peace talks between Israel and the Palestinians.

This year’s Human Rights Report flat out states: “Genocide and crimes against humanity occurred during the year against the predominantly Muslim Uyghurs and other ethnic and religious minority groups in Xinjiang.”

That assertion reflects Pompeo’s last-minute determination that the Chinese Communist Party has carried out such atrocities and the Biden administration’s agreement with that determination.

The declaration in the report is not unexpected, but it will no doubt further strain the U.S.-Chinese relationship, and Chinese officials, as they have before, are sure to respond with furious words.

It’s not the first such report from China, and it probably won’t be the last.

Blinken took a swipe at Pompeo’s efforts to craft a hierarchy of rights in his cover statement on this year’s report, stating: “Human rights are interdependent, and the deprivation of one right can cause the broader fabric of a society to fray.”

During the news conference Blinken held Tuesday, he stressed that the Biden administration opposes the “unbalanced views” of Pompeo’s Commission on Unalienable Rights and that its findings will not be a “guiding” standard.

Blinken insisted that it was important that America be consistent. “Standing up for human rights everywhere is in America’s interest,” he said.