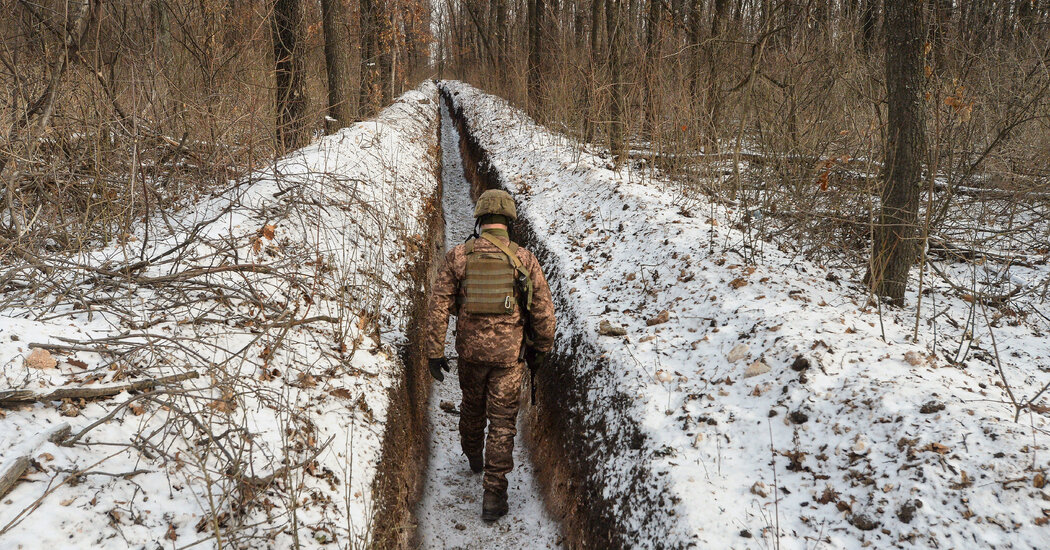 MOSCOW — The war in eastern Ukraine, which has been on a low simmer for months, drawing little international attention, has escalated sharply in recent days, according to statements Tuesday from the Ukrainian and Russian governments.

In the deadliest engagement so far this year, four Ukrainian soldiers were killed and another seriously wounded in a battle against Russian-backed separatists in the Donetsk Region of eastern Ukraine, the country’s military said.

The soldiers’ deaths, along with a buildup of Russian forces on the border, has seized the attention of senior American officials in Europe and Washington. In the past week, the U.S. military’s European Command raised its watch level from possible crisis to potential imminent crisis — the highest level — in response to the deployment of the additional Russian troops.

The exchange of artillery and machine-gun fire in the Donetsk Region was unusual in that it lasted most of a day. Fighting across the so-called Line of Contact, a roughly 250-mile-long barricade of trenches and fortifications, are typically briefer.

But it was not the only sign of tensions in a region where Ukrainian and the Russian-backed separatist forces have settled into trenches that have barely moved over the seven years since fighting erupted in 2014.

European monitors have spotted new weaponry on the Russian-backed side in recent weeks. Artillery fire has become more frequent. And Russian negotiators have warned of a breakdown in peace talks that have been dragging on for years.

On Tuesday, the Kremlin spokesman, Dmitri S. Peskov, acknowledged the recent increase in fighting and said Russia “sincerely hoped” it would not escalate. The fighting, he said, is “canceling out the modest achievements made earlier.”

In Ukraine, Parliament on Tuesday approved a statement declaring an “escalation” along the front, essentially acknowledging that a cease-fire negotiated in July had broken down. It pointed to a “significant increase in shelling and armed provocations by the armed forces of the Russian Federation.”

The statement called on Western governments to “continue and increase international political and economic pressure on Russia,” something Ukraine has been requesting for years. The United States and European allies have imposed financial sanctions on Russia, targeting President Vladimir V. Putin’s inner circle, banks and oil companies.

Some officials believe Russia is mostly engaging in saber rattling, and is not eager to renew its offensive. Others are more worried, believing that Mr. Putin’s intentions are not clear and that an operation meant to test a new president could quickly escalate into something more ominous.

This week, Gen. Tod D. Wolters, the head of U.S. European Command, raised the American military’s watch level for the second time in several days after Russian troops failed to leave Ukraine’s border region. American strategists had expected the troops to depart the area, about 30 miles from Ukraine’s border, after the conclusion of a military exercise March 23.

American estimates of how many additional Russian troops had been sent to the border have varied. One official said there were roughly 4,000.

Since Russia’s invasion of Crimea in 2014, fighting between Russian-backed separatists and Ukrainian forces has periodically flared. Since then, Mr. Putin has not been afraid to use military exercises near Ukraine’s borders or deployments of troops to send messages to both Kyiv and the West, American officials said.

The latest violence in eastern Ukraine and the troop buildup could well be a way for Moscow to measure the Biden administration’s commitment to Ukraine, according to current and former officials.

“This could be posturing, but the Kremlin is testing the new administration,” said Frederick B. Hodges, a retired lieutenant general and a former top U.S. Army commander in Europe.

Russia has “zero interest” in a real peace for Ukraine, and wants to keep the country as destabilized as possible, said General Hodges, who is now with the Center for European Policy Analysis.

In a January call with Mr. Putin, President Biden focused on the importance of Ukrainian sovereignty. But since then, Mr. Biden has not scheduled a call with President Volodymyr Zelensky of Ukraine, raising questions among some former officials about how serious the new administration is about resolving the conflict there.

Still, with tensions rising, the Biden administration has begun to respond. Jake Sullivan, the national security adviser, on Monday spoke to Andriy Yermak, a top adviser to Mr. Zelensky, a call announced by the White House.

Russia supports the separatists with sophisticated weaponry, ammunition and soldiers, according to Western governments, though Moscow has denied doing so.

And despite the static state of the war, the Line of Contact remains a potential flash point for Russia’s relations with the West. Because it divides villages and towns in eastern Ukraine by East-West politics rather than any significant ethnic or sectarian divide, the Line of Contact is sometimes called a new Berlin Wall.

Representatives of Ukraine, Russia and the Organization for Security and Cooperation in Europe negotiated the cease-fire in July, and it had held longer than dozens of others reached over the past seven years. Eight cease-fires have broken down since 2018 alone.

Tensions between Russia and Ukraine have also escalated along the de facto border between the two countries at the isthmus of the Crimean Peninsula, which is to the south and west of the Line of Contact, and which was annexed by Russian forces in 2014.

In February, the Russian military announced rehearsals of paratrooper drops in Crimea that commentators in Russia and Ukraine saw as possibly telegraphing a fresh Russian incursion. The target this time: water canals supplying Crimea from the Dnieper River in Ukraine.

Ukraine cut off the supply of water from the river when Russia annexed the peninsula. Since then, water has been so scarce that a majority of residents in Crimea do not have round-the-clock supplies, according to the Interfax news agency. Most towns ration supplies by turning off water mains except for brief windows in the mornings and evenings.

The Russian military described the exercise with 3,000 paratroopers as practicing “seizure of the enemies’ objects with subsequent defense until uniting with the main force.” It did not mention water canals. The exercise also involved practice marine landings by the Black Sea Fleet.

In response, the Ukrainian military announced an exercise rehearsing the defense of the flatlands between Crimea and the river against air or sea attacks, further ratcheting up tensions.