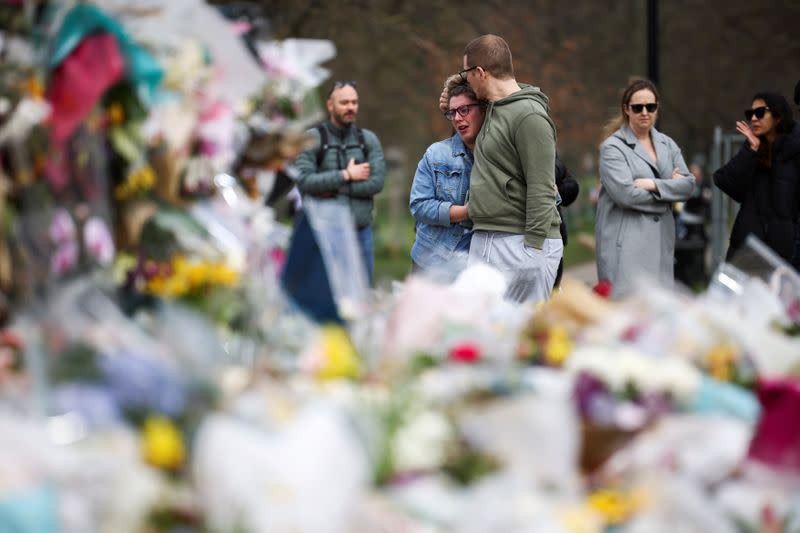 LONDON (Reuters) -London police acted appropriately at a vigil to a murdered woman earlier this month, an independent watchdog said on Tuesday, after the force was criticised for a heavy-handed approach which saw mourners dragged away by officers.

The murder of Sarah Everard, 33, sparked a huge outpouring of grief and dismay in Britain at the failure of police and wider society to tackle violence against women.

At a vigil in her memory, which police said broke COVID-19 lockdown rules, officers faced accusations of acting with undue force after a number of women were pinned down and then dragged away in handcuffs after the crowd refused orders to disperse.

Her Majesty’s Inspectorate of Constabulary (HMIC) carried out an investigation into what happened and cleared the Metropolitan Police (Met) of any wrongdoing.

“After reviewing a huge body of evidence – rather than a snapshot on social media – we found that there are some things the Met could have done better, but we saw nothing to suggest police officers acted in anything but a measured and proportionate way in challenging circumstances,” said Matt Parr, Her Majesty’s Inspector of Constabulary.

The HMIC said the media coverage of the incident, which saw images of arrested women being beamed across the world, “had led to what many will conclude was a public relations disaster” for the police.

But it said officers had done their best to end the event peacefully, despite “some extreme and abhorrent abuse”, and there was “nothing to suggest that officers acted inappropriately or in a heavy-handed manner”.

Everard was abducted as she walked home in south London and a serving police officer has been charged with her kidnap and murder.

Hundreds of people, mostly women, had gathered on March 13 at Clapham Common, close to where Everard was last seen alive to pay their respects, including Kate, the Duchess of Cambridge and wife of Queen Elizabeth’s grandson Prince William.

However, scuffles later broke out when officers took action to bring the event to a close.

In the aftermath, there were calls for the Met’s chief Cressida Dick to resign, while London Mayor Sadiq Khan – who is responsible for policing in the city – said the officers’ response “was at times neither appropriate or proportionate”.

The HMIC said such condemnation from public figures “showed a lack of respect for public servants facing a complex situation, and undermined public confidence in policing,” but added “a more conciliatory response after the event might have served the Met’s interests better”.