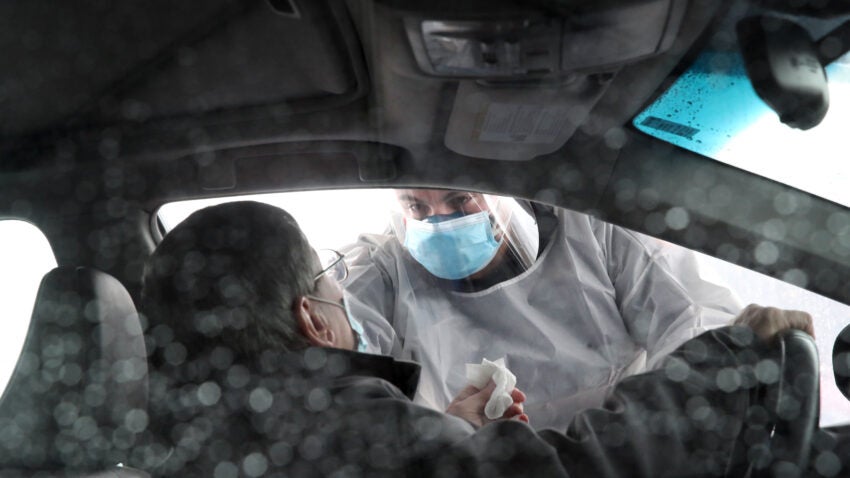 Local public health experts are sounding the alarm about the potential for another surge as COVID-19 cases rise again in the United States.

After seeing weeks of a steady decline in cases, followed by a plateau, the country averaged 61,545 new cases last week, up 11 percent from the average two weeks prior, according to The New York Times. The increase comes as experts have been warning for months that increased circulation of more infectious variants of the virus could drive up cases, hospitalizations, and deaths.

Physicians and doctors have framed the effort to head off such a surge as a “race” between the spread of the variants and the effort to get as many Americans vaccinated as quickly as possible.

Dr. Ashish Jha, dean of the Brown University School of Public Health, wrote on Twitter that even with the “phenomenal” vaccination rates, the variants have pulled ahead in the race between the two.

“Infections up in 34 states,” he wrote. “Test positivity up in 38. Hospitalizations up in 20. Holding tight until more folks vaccinated key to winning this race.”

Jha said he still believes the United States can “win” the face-off between the variants and the vaccine rollout. But the the public and leaders need to keep asking a question as the effort continues.

“How many folks do we tolerate getting COVID, dying in final weeks before vaccinations get us to a better place?” he wrote. “I get it can’t be zero. But it has to be less than 55K daily infections, 1000 daily deaths we’re at now.”

We will win this race

But question we need to ask ourselves:

How many folks do we tolerate getting COVID, dying in final weeks before vaccinations get us to a better place?

I get it can’t be zero

But it has to be less than 55K daily infections, 1000 daily deaths we’re at now

Dr. Anthony Fauci told CBS over the weekend the rise in the coronavirus isn’t just because of the more transmissible variants.

The director of the National Institute of Allergy and Infectious Diseases at NIH and top adviser to President Joe Biden told the network the increase is also due to “premature” reopenings, with states lifting restrictions including mask mandates, and more Americans traveling for spring break.

Dr. Megan Ranney, an emergency room physician and director of the Brown Lifespan Center for Digital Health, raised similar concerns about the pace of reopenings in an interview with CNN on Saturday. The doctor said she’s still seeing people really sick with COVID-19 during her emergency room shifts.

“And of course the folks that come to the ER, they’re just the tip of the iceberg,” Ranney said. “None of the people who I admitted to the hospital or to the ICU had been vaccinated. I want to get back to normal just as much as anyone. And the data suggests that if two people are vaccinated, it is safe for them to be around each other. The chance of them getting sick, the chance of them giving the virus to each other is really low. But right now, when so few people in the U.S. have been vaccinated, putting large groups of people together in an indoor space is simply not safe.”

Folks. We are making incredible progress on #covid19 vaccines but we haven’t hit herd immunity yet – ! I share with ⁦⁦@NewDay⁩ a story about why we need to be a little bit careful, a little longer: pic.twitter.com/PC58WHuDF6

Last week, Massachusetts moved into the first step of the final phase of its reopening plan, which allows indoor and outdoor stadiums — such as TD Garden and Fenway Park in Boston — to reopen under a 12 percent capacity limit. Gov. Charlie Baker allowed the step to begin despite pushback from a coalition of community and health groups urging him to reconsider.

“In short, many of us are concerned,” Dr. Abraar Karan, a physician at Brigham and Women’s Hospital, wrote of the trends being seen in Massachusetts and elsewhere in the nation.

As has been seen at other points during the pandemic, once an increase is detected it is likely that there are many more cases that are occurring and going undetected, the doctor wrote. Increases in cases are followed after a short delay by a rise in hospitalizations, which is also beginning to emerge, he wrote.

“While we are vaccinating fast, some states much faster/more efficiently than others, at this point — vaccinating alone without any other preventative measures will likely not prevent another surge in my opinion,” Karan wrote. “Weather getting better in many places – we should take advantage. Let this conversation not digress into lockdowns [versus] no lockdowns; there is a lot in between. Avoid large indoor crowded poorly ventilated spaces if you/your loved ones are not vaccinated, [especially] if you have high risk people in your circles who are not vaccinated yet.”

Like Jha, the Brigham and Women’s doctor said he is optimistic with the pace of vaccinations. But efforts to prevent the spread must remain top of mind, including wearing masks in public spaces and opting for a high-filtration mask if you can.

2/ Seroprevalence studies also indicate that we are under-detecting cases based on discordance b/w rtPCR and antibody studies; these numbers have varied at different time points in the year- all the way up to 10x by some measures at some time points #covid19

4/ As we have seen many times, once you start to see reversal in trends, you likely have many more cases that are happening & going undetected still (‘tip of the iceberg’); the infections you detect now likely happened a week or so ago depending on sx onset–>test interval

6/ While we are vaccinating fast, some states much faster/more efficiently than others, at this point- vaccinating alone without any other preventative measures will likely not prevent another surge in my opinion. Weather getting better in many places- we should take advantage

8/ Keep up masking esp in indoor crowded spaces in public; this is a very low hanging fruit; this won’t be forever, but we need to bolster our vaccination efforts with all of our other prevention measures. Cloth+ surgical; or high filtration if you have ithttps://t.co/Lz6uf1lI0z pic.twitter.com/7lR0P0ZDnb

10/ We have evidence in the real world that vaccines work extremely well; in medical centers, nursing homes, in countries like Israel that are far ahead of the pack.

Sign up and receive coronavirus news and breaking updates, from our newsroom to your inbox.

Sorgente articolo:
‘Many of us are concerned’: Public health experts issue warnings of another surge as COVID-19 cases tick up – Boston.com