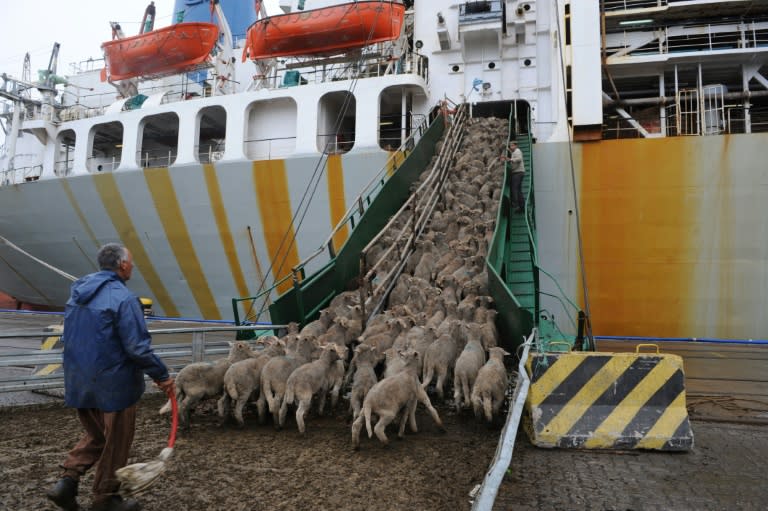 The blockage of the Suez Canal has cast a light on a very delicate kind of cargo: The millions of livestock shipped each year in conditions denounced by animal rights groups.

Countries from Australia to Romania and Uruguay export live animals in long voyages across the world.

The journey can be deadly at times, with thousands of cattle and sheep perishing at sea in recent years.

While Egypt’s Suez Canal was finally reopened to traffic on Monday, concern was running high in Romania about 130,000 sheep whose shipment had been considerably delayed by the container ship Ever Given as it blocked the waterway for nearly a week.

“Every hour counts for the sheep and the fatality rate will only grow,” warned Gabi Paun, EU director of Animals International.

Eleven Romanian ships were delayed and it’s all but certain that their food supplies have run out, he said.

“Even if the law was respected and the ships were carrying 25 percent more food … it would nonetheless have been finished by now,” Paun said.

Mary Pana, the head of Romania’s main association of livestock farmers and exporters, Acebop, said the nation has been sending 50,000 sheep a week to Middle East nations such as Saudi Arabia and Jordan ahead of Ramadan.

Deadly incidents have put a spotlight on the risks, including a recent one.

Last week, Spanish authorities ordered 1,600 cattle en route to Turkey be put down after officials there refused to let the herd disembark because they feared an outbreak of blue tongue disease onboard.

The cattle had already spent three months at sea.

In November 2019, a cargo vessel carrying 14,600 sheep capsized in the Black Sea after leaving from Romania. Some 180 of the animals were rescued. Those that didn’t drown or were crushed to death died of thirst.

Romania has been criticised in the past for transporting animals by sea in the summer heat. In 2015, thousands of sheep bound for Jordan died from thirst and the intense heat.

In 2009, a ship carrying some 30,000 sheep and cattle from Uruguay sank in the Mediterranean before reaching its destination in Syria. Dozens of crew members were also left dead or missing.

Australia passed reforms to its live export trade in 2018 after video released by animal rights activists showed sheep — some already dead — crammed together in small, stifling pens and covered in excrement on ships heading to the Middle East.

More than 2.8 million live cattle, sheep and goats were exported in 2018 from the EU to Mediterranean basin countries, with Romania accounting for more than half.

The activist group Compassion in World Farming (CIWF) has complained for years about violations of regulations it judges insufficient.

A big problem is the poor design, construction and maintenance of the transport ships, according to Agathe Gignoux, the head of advocacy at the NGO’s French branch.

She pointed to “very steep ramps, and very low ceilings and stalls” that made it harder to feed and water the animals.

In general, Gignoux added, the ships are often old and “were not built to transport animals”.

The European Commission report said the ships were originally designed to carry automobiles.

What’s worse, Gignoux said, is that “there is no veterinary care on board” even though trips can last five to eight days on average.

The EU commission pointed out that some trips last several weeks.

CIWF says the reason why animals are transported alive does not stem from problems of conservation or the need for ritual slaughter for clients in the Middle East.

“Honestly, the real reason is simple, it costs more to slaughter livestock in Europe,” Gignoux said.

In June, the European Parliament called attention to allegations that EU laws on live animal transport were being violated and created a commission to study the situation.