Some of the very last Jews in Yemen were recently driven out of their homes by Houthi rebels and were to be taken to another country, the London-based Asharq Al-Awsat newspaper reported.

Thirteen members of three different families left their homes in Sana’a, a region of the country held by the Iran-backed Houthi forces, and went to a UN refugee agency, the Sunday report said.

They reportedly agreed to leave as part of a deal to gain the freedom of Levi Salem Marhabi, a Jewish man held by the Houthis for six years.

“They gave us a choice between staying in the midst of harassment and keeping Salem a prisoner or leaving and having him released,” one of the expelled family members told the newspaper.

“History will remember us as the last of Yemeni Jews who were still clinging to their homeland until the last moment,” the person said. “We had rejected many temptations time and time again, and refused to leave our homeland, but today we are forced.”

Though the report said the Jewish families were refusing to go to Israel, the Kan public broadcaster reported Monday that they had already arrived in another unspecified country and efforts were being made to bring them to the Jewish state.

Marhabi was arrested in 2016 by Houthi intelligence forces after a rare deer-skin Torah scroll was smuggled out of Yemen to Israel, along with 17 members of the Jewish community.

The Jewish emigrants and the Torah scroll were given a warm welcome in Israel, including by Prime Minister Benjamin Netanyahu. 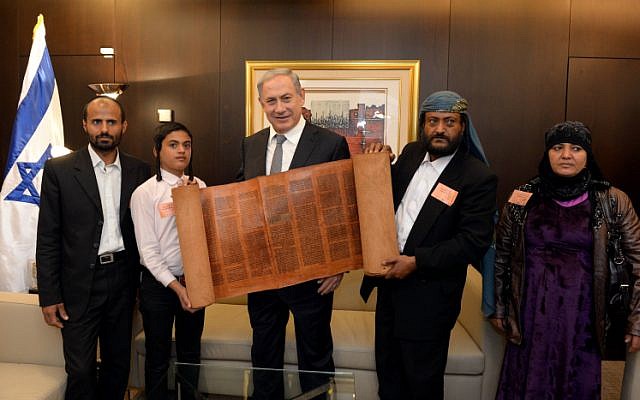 Prime Minister Benjamin Netanyahu holds a 500-year-old Torah scroll as he poses with some of the Yemenite Jews who were brought to Israel as part of a secret rescue operation, at the Knesset, on March 21, 2016. (Haim Zach/GPO/File)

Marhabi, an Orthodox man, was detained by police after images of the scroll were widely circulated online, Britain’s Jewish Chronicle reported at the time. The Houthis said the scroll, believed to be at least 500-years-old, was a national artifact.

It is unclear how many Jews remain in Yemen today. In 2017, the country’s information minister said his government was unaware of the fate of the country’s few dozen remaining Jews, most of whom reside in the Houthi-controlled capital of Sana’a.

The Houthis, who are aligned with Iran, view the tiny remaining Jewish population as an enemy and are engaged in a campaign of ethnic cleansing that includes ridding Yemen of its Jewish community, he said at the time.

According to the Asharq Al-Awsat report, there are now just four Jews left in Yemen, all of whom are senior citizens.

Some 49,000 Yemeni Jews were brought to the nascent State of Israel in Operation Magic Carpet in 1949-50.