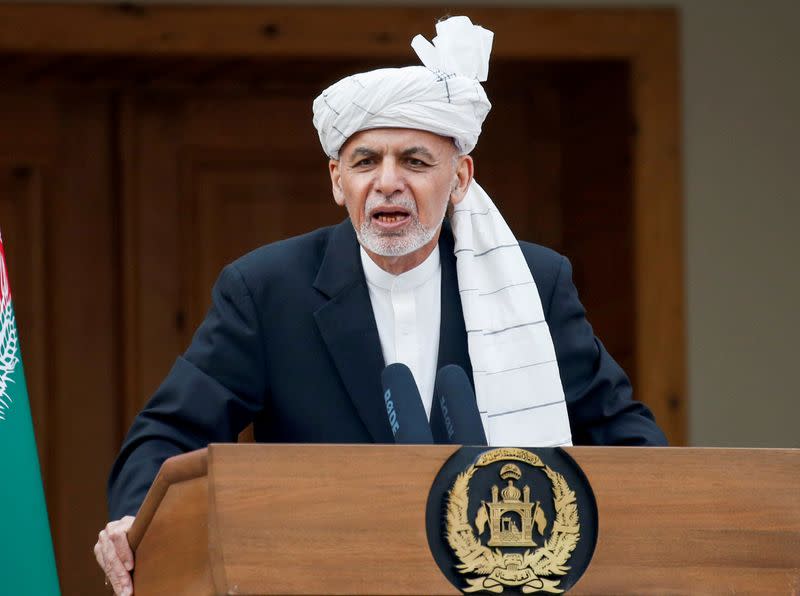 KABUL/ISLAMABAD (Reuters) – Afghan President Ashraf Ghani outlined his plans for peace at a regional summit in Tajikistan on Tuesday, saying that he would step aside if an election was held.

The ninth Heart of Asia summit, aimed at promoting peace and security in Afghanistan, this year comes at a sensitive time as the United States and other powers attempt to jumpstart the peace process with a proposal for a new transitional government.

Ghani has resisted the proposal, saying elections must take place before he will step aside.

“I … strongly support holding elections at the earliest possible time,” Ghani said at the conference in Dushanbe. “My greatest honour will be to hand over authority to my elected successor.”

Reuters reported last week that Ghani would propose new presidential elections within six months under a plan he intended to put forward as a counter-offer to the U.S. proposal that he rejects, according to two government officials.

Ghani, who took office in 2014 and was sworn in for a second five-year term last year, added details on Tuesday, saying that once a political settlement was reached, it should be endorsed by an Afghan assembly known as a loya jirga and followed by a ceasefire with international monitoring.

The Taliban have so far rejected a ceasefire and said they would not directly join an interim government.

Tuesday’s conference was one in a series of high-profile meetings on Afghanistan as Washington reviews its plans for the peace process. Violence has risen while progress stalls at peace negotiations in Doha.

Earlier in the month, major regional players met with Afghan political and government leaders as well as Taliban negotiators in Moscow. Washington is preparing for a conference it has asked the United Nations to hold soon in Turkey, though the date has not been announced.

(Reporting by Charlotte Greenfield in Islamabad and Abdul Qadir Sediqi in Kabul; Editing by Raissa Kasolowsky)