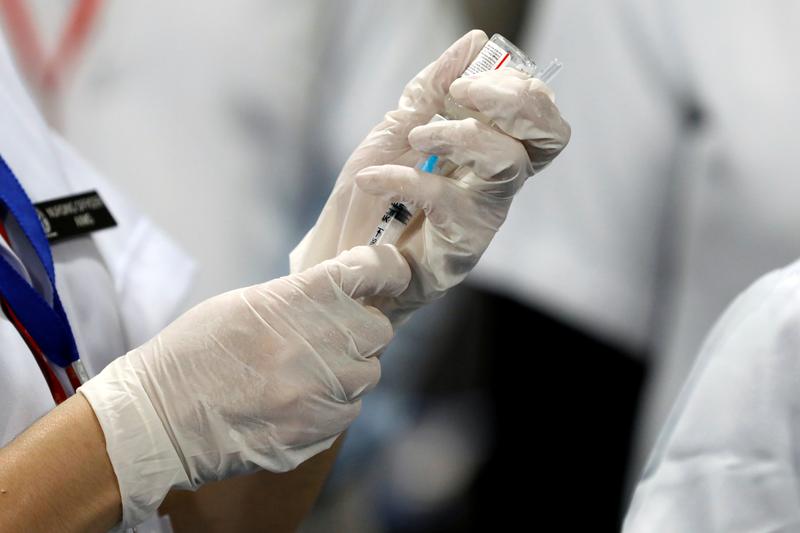 RIO DE JANEIRO (Reuters) -Brazil’s President Jair Bolsonaro on Tuesday signed an executive order to disburse 5.3 billion reais ($918.08 million) in new loans to fight the COVID-19 pandemic, as the country hit a record tally of 3,780 deaths in the past day.

Brazil currently accounts for about a quarter of COVID-19 daily deaths worldwide, more than any other country, and its vaccination efforts have been hampered by a lack of shots.

Bolsonaro has been widely condemned for his handling of the pandemic, from playing down the severity of the disease, to criticizing early efforts to secure vaccines and opposing social distancing measures. (Graphic: tmsnrt.rs/34pvUyi)

The new loans will be used to prop up Brazil’s health system, the finance ministry said. The health ministry will receive the funding and said it will use it at over 2,600 public health clinics, as well as to build more hospital beds.

On Tuesday, older Brazilians in Rio de Janeiro state waited in long lines under the strong sun to get vaccinated. While Brazil hoped to have 46 million doses of the vaccine in March, it ended up receiving only 22 million.

“After all this sacrifice, in this sun, we will see if we can get (the vaccine), but it looks unlikely, it is very disorganized,” said Ira Salazar, a retiree who was at the back of a line with more than 100 people.

The Brazilian government signed a contract last month to buy 20 million doses of Covaxin. Bharat Biotech had applied for emergency use of the vaccine in Brazil on March 8.

Bharat and its Brazilian partner Precisa Medicamentos said in a statement that they would appeal the decision and would present evidence that it is complying with all requirements.

Covaxin has been approved for use in five countries, including India, the statement said.