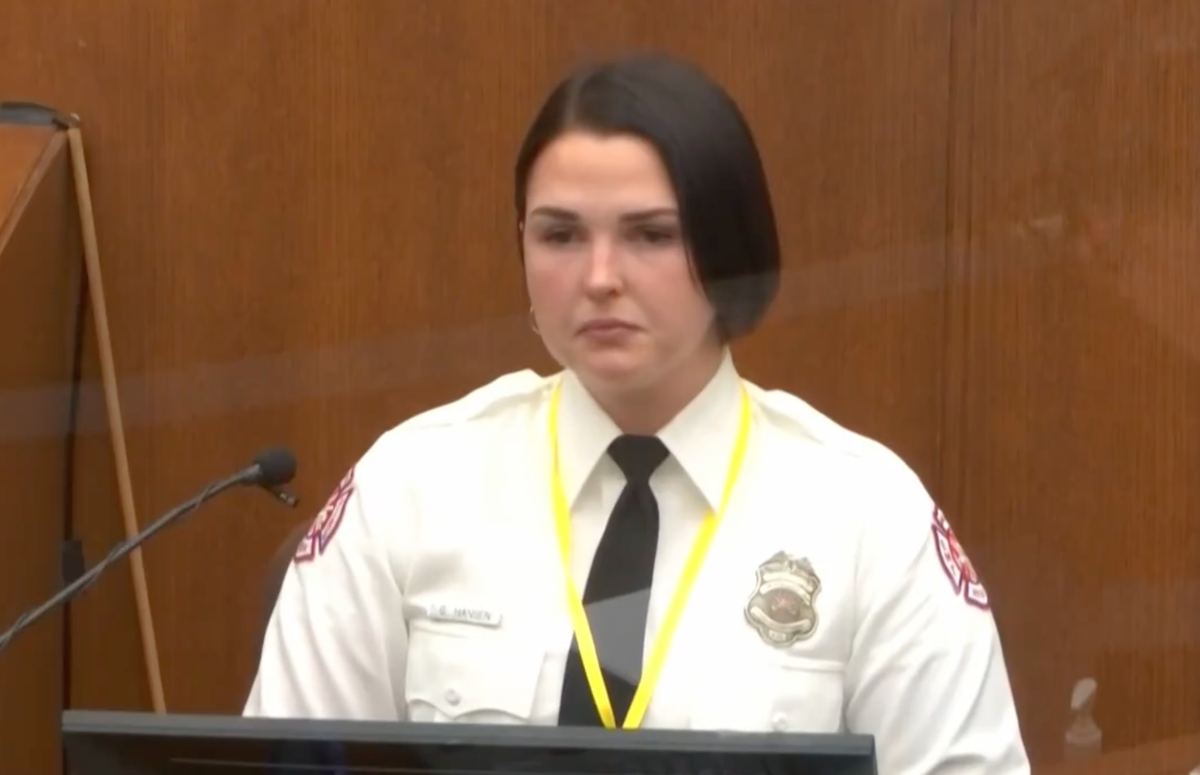 An off-duty firefighter called 911 when police refused to let her treat George Floyd and worried about the safety of Black witnesses, a murder trial heard.

Firefighter Genevieve Hansen, 27, told a court that she was “desperate” to check Mr Floyd’s pulse but was denied access by the officers detaining him.

She was speaking on the second day of the murder trial of Derek Chauvin, one of four former Minneapolis police officers accused of murdering Mr Floyd while arresting him on 25 May, 2020. His death sparked protests in favour of racial justice around the world.

Ms Hansen emotionally described how she begged the officers to check for signs of life and that after Mr Floyd’s limp body was loaded into an ambulance she called 911 to report what she had seen.

“There was a man being killed, and had I had access to a call similar to that I would have been able to provide medical attention to the best of my abilities and this human was denied that right,” she told the court.

“I think it all settled in that I wished I had called 911 immediately, it was ridiculous that Fire Station 17 was as close as it was and they hadn’t been there.

“I should have called 911 immediately but didn’t. When things calmed down I realised I wanted them to know what was going on and to basically report it.”

She asked to be transferred to a supervisor but the call ended quickly as “there was a lot going on.”

“I was still worried about the witnesses on scene, particularly as they were people of colour and Black men. I was worried for their safety as the officers were still on scene,” she admitted,

Ms Hansen told the court that she was an EMT certified firefighter, and had been on a walk on a day off when she came across the incident.

She said she was “concerned to see a handcuffed man who was not moving with officers with their whole body weight on his back and a crowd that was stressed out.”

Ms Hansen then said Officer Tou Thao had been “demanding” that she remained on the sidewalk and started to record the scene with her phone. She said she recognised Mr Chauvin’s face from a previous call they had both attended but did not know him.

“I noticed they were leaning over his body, it appeared to be the majority of their weight on Mr Floyd. I remember seeing four on his body, we know now it was three,” she said.

“He was not moving and he was cuffed and three grown men is a lot of weight to put on somebody, too much.”

She described Mr Floyd has having a “puffy and swollen” face and was concerned about fluid leaking out of his body.

She then said she had “assessed his alternative level of consciousness” and needed to know if Mr Floyd still had a pulse.

And she said that Mr Chauvin seemed “very comfortable” with his weight on Mr Floyd.

“In my memory he had his hand in his pocket he looked so comfortable,” she said.

Ms Hansen said she then identified herself to Officer Thao, but told the court that the policeman told her that “if you really are a Minneapolis firefighter you would know better than to get involved.”

“I was worried he would not believe me and would not let me help, and that is not right, that is exactly what I should have done,” she said.

“Had they let me into the scene I already had decided what his level of consciousness was and I would have requested additional help and wanted someone to call 911 to get the paramedics and firefighters to come.”

She then detailed the life-saving measures she would have employed, including CPR, but added that she was unable “because the officers did not let me into the scene”.

“I also offered to walk them through it and told them if he didn’t have a pulse they needed to start compressions but that wasn’t done either. It is what I would have done for anybody,” she said.

“It made me feel totally distressed. I was pretty focussed on getting the officers to let me help. I tried different tactics of calm and reasoning and tried to be assertive. I pled and was desperate.”

She said eventually she raised her voice and swore at the officers. “I was desperate to help and was not getting what I needed to do in gaining access,” she said.

She added that she never saw the officers take Mr Floyd’s pulse.

Prosecutors then asked why she had decided to record the scene on her phone. “I’m not sure why I did it, it was an instinct,” she said.

Under cross-examination Mr Chauvin’s defence lawyer, Eric Nelson, asked Ms Hansen if the crowd had been “upset or angry”.

“I don’t know if you’ve seen anybody be killed, but it’s upsetting,” she replied before being admonished by the judge for her answer.

Earlier a teenage witness told the court that Mr Chauvin brandished mace at her as he knelt on Mr Floyd.

Kaylynn Gilbert said that she had been “scared” by Mr Chauvin who she described as “kind of angry” as he manhandled him.

The 17-year-old high school student told the jury in Minneapolis that she had given her phone to a friend to record the events because of a “gut feeling” that something was wrong.

She then went on to describe the police officers at the scene outside Cup Foods as“really hostile.”

“The tone in their voices, Officer Thao’s voice, was really angry,” she said of the officer captured on video controlling the small crowd.

And she denied any of the witnesses had been violent towards the police.

She also described Mr Chauvin, who was “digging his knee into George Floyd’s neck” as “kind of angry.”

Ms Gilbert added that while he was pinning down Mr Floyd, Mr Chauvin had grabbed his mace and was “shaking it at us.”

Before that Darnella Frazier, 18, whose video of the killing went viral, told the court the impact it had had on her life.

“It’s been nights I stay up apologising and apologising to George Floyd for not doing more and not physically interacting and not saving his life.

Deciding the case is a jury of nine women and six men, with nine identified as white, four Black, and two of mixed race, ranging in age from 20s to 60s.