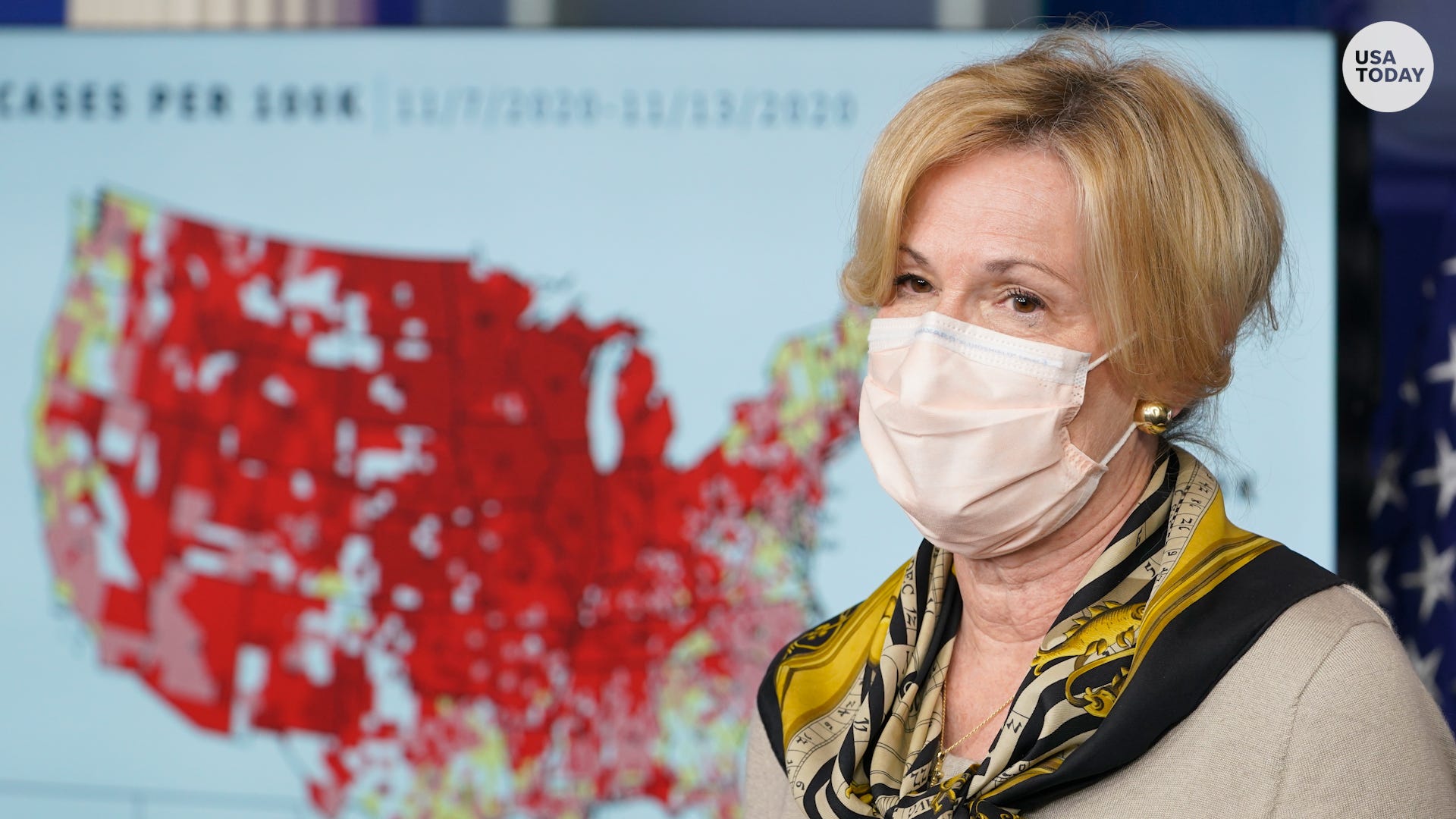 Deborah Birx: Most COVID-19 deaths in the US were avoidable

The former White House coronavirus response coordinator said later deaths could have been reduced with more social distancing and shutdowns.

Relatives and friends of Britons who lost their lives to the coronavirus are drawing thousands of hearts on a wall opposite the Parliament in London as a memorial to the 145,000 victims.

“Each heart represents someone who was loved. Someone who was lost too soon to Covid-19,” the organizers, Covid-19 Bereaved Families for Justice UK, said on their crowdfunder page. “As bereaved family and friends this is how we choose to remember.”

Each heart is being drawn by hand, and the National Covid #MemorialWall will have drawn more than 145,000 of them. The palm-sized hearts will cover a a 6-foot-tall wall the length of more than five football fields. Hearts will continue to be added until the pandemic ends and the deaths stop, the group says.

“Like the scale of our collective loss, this memorial is enormous,” he group said. “We hope everyone in the country will be part of this effort, and together we can share our grief through this overwhelming display of love.”

►Meanwhile, all 50 states have announced when they plan to open up coronavirus vaccinations to all adults. More than a dozen have already lifted restrictions.

Chicago announced the opening of a new vaccination site for union workers eligible for the shot under current restrictions.

►MGM Resorts International is bringing the coronavirus vaccine to employees at its casinos on the Las Vegas Strip.

►A coronavirus variant first identified in Britain has been found on the Navajo Nation.

📈 Today’s numbers: The U.S. has over 30.39 million confirmed coronavirus cases and more than 550,900 deaths, according to Johns Hopkins University data. The global totals: 128.15 million cases and 2.8 million deaths. More than 189.45 million vaccine doses have been distributed in the U.S. and 147.6 million have been administered, according to the CDC.

📘 What we’re reading: Those who experimented with gender identity behind masks and screens during the pandemic may soon be returning to the workplace as the rollout of vaccines ramps up and businesses reopen. But will workplaces be ready to provide a tolerant, safe environment for employees who now identify differently? Read the full story.

USA TODAY is tracking COVID-19 news. Keep refreshing this page for the latest updates. Want more? Sign up for our Coronavirus Watch newsletter for updates to your inbox and join our Facebook group.

The COVID-19 vaccine from drug company Pfizer and its German partner BioNTech vaccine is safe for and extremely effective in adolescents, according to a company-sponsored study released early Wednesday. In adolescents 12 to 15 years old, vaccination led to a higher protective antibody response than in adults and was seen to be 100% effective against symptomatic disease, the study of 2,260 adolescents found. The two-shot Pfizer-BioNTech vaccine had been authorized for use in those 16 and up based on previous trials, but not in younger adolescents.

Last week, the companies began testing their vaccine in children ages 5 to 11; next week, they will begin testing in ages 2 to 5, and later will look at children 6 months to 2 years.

The United States has reported more known coronavirus variants in the last week —nearly 4,300 — than it reported through the middle of March, a USA TODAY analysis of CDC data shows.

Tuesday night’s tally reflected more than 1,000 new cases just since Sunday’s report. The U.S. now has 12,053 known cases of variants that can spread COVID-19 more easily, dodge some treatments and immunities, or both.

Ohio reported its first two cases of the B.1.351 variant first seen in South Africa.

The majority of U.S. adults say that they’ve either being vaccinated for COVID-19 or intending to do so as soon as possible, and that number continues to rise. That’s according to a new survey from nonpartisan health foundation Kaiser Family Foundation, which puts that number at 61% of respondents while the share that responded said they’re taking a “wait and see” approach has shrunk to 17%.

The new developments come as average daily reported cases are up 10% compared to a week earlier, data from the Centers for Disease Control and Prevention shows. And as COVID-19 cases creep up again across the country, federal officials and epidemiologists say they’re worried we could hit another tipping point, leading to a fourth significant surge of infections, hospitalizations and deaths. Read more here.

The U.S. and a dozen other countries issued a rare joint statement on Tuesday questioning the validity of a World Health Organization study into the origins of the coronavirus, which was first detected in Wuhan, China, and has now killed 2.8 million people across the globe.

“We support a transparent and independent analysis and evaluation, free from interference and undue influence, of the origins of the COVID-19 pandemic. In this regard, we join in expressing shared concerns regarding the recent WHO-convened study in China,” reads the statement, which was issued by the U.S. State Department in coordination with a raft of other governments, including Australia, Canada, and the United Kingdom.

The statement included strong support for the WHO and did not directly blame China for interfering with the scientific probe. But it said health experts were delayed in studying the origins of the virus and that even when granted access, they were denied “complete, original data and samples.”

“The mission of the WHO is critical to advancing global health and health security,” the statement said. “Scientific missions like these should be able to do their work under conditions that produce independent and objective recommendations and findings.”

“I do not believe that this assessment was extensive enough,” he said. “Further data and studies will be needed to reach more robust conclusions.”