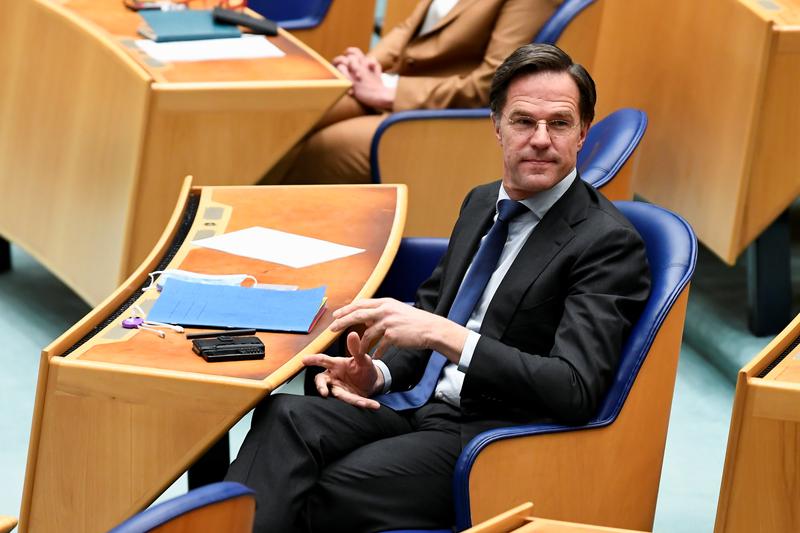 AMSTERDAM (Reuters) – Dutch opposition parties presented a no-confidence motion in caretaker Prime Minister Mark Rutte on Thursday and accused him of lying in public about what he had privately discussed during talks to form a Cabinet, presenting the biggest challenge to his leadership in a decade.

Rutte was the clear winner of March 17 parliamentary elections that were seen as a referendum on his handling of the coronavirus pandemic.

It would also throw negotiations on forming a coalition into disarray.

It was not clear whether centrist parties in Rutte’s previous coalition, which are likely to participate in any new coalition, would support him. A debate over the situation appeared likely to last into the early hours of Friday.

The crisis arose on Thursday after Rutte acknowledged having privately discussed what job should go to a prominent member of parliament who had been critical of his previous Cabinet. Rutte had previously said he did not do so.

“The only thing I can do here is say from the bottom of my heart, my toes, say what happened, what went well, what went wrong, that I never lied,” Rutte said in parliament on Thursday.

Rutte, a 54-year-old conservative who has been in office for more than 10 years, pointed to his record and said he hoped to continue leading the country.

Talks on forming a new government were abruptly put on hold on March 25 when one of the chief negotiators unwittingly revealed a sensitive document to a news photographer as she rushed out of parliament after learning that she had tested positive for the coronavirus.

The document showed that negotiators were discussing a position “elsewhere” for popular MP Pieter Omtzigt, a prominent critic of Rutte’s previous Cabinet, though Omtzigt’s Christian Democrats were part of the ruling coalition. The cryptic remark has been interpreted as implying outside parliament or outside the Netherlands.

Rutte told reporters on March 25 he had not been the one to mention Omtzigt’s position.

‘LIED TO THE WHOLE COUNTRY’

In Parliament on Thursday, Rutte told sceptical lawmakers that he had forgotten mentioning a Cabinet post for Omtzigt in a private conversation. He said he had not hinted at a position “elsewhere” during talks about the Cabinet, which he said meant he had technically not said anything untrue.

Opposition lawmaker Geert Wilders, who filed the no-confidence motion, said Rutte had “lied to the whole country”. “Seek a job elsewhere yourself,” Wilders said. “We cannot go further with this PM.”

Omtzigt, who was sworn in as a member of parliament on Wednesday, said the implication he should be removed was “an affront to the Dutch voter”.

He demanded full transparency about how his name had come to be on the document.

Rutte’s conservative VVD party convincingly won last month’s national elections, even though his government resigned in January over a scandal in which thousands of families where wrongfully accused of child care benefit fraud for years, often on the basis of ethnicity.

Omtzigt had persistently asked questions about the matter until it became fully public.

In his defence on Thursday Rutte appealed to his track record.

“I led the country through an economic crisis, an immigration crisis, and through a very serious health crisis, a pandemic, and I am very much looking forward to working on the recovery of this country,” he said.

The Omtzigt affair was not the first time that Rutte has blamed a poor memory for making false statements in public.

Saying he did not have “an active memory” of crucial details, he survived a string of heated debates in recent years, on issues ranging from Iraqi civilians killed in Dutch bombardments to a corporate lobby to scrap a dividend tax.