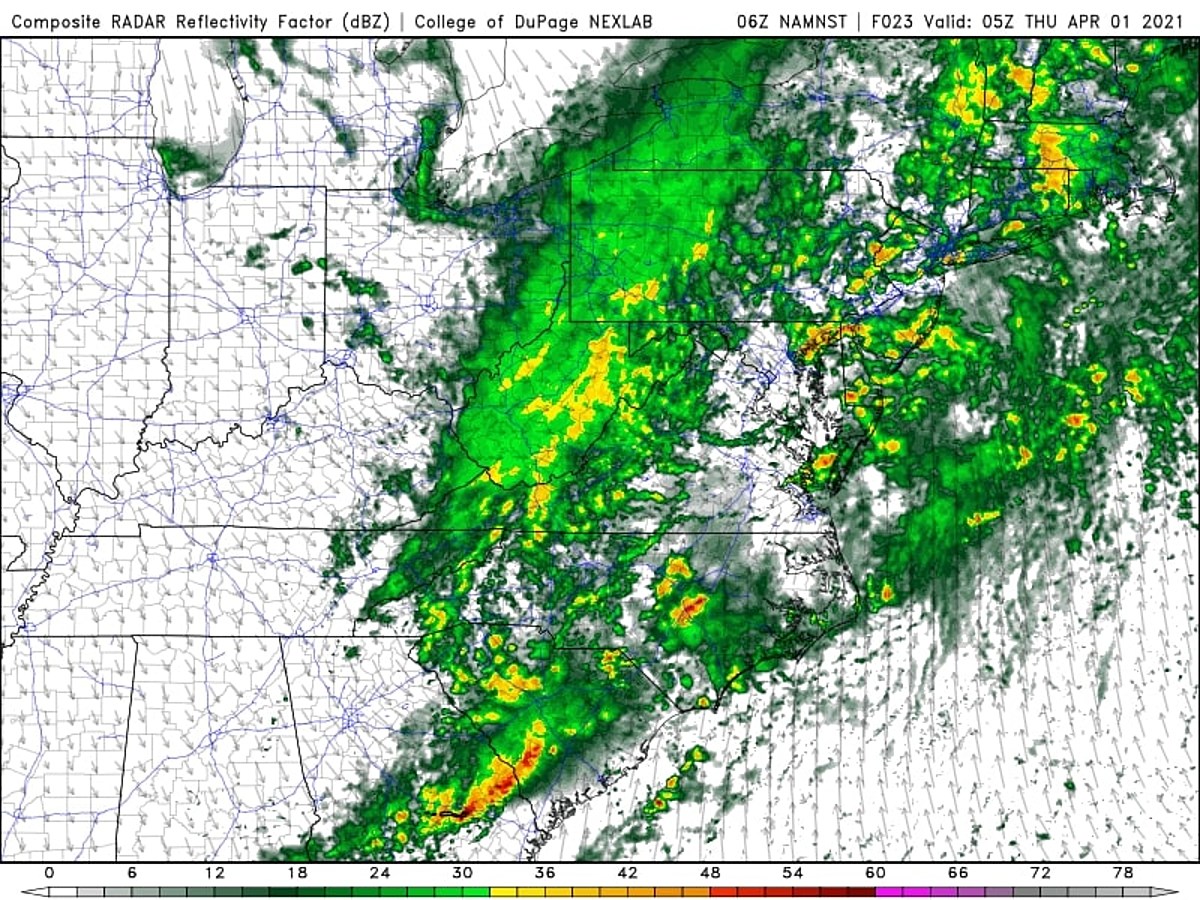 New Jersey’s next storm system is inching closer and closer. It will bring, in chronological order, a batch of soaking rain, a brisk northwest wind, tumbling temperatures, and a (brief) chance of snow.

The only change to the forecast here is a slightly later arrival time for our rain. As of this writing (5 a.m.), the leading edge of wet weather is over western Pennsylvania, still several hundred miles west of New Jersey.

Wednesday morning will be dry. Skies are mostly cloudy, with early temperatures in the upper 40s to lower 50s. Thermometers should pop into the 60s for most by lunchtime. Mild, for now.

You will definitely need the umbrellas and windshield wipers later on. Showers and/or drizzle may come into play around midday. Then steady to heavy rain will arrive later in the afternoon. And I do mean heavy – weather and travel conditions will likely go downhill quickly, as rainfall ramps up quickly.

Wet weather will continue Wednesday night. There will be some breaks in the rain bands, especially after Midnight. That will coincide with the passage of a cold front – a gusty northwest wind will kick up to about 35 mph through early Thursday morning.

We will dry out Thursday morning. As residual rain wraps up, there is a legitimate shot precipitation flips to snow in northwestern New Jersey.

However:
1.) Temperatures will only dip cold enough for snowflakes in northwestern New Jersey.
2.) Cold air is dry air, so the final push of potentially wintry precipitation will be rapidly fizzling.
3.) Any snowfall will be brief.
4.) The ground will be relatively warm and wet, making it hard for any snow to stick.

Even though some models show up to an inch of snow falling in NW NJ – I highly doubt we’re going to get any substantial accumulations. Therefore, I’m still not worried about travel headaches.

Don’t expect much clearing through Thursday afternoon, as skies remain mostly cloudy. High temperatures will push into the mid to upper 40s. Not terrible, but unseasonably cool – about 10 degrees below normal, in fact. Combined with a continuing brisk wind, it’s going to feel quite blustery.

A widespread freeze looks likely Friday morning, as skies clear out and we enter the core of this cold air mass. Early-season gardeners, beware – your sensitive plants are not going to like the chill!

Friday’s high temperatures will only reach the lower 40s. It will still be breezy too. At least we’ll stay dry all day, with periods of sun and clouds throughout.

Another freeze Saturday morning. Then, let our next warmup begin. Highs on Saturday should reach the lower-mid 50s, with lots of sunshine. Still a hair below normal for early April.

Temperatures will push closer to 60 degrees on Sunday. But skies will turn partly to mostly cloudy. And it looks like a few rain showers may pop up. It won’t ruin your day – I just can’t guarantee a dry Easter, unfortunately.

The warming trend will carry into early next week, with widespread 60s (at least) returning to the Garden State. Our long-range forecast looks pretty typical for April, really. Generally mild temperatures, at or above normal. And a few sporadic rain chances through the first half of April. If all goes according to plan, I expect nothing major, nothing severe, and nothing wintry.

The CMDZ Weather Blog will be on vacation over the next few days, as I take some vacation time. Of course, you’ll still find weather forecast updates both on-air and online.

DID YOU KNOW: New Jersey has a volcano!

A walk through Riverton, NJ: Historic gem on the Delaware

Lots of history and tons of charm in this tiny little Burlington County town tucked in along the Delaware.