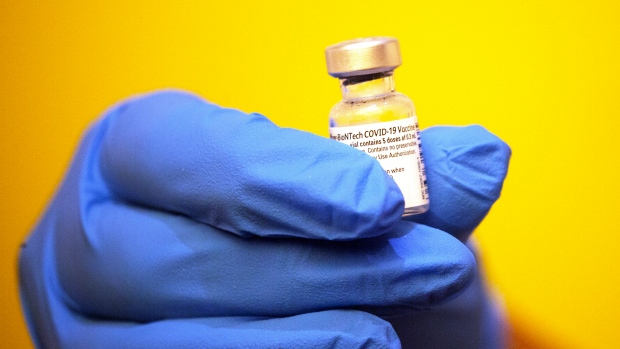 But the news was tempered by ongoing concerns about the Oxford-AstraZeneca vaccine, and signs in much of the country that the pandemic still has a lot more misery to unleash.

“We’re entering the final stretch of this crisis,” Prime Minister Justin Trudeau said at a news conference in Ottawa. “We just need to stay strong, a little longer. More and more vaccine doses are coming every week. So there’s reason to be hopeful.”

Trudeau said Pfizer and BioNTech will send another five million doses of their mRNA vaccine to Canada in June, bringing their total shipments in the spring to 17.8 million. The company is expected to ship more than one million doses a week in April and May, and more than two million every week in June.

Moderna remains on course to ship more than 12 million doses between April and the end of June.

Procurement Minister Anita Anand added that Canada now expects 4.4 million doses of the AstraZeneca vaccine by June 30, and said the first shipments of Johnson & Johnson’s single-dose vaccine are set to arrive at the end of April. She doesn’t know yet how many doses will be in that first shipment.

Even without J&J, and barring any unexpected interruptions in production or export of vaccines, Canada is in line to get more than 44 million doses before Canada Day.

That should mean all adults over 18 will be offered a vaccine faster, and that the wait for a second dose may not be as long as the current four months.

Canada needs about 31 million doses to offer at least one shot to every adult. Studies of the vaccine on children and adolescents are ongoing, so nobody under 18 can get most vaccines yet, while Pfizer is approved for youth as young as 16.

Chief Public Health Officer Dr. Theresa Tam said those trials could move faster depending on how much COVID-19 spreads. In Canada, the signs are worrisome.

“The ongoing increase in infection rates is now playing out in our hospitals with rising trends and severe and critical illnesses placing renewed strain on the health system,” Tam warned.

She said hospitalizations were up six per cent in the last week and the number of patients needing critical care was up 14 per cent.

Much of that spread is linked to the more contagious variants of concern. Confirmed variant cases almost doubled in the last week alone, going to more than 9,000 from 5,500 on March 30. Tam warned there are thousands more cases that have screened positive for a variant and are just awaiting full sequencing to identify which one.

The growth is fuelling new or extended public health measures.

British Columbia initiated a three-week ‘circuit-breaker“ lockdown starting today, and Saskatchewan extended a lockdown in Regina by a week until at least April 12.

Ontario Premier Doug Ford, whose province reported more than 2,000 cases for the sixth day in a row Tuesday, said he is considering additional restrictions to combat the surge in disease.

Medical experts across Canada also stepped up efforts to combat vaccine hesitancy Tuesday, following the news Monday that every province and territory will stop using the AstraZeneca vaccine for people under age 55, pending further analysis of the risks it might pose from blood clots.

Health Canada requested more analysis from the company after more reports from Europe about blood clots. Most of those patients were women under the age of 55 who developed the clots between four and 20 days after getting the AstraZeneca vaccine.

The risk is still considered extremely rare – between one in 100,000 and one in one million – but it wasn’t picked up during the clinical trials and the additional cases were enough to ask for further study to ensure the benefits of the vaccine still outweigh the risk for all age groups.

No blood clots linked to the vaccine have been found in Canada. About 309,000 doses have been given in Canada to date from the initial shipment of 500,000 two weeks ago. Many provinces initially reserved those doses for people in their 50s and early 60s.

Another 1.5 million AstraZeneca doses are arriving this week.

Alberta’s medical officer of health Dr. Deena Hinshaw said Monday that Alberta got 58,500 AstraZeneca doses and only 900 went to people under 55.

Others, like Prince Edward Island, which were using AstraZeneca entirely on younger adults, have stopped its use for the moment.

The federal government also joined an international effort seeking answers about the origins of the COVID-19 pandemic this week. Canada signed a joint declaration with 13 other countries, including the United States, United Kingdom, Japan, Australia, Israel and Denmark, who are voicing concerns about a report on the early days of COVID-19.

The statement outlines the nations’ unease after World Health Organization experts went to study the original outbreak of the virus in China’s Wuhan province and encountered delays and a lack of access to original data.

This report by The Canadian Press was first published March 30, 2021.