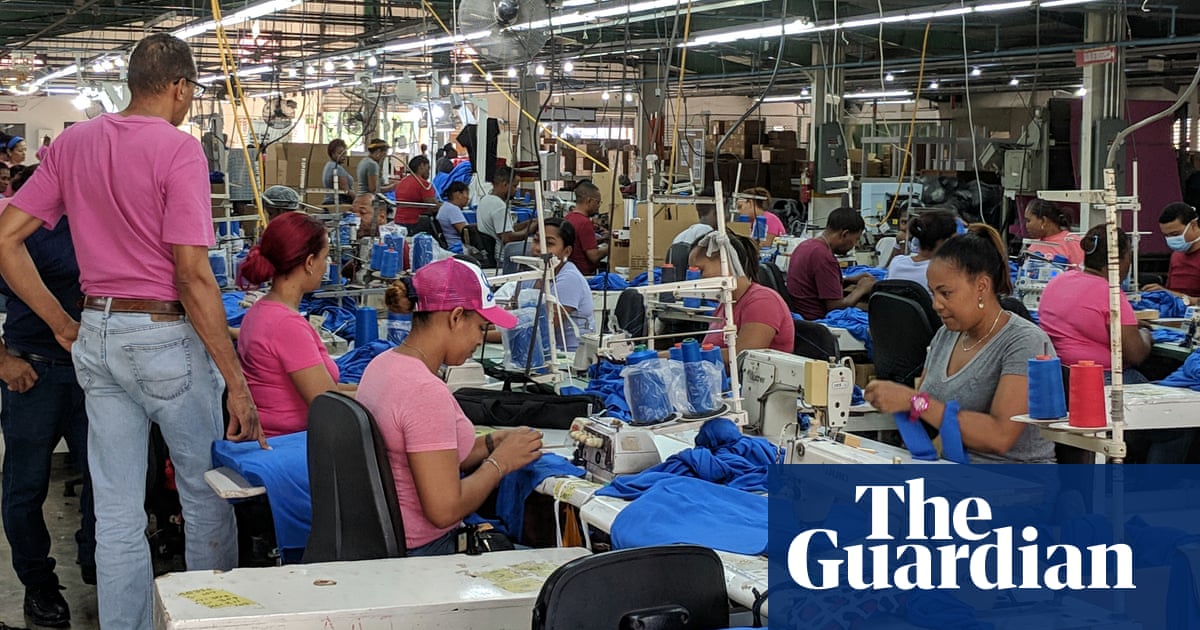 When Alta Gracia launched in 2010 it was hailed as an experiment to show the world that garment factory workers in the developing world could aspire to a living wage and that their labor rights could be respected. But in order to survive the company, which sells T-shirts and sweatshirts made in the Dominican Republic to US college students, also needs to make a profit. And then came Covid-19.

Nine months after the pandemic hit, Alta Gracia workers were furloughed without pay and the US based company is struggling to stay afloat. This is not the first time the company has struggled and its failure to keep its head above water over a decade led some to question whether a clothing business can pay a decent wage and still be profitable.

For workers the situation is dire. “I am two months late on my rent,” said Valentina García, who has been at the factory for seven years. “I owe my neighbor 12 thousand pesos [$200]. “I have zero in the bank and have two children to support,” she added.

In December, work at the small factory nestled in the Caribbean was suspended for three months and in March, the furlough was extended for another 90 days, putting union leader, Eduardo Cabrera, in a panic. “They gave us two options. Temporarily suspending activity or definite closure.”

Workers like Patricia Sandoval, who remembers her first day at the factory over a decade ago, feared the worst. “We are all worried the company will go bankrupt and leave us with nothing. Everyone is just thinking ‘give me my severance pay and let me go.’”

The Dominican government gives furloughed factory workers a monthly subsidy of 8,500 pesos ($150) or 75% of the minimum wage. But it represents only 30% of the monthly living wage of 27,027 pesos ($475) that Alta Gracia workers like Patricia and Valentina have consistently earned over the years. Those with debts never get to see the government subsidy at all. “The bank takes it directly out of my pay,” said several workers, all of them women.

Scott Nova, executive director at the Workers Rights Consortium (WRC), has been ensuring that labor rights are respected at the factory since the company’s inception. Nobody disputes his claim that Alta Gracia is the only garment factory in the developing world that pays a living wage in an industry known for exploitation and abysmal working conditions.

But this time Nova recognizes that the living wage is not being met. “There is a lot of anger and frustration and it is completely understandable,” he says.

In the wake of the Covid-19 pandemic, the global apparel industry has taken a brutal hit

Some workers have signed up at employment agencies. But taking on a new job during a furlough means risking losing the severance pay workers are entitled to if the company folds. And job opportunities during the pandemic are scarce. Most of the furloughed workers want to go back to work at Alta Gracia, where workers are paid almost 2.5 times the minimum wage. They also get paid vacation and union representation. As Valentina puts it: “The pay is better, we don’t have to commute and we all get along.”

In the wake of the Covid-19 pandemic, the global apparel industry has taken a brutal hit. Orders for clothing have dropped precipitously and revenue has plummeted in an industry regarded as non-essential. Mark Anner, a professor of labor and employment relations at Penn State University says the pandemic has triggered the garment industry’s worst crisis in contemporary history, with conservative estimates suggesting at least 3.5 million (10%) of global garment workers having lost their job in 2020.

The Clean Clothes Campaign estimates that during the months of March, April and May 2020 garment workers around the world had already lost between $3.19bn and $5.79bn in wages.

Unlike many competitors in the Dominican Republic and abroad the Alta Gracia factory was able to keep running by switching to making masks when the pandemic hit, while maintaining social distancing and ensuring workers were provided with facial coverings.

In the meantime the company CEO, John Allen, who took over in 2019, leveraged his background in e-commerce to sell Alta Gracia T-shirts online through platforms such as University Tees, Shelley Cove or Ivory Ella.

The 60 workers left at the company were paid a living wage throughout most of 2020. Up until now.

Aside from the pandemic, Alta Gracia’s almost exclusive reliance on a student client base has undoubtedly made things worse.

Some 400 Barnes and Noble College and Follet stores stock Alta Gracia apparel at universities across the country. But with students studying online, most campuses are deserted and so are their stores, making a company that has not been able to diversify even more vulnerable.

Alta Gracia’s issues are not all coronavirus related and in recent years, the company has experienced both a shortage of capital and wavering orders from retailers.

We are all worried the company will go bankrupt and leave us with nothing.

Despite multiple investors and numerous changes in management, finance director, Suzanne Travaille, says that Alta Gracia has never been profitable. “In its history the factory has not broken even.” Today the company is losing money.

In October 2019, six months before the pandemic hit, the factory laid off 44 workers or 40% of its workforce to “increase efficiency” amid a drop in client orders. Half of the staff at the headquarters in Atlanta, including their head of marketing were also let go that year. “The entire company is hurting,” said the CEO, John Allen.

Mark Anner, who heads the Center for Global Workers’ Rights and advises the University Students Against Sweatshops (USAS) at Penn State University, believes the living wage model is viable. But warns that garment industry margins are thin and companies need scale to be able to thrive.

Others argue that Alta Gracia is not the best barometer of a living wage business model. “I do not think that Alta Gracia has been a real test,” says Nova, who monitors labor standards in factories around the world.

In his mind, the endeavor would have to be led by a bigger company “that really offers millions of consumers a choice,” and has “substantial marketing dollars”.

Among the multitude of global companies touting socially responsible slogans, which haven’t always been verified, some believe the company has fallen short in promoting how Alta Gracia – backed by a strict certification process – really is unique.

Megan Lowell, a sophomore student whose mother – visiting from Seattle – recently bought a long sleeved Alta Gracia T-shirt at the Barnes and Noble campus store at Catholic University, was not aware that her purchase was contributing to keeping an ideal alive.

No doubt retailers who sell garments from well-known brands produced in sweatshops alongside products which are socially responsible see the perils of pitting one brand against the other.

That is why Nova ultimately believes that a successful living wage company would have to “sell nothing but living wage goods”.

The premise when the company launched under the leadership of Joe Bosich, founder of Knights Apparel, was that socially conscious college students would buy Alta Gracia products. John Allen, the company’s CEO today believes the social impact is only part of the package. “We still need to be cost competitive and sell a high-quality product,” he says.

Since the Guardian started reporting, the company secured funding from private donations and committed to paying 50% of the living wage for six weeks to compensate for some of the workforce’s loss during the furlough. In addition, workers will continue to be entitled to the government subsidy.

Workers like Keila Mena were relieved to hear the news. She had moved in with her daughter during the furlough and said the announcement was like “seeing a glass of water when you are thirsty”.

President Joe Biden has pledged to make vaccines available to all by May and colleges look set to open full-time in the fall. John Allen is buying time. He is hopeful students will return to their campuses and want to sport their college apparel.

But as the company continues to hang on by a shoestring, the pandemic has taught him how quickly things can change. So he is monitoring the situation day by day.

As he works towards a new breakthrough deal to help boost distribution, many will no doubt be praying that Alta Gracia can rise again from the ashes. Not least of all the factory workers in the Dominican Republic.