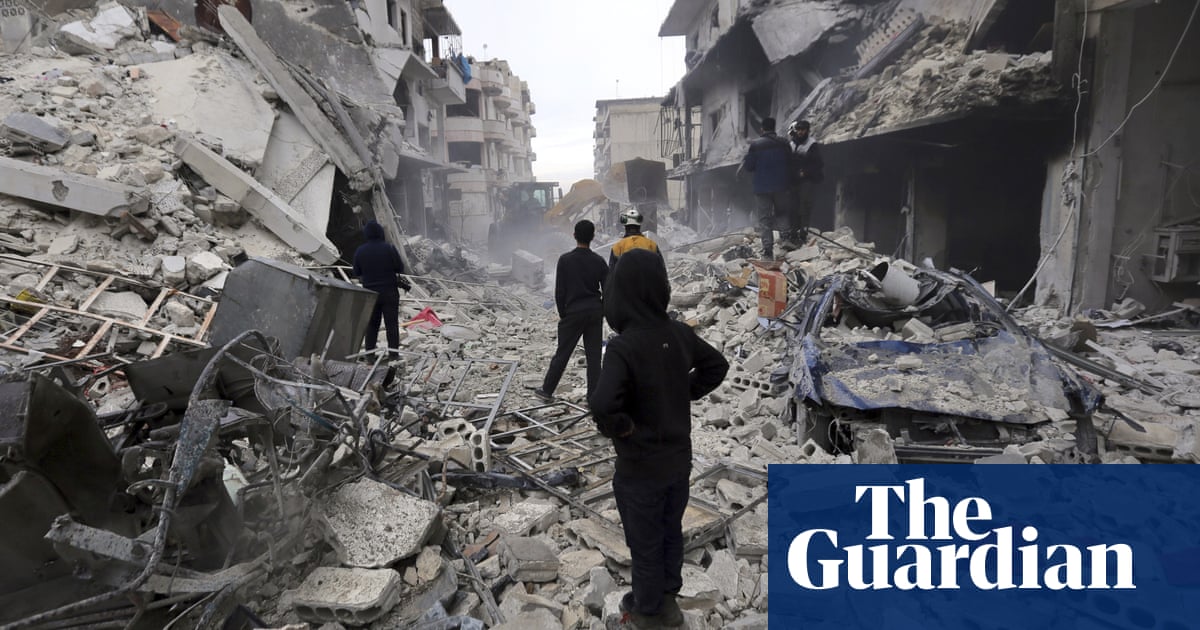 Leading human rights organisations in Russia have released their first comprehensive report on abuses in the decade-old conflict in Syria, condemning Moscow’s direct participation in indiscriminate bombings of civilians, its backing of the Assad regime’s use of torture, and culpability in other war crimes.

“Russian state media does not report on the victims of bombardments, nor the forced displacement of civilians resulting in part from Russia’s military actions in Syria,” the authors of the report wrote. “As a result, the Russian public does not have sufficient knowledge to judge whom and what we are supporting in Syria, how much this war costs us, and how much suffering the war has inflicted upon civilians – people who have never taken up arms.”

The 198-page report, A Devastating Decade: Violations of Human Rights and Humanitarian Law in the Syrian War, was billed as the first report on the conflict authored by Russian human rights groups, and includes interviews with survivors of the conflict carried out in Lebanon, Jordan, Turkey, Germany, Belgium, the Netherlands and Russia.

“Focusing on the plight of these civilians, we conclude that much greater responsibility for Syria’s future lies with all state parties to the conflict, Russia foremost among them,” the report says.

Its authors include some of Russia’s best-known human rights defenders, including the Memorial human rights centre, the head of the Civic Assistance Committee, Svetlana Gannushkina, as well as prominent members of the Soldiers’ Mothers of St Petersburg and the Youth Human Rights Movement.

While the report also details abuses carried out by armed opposition groups and accusations of indiscriminate bombing by western coalition forces, it issues a rare criticism of Moscow’s policy in Syria from within the country, where the war is largely portrayed as a successful conflict against Islamist groups with western backing who are responsible for most atrocities against civilians.

“Influence entails responsibility,” the report reads. “Given Russia’s key role in keeping the Assad regime in power, we urge the Russian government to use its influence on Syrian authorities to end arbitrary arrests, torture and degrading treatment in prisons, extrajudicial killings and enforced disappearances.”

Following news reports that indicated Russian warplanes targeted hospitals and other civilian infrastructure, the report investigated operations carried out by Russian aerospace forces that led to civilian deaths in Syria.

“Based on our interviews and the review of documentation, there was a clear pattern of indiscriminate and targeted attacks that did not correspond to the presence of military targets,” the report says. “Many of our witnesses insisted that in most cases residential areas, located far away from any military objects, were targeted.”

The report calls on Russia and western governments to launch full inquiries into whether indiscriminate bombing campaigns have led to the deaths of civilians or the destruction of infrastructure.

Other sections of the report focus on the use of illegal weapons, arbitrary detention, forced disappearances and torture, as well as the treatment of refugees of the conflict abroad, including in Russia where just a handful have been granted asylum since the conflict began.

“The Russian government has refused to grant status or asylum to all but a handful of Syrians, despite Russia’s role in their forced displacement,” says the report’s executive summary.

The report also includes detailed accounts of life under armed opposition groups, including Islamic State in Raqqa, Hayat Tahrir al-Sham in Idlib, as well as the siege and bombardment of Aleppo.

The report took two years to compile, the authors wrote, and was compiled mainly to present information about human rights abuses in Syria to Russian readers, where “we have the sense that Russian society is not adequately informed about this conflict in which our country has played a key role.”

The authors also wrote that while they sought to document rights abuses on all sides, they were especially focused on reaching Russian readers and detailing Moscow’s role in human rights violations and war crimes taking place in Syria.

“Unfortunately, the overwhelming majority of our interviewees do not see Russia as a saviour, but as a destructive foreign force whose military and political intervention helped bolster the war criminal heading their country,” the report says.