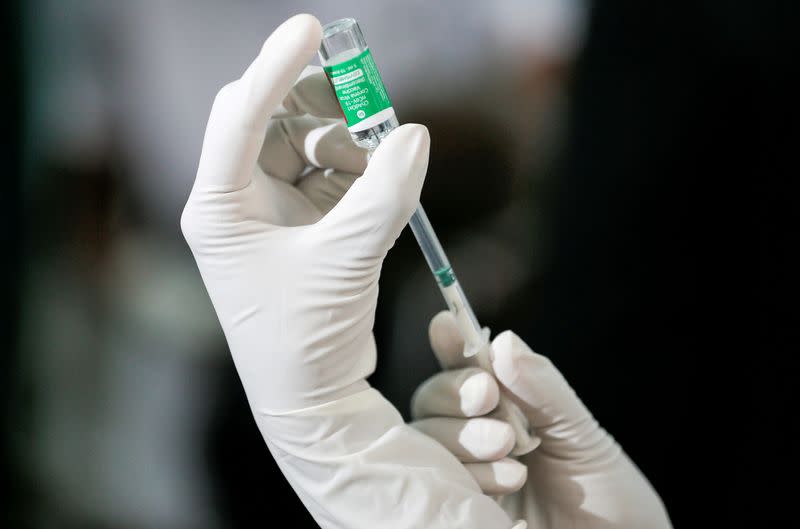 (Bloomberg) — India’s central bank took a step toward formalizing quantitative easing, pledging to buy up to 1 trillion rupees ($14 billion) of bonds this quarter to keep borrowing costs low and support the economy’s recovery.The debt purchases under the program in the secondary market will start from April 15, Reserve Bank of India Governor Shaktikanta Das said Wednesday, after policy makers held the benchmark repurchase rate at a record low 4%, a decision predicted by all 30 economists surveyed by Bloomberg.Bonds and stocks rallied, with the 10-year bond yield dropping as much as 7 basis points and the S&P BSE Sensex index extending gains to 1.3%. The rupee slid 1.3% against the dollar.While the RBI has been purchasing government securities in the secondary market, it’s the first time the central bank is committing to an amount upfront, yielding to market pressure to give traders guidance on purchases amid a near-record government borrowing plan. Das had earlier said the bank bought 3.1 trillion rupees worth of bonds in the previous fiscal year to March 31, and planned similar or more purchases this year.The plan, which is in addition to the central bank’s other unconventional policy tools like open market purchases and “Operation Twist” — where it buys long dated bonds and sells shorter maturities — adds to more certainty about policy makers’ intentions.“We can definitely see it as a quantitative easing program and markets taking it very positively,” said Naveen Singh, head of fixed-income trading at ICICI Securities Primary Dealership in Mumbai. “Still, it would be a challenge to keep absorbing the huge supply at prevailing prices.”QE in EMsThe RBI joins Indonesia, Poland, and Hungary among other emerging-market central banks that have experimented with some form of quantitative easing amid the pandemic. The International Monetary Fund in October estimated that 20 emerging markets had embarked on asset-purchase programs for the first time, judging them “generally proven effective,” including by providing some stability to local financial markets.“RBI’s endeavor is to ensure orderly evolution of the yield curve, governed by fundamentals as distinct from any specific levels thereof,” Das said.Aside from providing initial market calm, such programs can be used for further financial easing and funding of fiscal stimulus. The dangers — especially for emerging markets with less credibility than the world’s top central banks — are that investors lose patience or faith that the programs will be targeted and temporary.Policy makers in India have had a tough balancing act, where a desire to do more to support the economy has met persistent inflation pressure and rising bond yields. A nascent recovery in Asia’s third-largest economy has been disrupted by a jump in virus infections to a record of more than 100,000 this week.“The recent surge in infections has, however, imparted greater uncertainty to the outlook,” Das said, while retaining the 10.5% growth forecast for the fiscal year started April 1. “Localized and regional lockdowns could dampen the recent improvement in demand conditions and delay the return of normalcy.”What Bloomberg Economics Says…“The extra support is aimed at countering risks to growth from multiple fronts — an exponential rise in coronavirus cases, fresh containment measures in several states and rising yields. We believe these measures will help secure a stronger growth recovery path by 2H fiscal 2022, subject to containment of the second virus wave.”– Abhishek Gupta, India economistFor the full report, click hereAlthough inflation at 5.03% in February was within the central bank’s 2%-6% target band, sticky underlying price pressures have been a problem for policy makers in resuming policy easing. That’s because higher fuel and volatile food prices, which make up more than 50% of the consumer price index, are causing second round effects.The RBI revised the outlook for prices, with inflation seen at 5% in the fourth quarter of last fiscal year. That’s above the 4% midpoint of the central bank’s target band. Deputy Governor and rate panel member Michael Patra told reporters that the MPC had decided to see through sticky underlying price pressures because addressing growth was the need of the hour. He said the RBI wanted to ensure more effective policy transmission through the newly announced bond buying program, even though there were risks attached to it.“The key takeaway in today’s policy announcement has been a step taken to manage long term yields by announcing G-Sec Acquisition Program, which is akin to an OMO calendar,” said Shubhada Rao, founder of QuantEco Research in Mumbai. “It becomes imperative in the context of a large government borrowing program.”(Adds details from press conference, updates market reaction)For more articles like this, please visit us at bloomberg.comSubscribe now to stay ahead with the most trusted business news source.©2021 Bloomberg L.P.