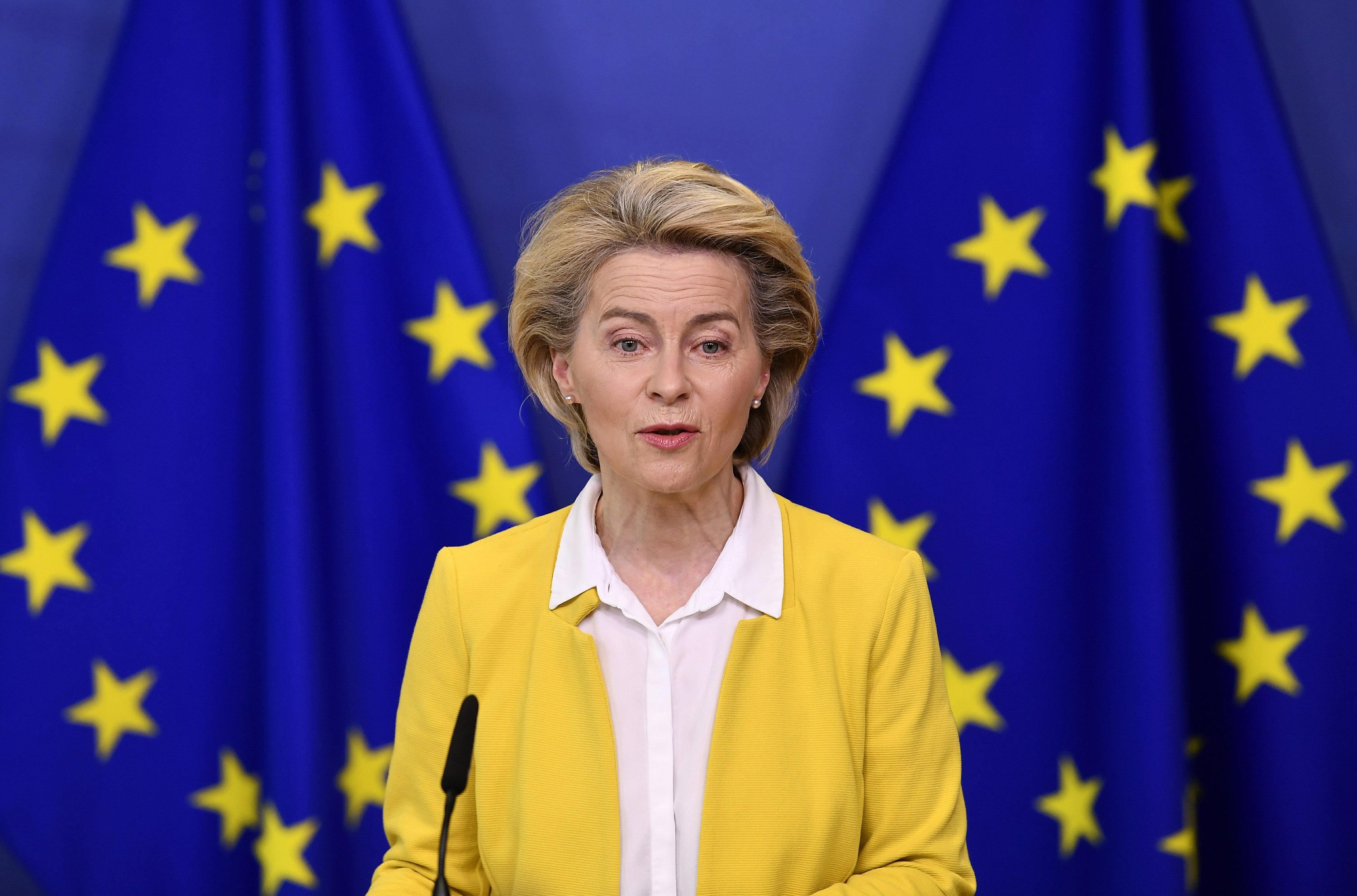 BRUSSELS — The head of the European Union’s executive arm has announced plans for a major contract extension for COVID-19 vaccines with Pfizer stretching to 2023.

European Commission President Ursula von der Leyen said Wednesday that the EU will start negotiating to buy 1.8 billion doses of the Pfizer vaccine through 2023. Pfizer has been a mainstay of the EU’s vaccination drive so far.

Von der Leyen expressed full confidence in the technology used for the Pfizer vaccine, which is different from the technology behind the AstraZeneca vaccine.

Pfizer plans to provide the EU with an extra 50 million doses in the second quarter of this year, on top of 200 million doses already earmarked for the bloc. The deliveries will be especially welcomed by the EU’s 27 member nations considering supply delays and concerns about rare blood clots potentially linked to the AstraZeneca vaccine.

— Putin gets second vaccine, won’t say which one

— The postponed Tokyo Olympics open in 100 days, but nothing is certain these days

The Russian leader announced getting the jab, which was kept out of the public eye, at a session of the Russian Geographical Society on Wednesday, in which he took part via video link.

“Right now, before entering this hall, I have also gotten the second jab. I hope everything will be fine. I don’t even hope as much as I’m sure of it,” Putin said.

Putin got his first coronavirus shot on March 23, also out of sight of the cameras, and the Kremlin wouldn’t reveal which of the three vaccines currently approved for use in Russia the president has taken.

The Russian leader’s vaccination comes several months after widespread immunization against COVID-19 started in Russia — a delay that puzzled many, with some critics arguing that it was contributing to the already existing public hesitancy about the vaccine.

Russian authorities have given regulatory approval to three domestically developed shots — Sputnik V, EpiVacCorona and CoviVac. All three received authorization before completing advanced trials experts say are necessary to ensure their safety and effectiveness in line with established scientific protocol.

It adds pressure on the government to speed up a nearly nonexistent vaccination drive and do more to control a surge that comes amid mass travel as the country celebrates its traditional New Year festival.

The 1,335 new infections brings the number of new cases to nearly 7,000 since April 1, when a cluster was linked to nightclubs and bars in central Bangkok. Most of the new cases reported Wednesday were yet again in Bangkok. There were also large increases in the northern province of Chiang Mai and the southern seaside province of Prachuap Khiri Khan.

Many of the new infections are a more contagious variant of the virus first found in Britain. Coupled with widespread travel for the Songkran festival, or Thai New Year, that is fueling the surge, said Dr. Opas Karnkavinpong, director-general of the Disease Control Department. The festival officially began Tuesday and lasts for three days, but many people travel for a week.

The move came a day after Health Minister Vlad Voiculescu reportedly made changes to the criteria the government uses to determine which virus-control restrictions to impose on local areas without informing Prime Minister Florin Citu.

Voiculescu was appointed in December and briefly served as Romania’s health minister in 2016. He had promised to reform the nation’s strapped health care system.

“Voiculescu meant well and insured the ministry at a critical moment in time, but it’s hard to reform an ailing system in a few months, not to mention with COVID-19 at full speed,” Radu Magdin, a Bucharest-based analyst, told The Associated Press.

WARSAW, Poland – Poland plans to go ahead with immunizations using the Johnson & Johnson vaccine after receiving its first batch of 120,000 doses on Wednesday.

Health Minister Adam Niedzielski said Poland is following the latest recommendations from the European Medicines Agency, which said it is “currently not clear” whether the J&J shot caused rare blood clots reported in some recipients. The EMA approved the vaccine for use in the European Union last month.

“In line with these recommendations, we will want to use it in inoculations,” Niedzielski said.

The Food and Drug Administration on Tuesday temporarily paused Johnson & Johnson shots in the United States to investigate possible links to blood clots in six women six to 13 days after vaccination.

Poland is trying to speed up its vaccination drive amid high numbers of daily coronavirus cases and COVID-19-related deaths. Niedzielski said some 75% of COVID-19 hospital beds are taken.

The country of some 38 million people has administered almost 8 million doses of the Pfizer, Moderna and AstraZeneca vaccines.

Top Maharashtra state officials stressed that the closure of most industries, businesses, public places and limits on the movement of people didn’t constitute a lockdown.

Last year, a sudden, harsh, nationwide lockdown left millions of people in India jobless overnight. Stranded in cities with no income or food, thousands of migrant workers walked on highways to get home. Since then, state leaders have repeatedly stressed that another lockdown wasn’t in the cards.

India on Wednesday reported over 180,000 new coronavirus cases in the past 24 hours, about a third in Maharashtra state, and a total of 13.9 million cases in the pandemic.

Maharashtra Chief Minister Uddhav Thackeray said that most public places, shops and establishments will be shut for 15 days starting 8 p.m. Wednesday, except for essential services like grocery stores and bank..

MADRID — Spain’s prime minister says his government is maintaining its goal of immunizing 70% of the nation’s adult population, some 33 million people, by the end of the summer despite the delay in the European rollout of the Johnson & Johnson vaccine.

Spain was expecting to receive 300,000 doses of the Janssen vaccine on Wednesday, the first delivery of the jab produced by Johnson & Johnson. The country wants to prioritize people aged between 70 and 79 to receive the single-dose vaccine.

But those plans had to be put on hold after the pharmaceutical company delayed delivery of the vaccine to European countries following the decision by the U.S. Food and Drug Administration to pause the shots in the United States to investigate possible links to very rare blood clots.

The hold up comes after various delays in shipments of other vaccines and a similar blood clot scare with the AstraZeneca vaccine that led Spain to limit it to people over 60 years old.

Prime Minister Pedro Sánchez, however, told Spain’s Parliament on Wednesday that “the pace of vaccination is going to accelerate in the month of April and (…) we will meet out goal.”

BERLIN — German health authorities are recommending that people younger than 60 who have already received one shot of the AstraZeneca vaccine use a different vaccine for their second dose over concerns of blood clots.

The Health Ministry said Wednesday that it was recommending that people in that category receive as their second shot either the Pfizer-BioNTech or Moderna vaccine, both of which were developed using a different process.

It says, however, that in individual cases younger people wanting a second AstraZeneca shot can get one so long as they have a careful medical risk assessment. That also applies to high-risk people under the age of 60 still awaiting their primary vaccination.

The reports of rare blood clots in some people who’ve received the vaccine prompted Germany and several other countries in the 27-nation European Union to limit the AstraZeneca shots to older age groups, who are more at risk from serious illness when infected with COVID-19.

CANBERRA, Australia — Australia’s trade minister will fly to Europe to argue against export restrictions on COVID-19 vaccines as the nation attempts to accelerate its inoculation rollout.

“The first idea I’ll be bringing to the table is that export restrictions aren’t the way to go,” Tehan told Australian Broadcasting Corp. on Wednesday.

Deliveries of the AstraZeneca vaccine to Australia were 3 million doses behind schedule, he said.

Australia is rethinking its vaccine rollout after the nation’s health authorities advised last week that Pfizer was now the preferred option for people younger than 50 because of a potential risk of rare blood clots linked to the AstraZeneca shot.

The government also abandoned its target of delivering at least one dose of either vaccine to all eligible adults among a population of 26 million by October.

But Prime Minister Scott Morrison said on Wednesday offering all Australian adults at least one vaccine dose by the end of 2021 was a possibility if international supply lines remained open.

The Korea Disease Control and Prevention Agency said Wednesday it’s confirmed 731 new cases over the past 24 hours. They brought the country’s total to 111,419 with 1,782 deaths.

The spike comes amid criticism of a slow vaccine rollout while people are increasingly venturing outdoors to take advantage of good weather.

Senior health official Yoon Taeho says an increased mobility last weekend was proof that South Korea’s public vigilance has loosened, and that elevating social distancing rules will be discussed in the next few days.

Some individual insurance customers could receive premium credits or rebates of nearly $300 on average, according to an analysis of government data from the non-profit Kaiser Family Foundation.

The Affordable Care Act requires insurers to give customers refunds or premium credits if they don’t spend certain percentages of the premiums they collect on care and costs related to it.

Kaiser’s analysis noted that last year hospitals and other care providers canceled surgeries and non-essential care early in the pandemic and then during subsequent COVID-19 spikes.

Kaiser Vice President Cynthia Cox said nearly half of customers in the individual market receive these annual rebates. Some people with employer-sponsored coverage also may get rebates that they share with their company.

Rebate totals will be finalized later this year. They generally are then delivered by the end of September. The totals will vary by market and depend on factors like whether an insurer has already offered premium breaks to counter the drop in care.

BERLIN — South Africa has suspended giving the Johnson & Johnson vaccine as a “precautionary measure” following the FDA decision in the U.S. to pause the use of the vaccine while rare blood clots are examined.

All six cases were in women between ages 18 to 48, including one who died. The unusual clots occurred six to 13 days after vaccination.

South Africa has given more than 289,000 shots of the J&J vaccine to the country’s health workers without any reports of blood clots, Health Minister Dr. Zweli Mkhize says.

He says South Africa is halting the use of the J&J doses “out of an abundance of caution.” He expects the questions regarding the J&J vaccine should “be cleared within a matter of days.”