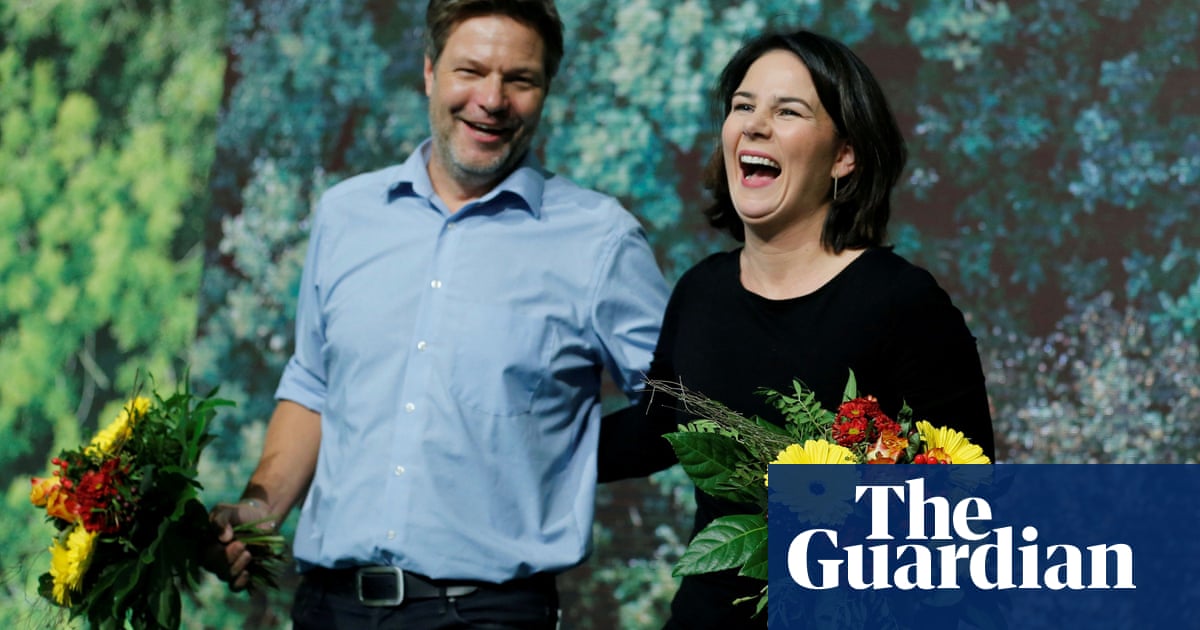 Five months before national elections, a Green party that once styled itself as the rebel of German politics is finding itself in an unusually respectable position.

The party’s standing in the polls – in second place at 21-23% of the vote – means it will on Monday, for the first time in its 41-year history, nominate a candidate for chancellor. Furthermore, that candidate will have a realistic chance of filling the top job in German politics by the end of the year.

A party once notorious for raucous conferences and ideological squabbles is also entering the hot phase of the election race with uncharacteristic unity, watching calmly from the sidelines while its closest competitor, the conservative CDU/CSU bloc, is tearing itself apart over its own choice of candidate.

The Greens’ co-leaders, Robert Habeck and Annalena Baerbock, one of whom will be unveiled as the party’s chancellor candidate, embody a wider culture change within the party that first entered the Bundestag in 1983.

“The modern Greens are comfortable with the idea of political power, and they know they need to dock in the political centre to get it,” said Wolfgang Merkel, a political scientist at Berlin’s Humboldt University.

“They are highly professionally organised, and conduct themselves with an aura of responsibility that one would expect of a party already in power,” Merkel said. “The Greens used to look like they were forever in search of a programme. Now they are a party that looks above all like it is seeking office.”

Unlike when the ecological party formed a government with Gerhard Schröder’s Social Democrats from 1998 to 2005, the biographies of its front row are no longer steeped in the counterculture politics of the 1968 student movement.

Baerbock, aged 40, has a background in international law and spent years fine-tuning the party’s climate and foreign policies behind the scene. Habeck, 51, used to be a translator of poetry, a novelist and philosopher before serving as the deputy state premier of Schleswig-Holstein between 2012 and 2017.

Their party is more academic, more culturally savvy and more comfortably middle-class than any of its previous iterations – a party for the winners of globalisation, say some critics. It is predominantly white, though less so than most other German parties: 15% of its delegates have a migrant background, the second highest percentage after the leftwing Die Linke.

The Greens’ drift to the political centre started during its last spell in power, when it did little to mobilise against Schröder’s labour market reforms and enabled the deployment of German troops in Kosovo.

But the tectonic shift did cause major friction between party’s pragmatic Realo and leftwing Fundi factions, which culminated in the paint-bombing of the then foreign minister, Joschka Fischer, at a special party congress in 1999, over his support for military engagement.

Under Baerbock and Habeck’s leadership, the Fundis have gone quiet to the point of inaudibility. The pair have worked hard on breaking with its image as a Verbotspartei, a party that wants to improve the world by decree.

On the campaign trail for the 2018 Bavarian state elections, Habeck developed a stage routine that starts with him bemoaning the consumerist absurdity of each household owning its own electric drill, a tool that is unlikely to be used for more than few minutes in its lifespan. Habeck’s punchline: he himself bought each of his four sons an electric drill as a birthday present.

The message was clear: here was a party that no longer pretends to be more intrinsically virtuous than its electorate. In Baerbock’s words, the new Greens are trying to be “radical and statesmanlike” at the same time.

While the rise of Fridays for Future helped to push the Greens’ core subject to the top of the political agenda, the party has worked hard over the last decade to broaden its expertise, poaching talent such as the former Pirate party politician Marina Weisband.

“The Greens were never a party that cared exclusively about the environment,” said Ulrich Schulte, a journalist for the Taz newspaper and author of Die grüne Macht (“The Green Power”), a book about the new Greens. “In its founding years, they also retailed in opinions on disarmament, alternative economics and women’s rights. But now the Greens’ manifesto is a full-range supermarket.”

This broadened appeal is also reflected in the ages of its voters. When the party first entered the German parliament, most of its votes came from those aged 18 to 24.

Since 2004, however, its strongest support in nationwide elections has come from the 49-59 segment, while the party has not lost touch with younger voters: at the European elections in 2019, Die Grünen were the most popular party among all groups under 45. And with some 68ers now pushing into the over-70s category, the party can hope for backers from across the generational spectrum.

Youth could still come up trumps when it comes to picking a candidate for the chancellory. Baerbock, born in Hanover in 1980, is seen as having slowly earned an edge over her co-leader over the last year.

The former tournament-level trampolinist has earned admiration for her tenacity, drive and thoroughness, not just among traditional Green voters: the editor of the centre-right Die Welt recently commented that any CDU candidate would find the female politician “a tough nut to crack”.

Picking Habeck as the Greens’ candidate instead would signal less of a different political direction than a different style. The northerner from Lübeck has not just continued to be a prolific author since co-chairing the party – publishing two new non-fiction titles in the last three years – but developed a new way for politicians to speak in public: reflective but not overtly pretentious, confident but also upfront about his own shortcomings.

Endorsing Habeck in a recent editorial for Die Zeit, the European Green politician Daniel Cohn-Bendit said a Green candidate stood a chance of winning the election “if he or she can convey a change of style to go with the change of politics that has been started by Joe Biden, a change that will make Erdoğan, Bolsonaro, Vladimir Putin and Xi Jinping look like yesterday’s men”.

“Mutual agreements can have more power than these strongmen presume,” said Cohn-Bendit, a considerable endorsement from the ex-student leader who represents the Greens’ rabble-rousing old selves like few others.