Iran’s enrichment of uranium to 60 percent represents not only the latest in a series of escalating violations of the 2015 nuclear accord, but the closest the Islamic Republic has ever come to producing weapons-grade fissile material.

For countries that oppose a nuclear Iran, it is a worrying development, bringing Tehran one step closer to a bomb. But it is also just one step, and not the final one, toward that goal.

In February, the Israel Defense Forces estimated that it would take Iran roughly two years to produce a nuclear bomb once it decided to do so. Most of that time would be needed not to produce the 90 percent enriched uranium needed for a weapon, but the other components of such a device, notably the detonator, which the Israeli military believes would take some 21 months to design and construct.

Though Iran has made some inroads on that front, beginning research in clear violation of the 2015 nuclear deal earlier this year into manufacturing uranium metal — a process of taking highly enriched uranium, in gas form, and turning it into solid metal, which is necessary to produce the core of a nuclear bomb — the IDF’s general timeframe has not changed significantly.

Crucially, in Israel and the United States, the prevailing assessment is that Iran is not — at this stage — interested in “breaking out” and moving full-tilt toward producing a nuclear bomb. The regime’s economy has tanked in recent years, due to crushing American sanctions and the coronavirus pandemic, making the prospect of a diplomatic agreement with the West, with sanctions relief and ensuing international investments, more alluring than an atomic weapon — at least for now. 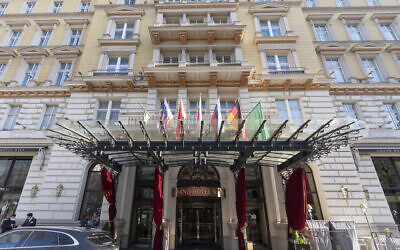 The 60% enrichment is a highly provocative move, which Iranian officials have publicly said is a response to the alleged Israeli attack on the Natanz nuclear site earlier this month. But it is also likely aimed at ratcheting up tensions for the ongoing negotiations taking place in Vienna between Iran and the United States, through intermediaries, regarding a mutual return to the 2015 deal, known formally as the Joint Comprehensive Plan of Action.

Pointedly, the move to a higher enrichment level also has no clear civilian application, which apparently flies in the face of Iran’s longstanding claim that its nuclear program is for nonviolent purposes.

Former US president Donald Trump abrogated the agreement in 2018, imposing heavy sanctions on the Islamic Republic and its officials. That prompted Iran to increasingly violate the terms of the deal, enriching more uranium and to greater degrees than it is allowed by the JCPOA and conducting other forbidden nuclear research.

US President Joe Biden is determined to return to the 2015 deal, setting that goal explicitly during his campaign and actively working toward it since entering office, and hoping that the agreement will serve as a jumping-off point for further negotiations with Iran.

He has demanded that Iran return to compliance with the deal before the US lifts sanctions, while Tehran has demanded the exact opposite. But despite this apparent impasse, the Israeli military believes that the US and Iran will eventually compromise and return to the JCPOA. Both sides have expressed satisfaction with the progress at the talks in Vienna.

In order to produce a nuclear bomb, Iran would require weapons-grade uranium, enriched to a level of 90%. In its natural form, uranium is typically made up of three main isotopes, uranium-238, uranium-235 and uranium-234, differentiated by the numbers of neutrons in their cores (146, 143 and 142, respectively). 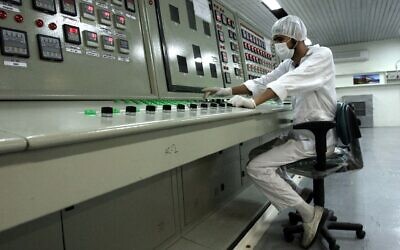 In this Feb. 3, 2007 file photo, a technician works at the Uranium Conversion Facility just outside the city of Isfahan, Iran. (AP Photo/Vahid Salemi, File)

Uranium-238 is by far the most common isotope, making up more than 99% of any given piece of uranium. It is radioactive, but it is not fissile, meaning it is incapable of sparking the explosive chain reaction needed for a nuclear weapon. On the other hand, uranium-235, which makes up less than three-quarters of a percent of a piece of uranium, is fissile and is the core ingredient needed for an atomic bomb. (Uranium-234 is even less prevalent and is also not fissile.)

In order to extract the uranium-235, powerful centrifuges are used, spinning uranium hexafluoride gas at a rapid speed, until the isotopes begin to separate from one another by their atomic weight, with the heavier uranium-238 being pushed to the walls of the centrifuge and the lighter uranium-235 staying toward the center.

It is a slow process, requiring multiple rounds of centrifugation to collect more and more highly enriched uranium — that is, uranium containing more and more uranium-235 isotopes.

One of the reasons Iran is believed to have chosen to enrich uranium to higher levels and to stockpile greater amounts of it as its primary form of violating the JCPOA is that it is an easily reversible step. As occurred when Iran entered the agreement, highly enriched uranium can be simply taken out of Iran and sold, likely to Russia, which would reset the clock. It is a provocative move for Iran to take on the nuclear front to ratchet up tensions with its adversaries, but one that is understood to not be as substantively significant as other aspects of creating a nuclear weapon.

“Although agreements can prevent the collection of fissile material, some research and development projects are irreversible,” an Israeli military official said earlier this year.