Yesh Atid chairman Yair Lapid called Sunday for the formation of a “unity government” of Zionists and patriots to break the ongoing political logjam and prevent a fifth national election, and signaled to President Reuven Rivlin that he expects to be given the mandate to build such a government if Prime Minister Benjamin Netanyahu cannot form a coalition.

Lapid noted that was recommended as prime minister by 45 MKs, and thus deserves the opportunity to try to build a coalition if Netanyahu fails. “We have 45 recommendations; I will be very surprised if the president does not impose [the task of forming] the next government on me,” he said.

Rivlin has hinted that, if Netanyahu cannot form a coalition in the remaining 18 days allocated, he might simply ask the Knesset to try to find a candidate who can muster the support of a majority in the House, rather than task a second candidate himself.

The de facto head of the “change bloc” spanning left-wing, centrist and right-wing wing parties opposed to Netanyahu, Lapid said he has been meeting with leaders of parties that have vowed not to sit in a government with the Likud leader and plans more meetings this week. The party later confirmed that he will meet with Joint List leaders Ayman Odeh and Ahmad Tibi on Monday.

Namechecking Yamina leader Naftali Bennett in a clear signal to Netanyahu that the leader of the right-wing party is not in the prime minister’s pocket, Lapid said, “I want to echo something that my friend Naftali Bennett said last week: Israel cannot afford fifth elections. Israel needs a government.”

Lapid has said that he has offered Bennett to be prime minister first in a rotation agreement between them. 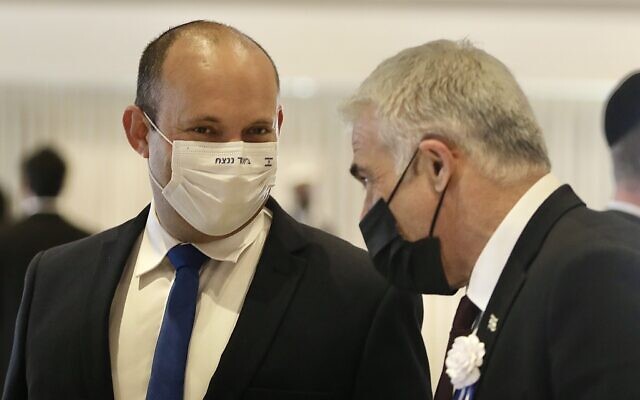 Party leaders Naftali Bennett (left) and Yair Lapid during the swearing-in ceremony of the 24th Knesset, at the Knesset building in Jerusalem, April 6, 2021. (Marc Israel Sellem/Pool)

“In this Israeli unity government, there will be three right-wing parties [Yamina, New Hope and Yisrael Beytenu], two centrist parties [Yesh Atid and Blue and White] and two left-wing parties [Labor and Meretz],” the Yesh Atid leader said Sunday. “That’s what unity looks like. When different people with different opinions decide to work together.”

Such a government would have the support of 58 Knesset members, not a majority in the 120-seat Knesset, but enough to outvote Netanyahu’s bloc of 52 supporters. It could also be supported from the outside by the Joint List or Ra’am.

“That’s our goal. To form a government whose strength will be drawn from its commitment to the good of the country. There will be different worldviews, but we are all Zionists. We are all Israeli patriots,” Lapid added.

If Netanyahu does not succeed by May 4 and Rivlin does not grant him an extension, the latter can either task a second person with the attempt (for another period of 28 days and a possible additional 14), or send the mandate back to the Knesset, giving the legislature 21 days to agree on a candidate supported by 61 MKs.

If the president appoints a second person and that person also fails to assemble a coalition, the mandate automatically returns to the Knesset for the 21-day period. During that time, any MK is eligible to attempt to form a government.

Rivlin has indicated that he may not give the mandate to a second candidate if Netanyahu fails, but rather immediately send it back to the Knesset. He also appears unlikely to grant an extension to Netanyahu before doing so. 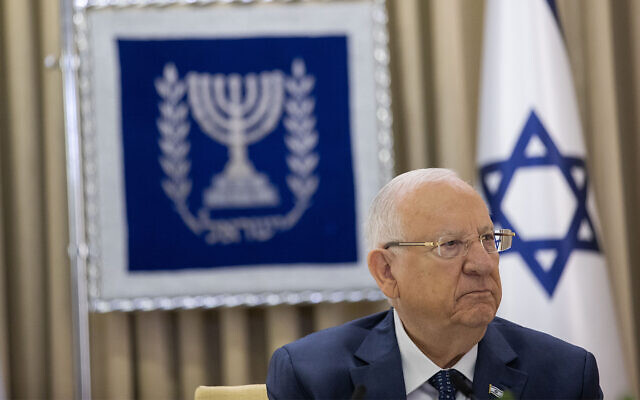 At the end of the 21-day period, if no candidate has been agreed upon by 61 MKs, the new Knesset automatically disbands and the country heads to yet another election.

Lapid’s efforts to form a coalition come as Netanyahu appears to be struggling to find 61 Knesset members willing to form a Likud-led government.

With Netanyahu lacking a clear majority following the March 23 election, multiple — and mostly improbable — scenarios have been floated on how he could reach the magic number of 61, including relying on outside support from the Islamist party Ra’am, despite opposition from far-right lawmakers including Bezalel Smotrich; trying to recruit “defectors” from other parties; and trying to get the New Hope party headed by Gideon Sa’ar to join such a coalition.

Netanyahu has been said to be trying to convince Smotrich, who heads the Religious Zionism party, to accept Ra’am’s support for a one-off vote that would allow the establishment of the government.

But on Sunday, Smotrich said that he would prefer a fifth rapid-re election or even a center-left coalition backed by either the majority-Arab Joint List or Ra’am parties (in which Smotrich would not take part), as opposed to a right-wing government backed by Ra’am.

“Fifth elections are also much better than this suicide,” he wrote in a Twitter exchange, responding to the suggestion that he allow the formation of a government backed by Ra’am. “And you know what, even a hybrid creature [of center-left parties backed by Arab Israeli parties] — that I think will not arise and if so then will last a few months and crash and the right will return stronger — is better than the destruction of the right and Zionism.”

Netanyahu, in a video statement on Sunday evening, urged Yamina and New Hope to join his party in forming a key parliamentary panel, after reports indicated Bennett could ally with the opposition parties on the committee.

The vote on the establishment of the Arrangements Committee — expected to be headed by Likud’s former coalition whip, and key Netanyahu ally, Miki Zohar — was set to take place on Monday.

The Arrangements Committee, the first Knesset committee to be formed after an election, determines which parliamentary committees will be formed and who will serve on them. Crucially, it also controls the legislative agenda in the new parliament until a new government is formed.

By allying with the anti-Netanyahu bloc on the makeup of the panel, Yamina would be seeking to hold the tie-breaking vote, thus cementing its power.

Sorgente articolo:
Lapid urges gov’t of ‘Zionists and patriots,’ says he expects to receive mandate – The Times of Israel