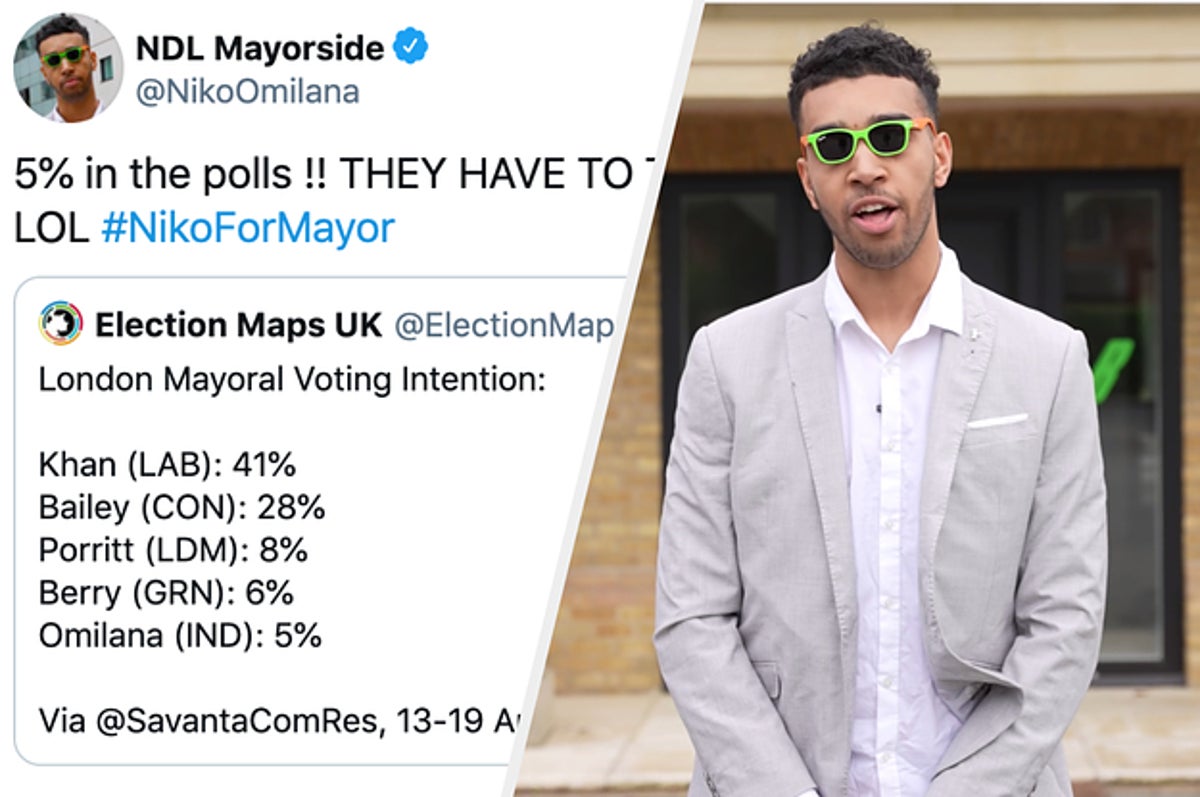 A British YouTuber who is running to be the mayor of London in the upcoming election has shocked cynics after polls showed him in fifth position, with a projected 5% of the vote. This makes him the most popular candidate not affiliated with any of the four mainstream parties.

Niko Omilana, 23, has nearly 3.5 million subscribers on YouTube alone, and more social media followers than all the other candidates combined.

In the latest polling by data company Savanta ComRes, current mayor Sadiq Khan, a Labour Party politician who was elected in 2016 with over 1 million votes, is shown losing ground — although he is still expected to win, according to ITV.

Omilana is one of 20 candidates in the election, which was originally scheduled to take place in 2020 but was postponed due to the pandemic.

The election is set for May 6, with incumbent Khan projected to win a second term, although perhaps not by as great a margin as previously predicted.

Omilana formally announced his campaign on April 2, in a video clip uploaded to Twitter. He introduced himself as the “founding father and supreme leader of the Niko Defence League,” known more commonly as NDL, which is what he has named his political party.

Omilana, who shared additional background information on his campaign in a recent YouTube video, said that his mayoral ambitions had been in the works since 2019.

“In 2019, I first teased the fact that I was going to run for London mayor in the background of a random YouTube video. In my merch in 2019, I put ‘NDL 2020’ as a nod to the election to come, and you guys have just been walking around promoting my campaign without even realizing it,” he said.

His campaign has gained the support of many fellow big YouTube stars, including Keemstar and KSI.

The content creator, whose channel is typically dedicated to pranks, challenges, and elaborate stunts, said that his decision to run for mayor was driven by an ambition to represent the voice of young people.

“Young people aren’t taken seriously in politics because the government don’t give us a voice, but we have a voice, my friends, so I’m trying to see what happens when we make as much noise as possible together,” Omilana said.

The YouTuber is no stranger to controversy and was once the target of right-wing abuse after he went “undercover” at a racist demonstration for one of his first viral YouTube videos.

At the time, he told BuzzFeed News, “I’ve had death threats, a couple comments saying ‘we’re going to find you and kill you,’ or they’ll say ‘we’ve already found your location — the whole of the right wing is coming for you,’ that sort of stuff. I think I’ve riled up a lot of people because the reaction to the video has been so positive and that has sort of set them up even more to try and make me scared when in reality I’m not really scared at all.”

The requirement for running to be the mayor of London includes a £10,000 deposit, which candidates only get back if they manage to secure at least 5% of the first-preference votes on election day.

Omilana’s full campaign manifesto has yet to be published, but in a plea to voters, he called the system broken and declared himself as “the only man who can fix it.”

Responding to the latest data, Omilana tweeted, “5% in the polls !! THEY HAVE TO TAKE US SERIOUS NOW LOL #NikoForMayor.”

Sorgente articolo:
A 23-Year-Old YouTuber Is Running To Be The Mayor Of London And Is Doing Relatively Well In The Polls – BuzzFeed News