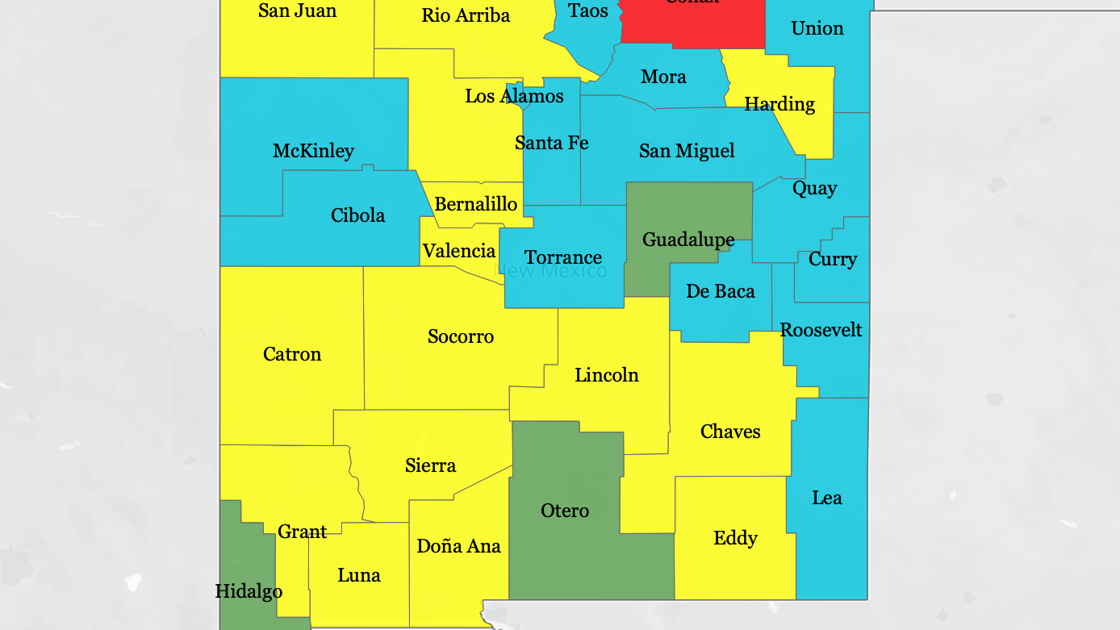 Most New Mexico counties saw no change in their level of COVID-19 risk, according to an updated color-coded map released Wednesday by state health officials.

But nine counties, including Rio Arriba, dropped to a lower tier after seeing an uptick in infections, meaning businesses in those counties will see more COVID-19 restrictions over the next two weeks.

After the updated map was released, Republicans renewed their call for Gov. Michelle Lujan Grisham to adjust or remove her system of designating counties as either red, yellow, green or turquoise.

“It is time for the Governor’s office to descend from their ivory tower of faulty statistics and delusion, and see the effects these policies have on regular New Mexicans,” state Sen. Cliff Pirtle, R-Roswell, said in a statement.

“Because of her failure to remove or adapt the lockdown framework, business owners from some counties now have their livelihood in jeopardy because of less than a dozen cases in the entire county,” he added.

Santa Fe County has been turquoise for a month after averaging eight or fewer new cases per 100,000 people and 5 percent or fewer positive tests over two straight reporting periods.

Colfax County in the northeastern part of the state was the only red county, which means its residents face the highest level of public health restrictions.

Twenty-four counties remained in the same tier or saw improvement in their health metrics. The state’s seven-day rolling average of new cases was 219 as of April 15, above a target of 168.

While he was disappointed that some counties have regressed to yellow or red, Scrase was optimistic that the state will continue to see progress in its fight against COVID-19.

“We will be an almost completely green and turquoise state by the end of May at the latest,” Scrase said.

“I believe that every time we vaccinate another 5 percent of individuals, we are closer to defeating this virus and come closer to getting everybody green,” he added.

“And as far as supply [and] demand, the good news today is we have now matched our supply with our demand. We have plenty of vaccine,” Dr. Tracie Collins, the state’s health secretary, said.

Health officials have detected three coronavirus variants in New Mexico — one that originated in the United Kingdom and two that came from California. The state has seen 142 cases of the U.K. variant and a total of 327 cases linked to the California variants.

“The good news is that we don’t have the South Africa or Brazilian variants in New Mexico at this time,” Scrase said.