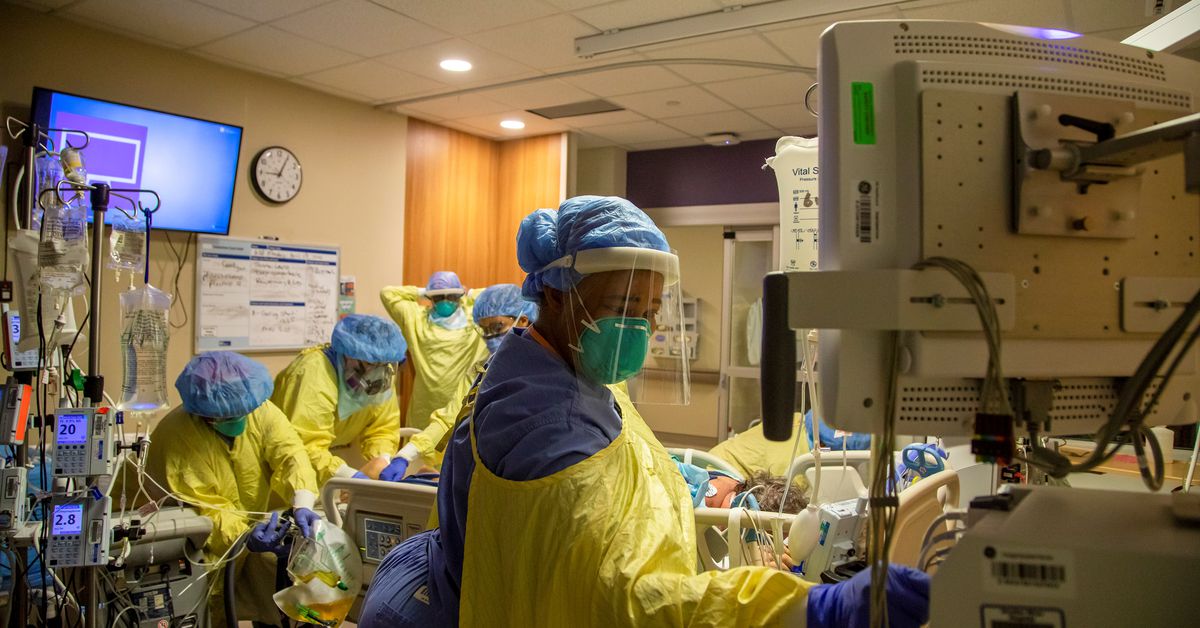 During that week, the ICU doubled the total number of pregnant COVID-19 patients it had previously seen throughout the entire pandemic. Swamped with patients with complex medical needs, one day Munshi ended up pulling a 36-hour shift.

Ontario’s hospitals and ICUs have been crushed by a punishing third coronavirus wave, as depleted resources and overworked staff push Canada’s healthcare system – often held up as a model for the rest of the world – to the brink.

Last week, Munshi and her colleagues spent agonizing hours discussing what to do if a pregnant woman needed an artificial lung to help her get enough oxygen.

“Having delivery equipment outside an ICU room is never a thing you want to be walking into at the beginning of your shift,” she said. “It just adds an added layer of unnecessary sadness to this whole pandemic.”

By Thursday, ICUs in Ontario, Canada’s most populous province, had 800 COVID-19 patients, with such admissions at the highest point since the pandemic began.

Patients are coming in younger and sicker, driven by more highly transmissible virus variants. Hospital staff say they are seeing whole families infected due to transmission at front-line workplaces that have remained open through lockdowns and stay-at-home orders.

Mount Sinai Hospital just added a third ICU. It has seconded non-ICU nurses to help deliver critical care to the most seriously ill patients as it braces for the worst.

“The next couple of weeks are going to be extremely busy, there’s no question,” Munshi said, adding that people most affected by the current wave do not come from privileged backgrounds that would allow them to protect themselves, for example by working from home.

The provincial government has promised more ICU beds and requested medical staff from other provinces.

‘HOW MUCH MORE CAN WE STRETCH?’

Ramping up vaccinations targeting high-risk communities will help bring the third wave under control, experts said. But that will not relieve the immediate pressure on hospitals.

Exhausted staff are pulling overtime shifts and doctors are bracing for the tipping point no one wants to talk about: The activation of a “triage protocol” that will dictate who gets critical care when there isn’t enough for everyone who needs it.

Ontario’s Ministry of Health did not respond when Reuters asked what criteria would activate that protocol.

The protocol provides a standardized way to predict who is more likely to survive the subsequent 12 months, “trying to prioritize so that the most lives could be saved,” explained Dr. James Downar, one of its authors.

It does not include a provision for withdrawing life-sustaining measures, he said.

Raman Rai, manager of the ICU at Toronto’s Humber River Hospital, said she has never seen such a volume of critical care patients.

The hospital has redeployed staff, is treating people in “unconventional spaces,” and is stretching resources so a nurse who might have been responsible for one or two patients now has three, Rai said.

“We have already gone over capacity,” she said. “How much more can we stretch?”

“If it is used, it means we’ve failed as a province,” he said. “This did not have to happen. But are we preparing with everything we’ve got? Yes.”

In Toronto’s Sunnybrook Hospital on Wednesday morning, the ICU was buzzing with health workers having bedside discussions, punctuated by alarms from pumps and various equipment monitoring patients’ vital signs.

“It’s particularly distressing when we see someone who is 30 years old and healthy who comes in unable to breathe,” said intensivist doctor Hannah Wunsch. She is also seeing younger patients, pregnant patients and whole families with COVID-19.

From a medical perspective much of the work is the same, Wunsch said – save for ubiquitous masks.

“I haven’t seen anyone smile in a long time.”