Palestinian terrorists in the Gaza Strip fired two mortar shells toward Israel after midnight Tuesday, with both projectiles falling inside the coastal enclave, the Israel Defense Forces said.

There were no reports of injuries or damage.

The launches triggered warning sirens in Israeli communities near Kissufim and came after a one-day lull in attacks.

The latest violence began late Friday night, when terrorists in the Strip launched at least 36 rockets and mortar shells at southern Israel, causing light damage in a number of Israeli communities near the border. The attacks resumed on Saturday night, when more than four rockets were fired toward Israel, some of them failing to clear the border and landing inside Gaza, and then again late Sunday night, when five more projectiles were fired from the Strip at southern Israel.

The security cabinet on Monday signed off on a major military response if terrorists in the Gaza Strip continue to fire rockets into Israel, after dozens of projectiles were launched from the enclave over the past three days.

Prime Minister Benjamin Netanyahu and Defense Minister Benny Gantz were authorized to determine what steps to take should the violence persist, according to Israeli officials.

The decision came following a security cabinet meeting in which defense officials presented a number of potential military options in response to further rocket attacks. The officials warned that a large strike on the Hamas terror group could lead to an outbreak of further violence not only in Gaza, but also in Jerusalem and the West Bank. 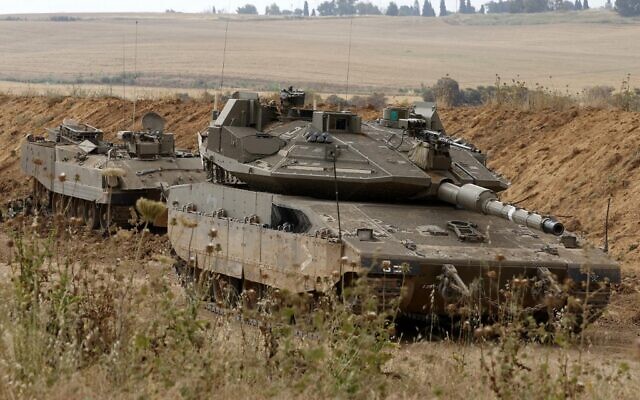 Israeli tanks are stationed along the Israel-Gaza border, on April 24, 2021. (JACK GUEZ / AFP)

The IDF responded to the Friday night attacks with strikes on Hamas infrastructure, but has refrained since then from retaliating violently. Instead, on Monday morning, the military announced it was closing the Gaza fishing zone until further notice, cutting off a major source of income for the beleaguered enclave.

The terror groups that conducted the launches — the Popular Front for the Liberation of Palestine and Fatah — said in statements that they were a response to ongoing unrest in Jerusalem, which has seen violence between Jews and Arabs, as well as clashes between Arab youths and Israeli police, in recent days.

The attacks and Hamas’s presumed approval of them have also been tied to internal Palestinian competition, ahead of elections that were scheduled for next month — the first elections in some 15 years — but which the Palestinian Authority has indicated it plans to postpone indefinitely.

Sorgente articolo:
After a day of quiet, Gaza terrorists fire 2 mortar shells toward Israel – The Times of Israel